HomeFeaturesNews“Shame on you, Mahinda, Shame!!!”. – FM Samaraweera responds to Rajapaksa. 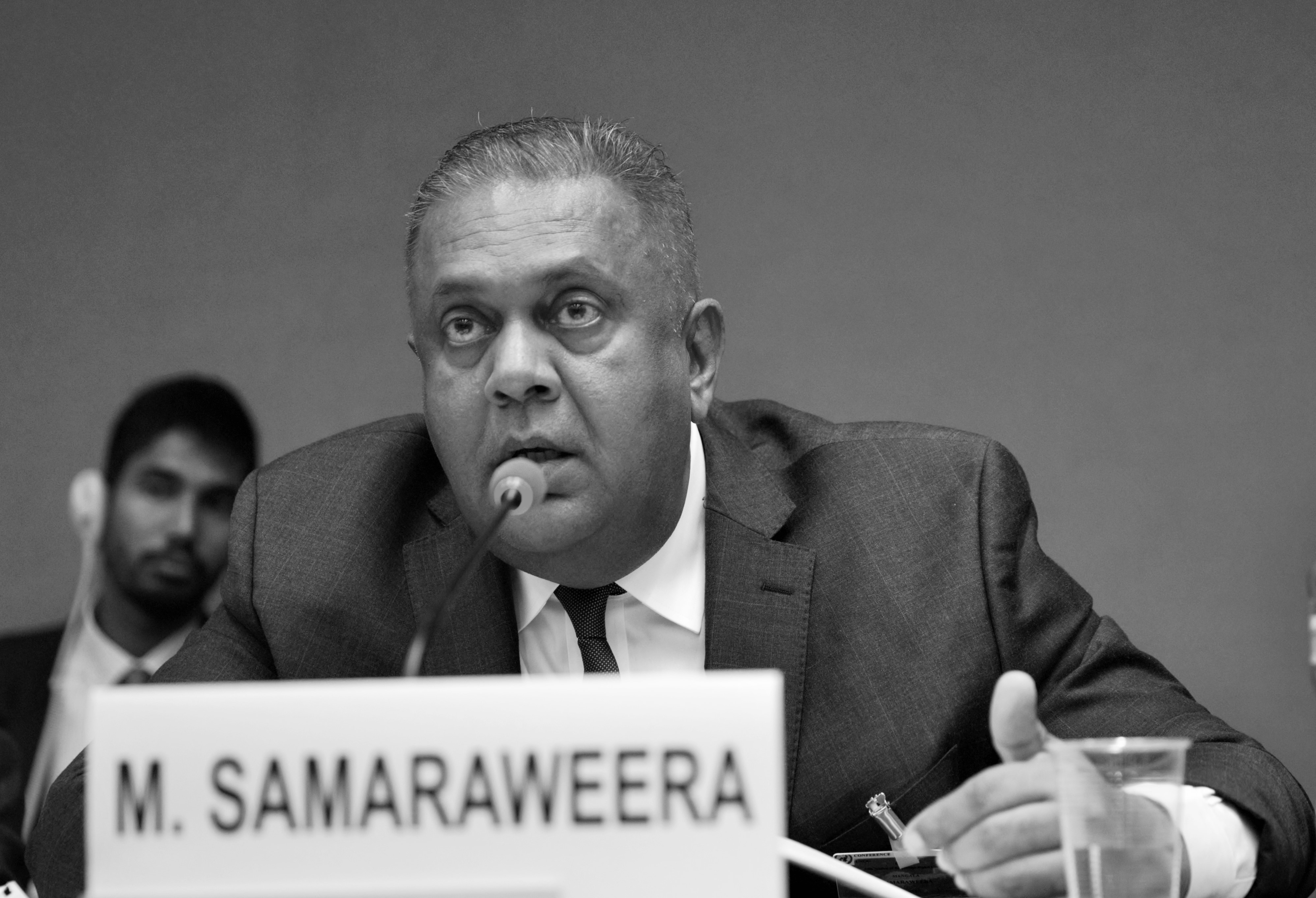 Image: Samaraweera speaking at a side event during the HRC 34 ©s.deshapriya.

On 13 March 2017 the former President of our country, Mr. Mahinda Rajapaksa, issued a media release titled “Constitutional and legal reforms to destroy the nation”.

My initial inclination, when confronted with statements as inaccurate, inflammatory and erroneous as those contained in the media release issued by Mr. Mahinda Rajapaksa, is to simply ignore them, as they would serve as the best self-indictment. However, when a former head of state seeks to deliberately cause division in Sri Lankan society by misleading the public, especially after years of conflict in which all communities have suffered, I felt that it is a serious matter that deserves a comprehensive response.

I now turn to the erroneous claims made by the former President, Mr. Mahinda Rajapaksa, in his media release. His entire argument hinges on the selective quotation and misreading of five key documents. So let me clarify what each of these documents represents:

The decision to co-sponsor resolution 30/1 was not imposed on us, and we will co-sponsor an extension of the timeline of this resolution by two years during the present 34th session of the Human Rights Council.

Why do we choose to do this? Because we believe in enhancing, not restricting, the fundamental rights of all our citizens. We believe that we will overcome a painful past by examining it, not by hiding it. We are convinced that we need to put a stop to the cycles of recurring violence that have hitherto hindered our progress as a proud, united country and a united people. We know that truth, reparation and justice are essential, and further, that international jurisdiction over serious crimes only applies when national jurisdiction fails. We are declaring our vision in a resolution before the world to demonstrate that, as an independent, sovereign, and responsible nation, we are fully able to pursue accountability, with our national capacities, and in cooperation with our friends and partners in the international community, thus restoring credibility to our judicial processes and building capacity.

Let me be very clear: the transitional justice mechanisms to be implemented will not benefit one group or community above others, and will certainly not single out and target the armed forces. The former President manipulates the respect that the Sri Lankan people have for the armed forces to hide his own responsibilities. This is opportunistic, and especially ironic, coming from the person who imprisoned the commander who led the armed forces to victory.

Everyone paid a heavy price during the conflict, including our soldiers, with patriotic devotion. It is fitting that all of us Sri Lankans enjoy the benefits of reconciliation including the families of more than 5000 missing military personnel, and the families of missing policemen whose whereabouts will be sought by the Office on Missing Persons. 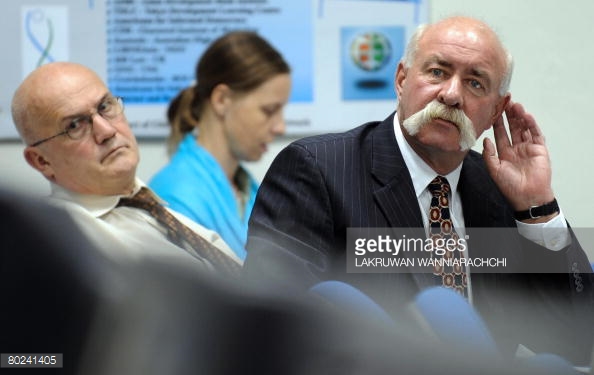 The International Independent Group of Eminent Persons was invited by Rajapaksa himself.

Former President Mahinda Rajapaksa, especially as a lawyer, is very well aware that the issue of foreign judges is mere exaggeration on his part, and he does this on purpose to mislead the public. Let us not forget that it was under his leadership that multiple transitional justice processes were initiated, and international prosecutors were engaged. The International Independent Group of Eminent Persons (IIGEP) established by him engaged foreigners invited by him, and also nominated by Australia, Canada, the European Commission, UK, Japan, the Netherlands, USA, the Inter-Parliamentary Union, the Office of the High Commissioner for Human Rights (OHCHR), and a Cypriot nominated by the Government of Sri Lanka. International prosecutors were also engaged in connection with the Paranagama Commission. Moreover, implementation of the thirteenth amendment to the constitution was for the first time made into an international pledge under his leadership through the much touted victory resolution S-11/1 sponsored by Sri Lanka and adopted on 27th May 2009 by the UN Human Rights Council. The resolution welcomed the “reassurance given by the President of Sri Lanka that he does not regard a military solution as a final solution, as well as his commitment to a political solution with implementation of the thirteenth amendment to bring about lasting peace and reconciliation in Sri Lanka.”

The former President, driven by his arrogance and neglect of duties and responsibilities towards our citizens, dragged our country into the first ever external investigation of a situation, through the OHCHR investigation on Sri Lanka (OISL). President Sirisena and Prime Minister Wickremesinghe, guided by wisdom, managed to regain trust and regain charge as an independent, sovereign and responsible nation, of the pursuit of reconciliation and accountability by national processes, shifting all action to the domestic front.

The former President chooses to hide these facts, and instead, interpret resolution 30/1 in a wildly unreasonable and illogical manner in order to drive fear into people’s minds and divide Sri Lankans in an attempt, as he mentioned to the Foreign Correspondents Association in December last year (2016), to realise his dream of returning to power.

(2) The reports of the six subcommittees appointed by the Steering Committee of the Constituent Assembly published in November 2016:

These reports are the result of deliberations in which all political parties have participated. Making these reports available to the public is a fundamental gesture of transparency and consultation unlike the action taken by the former President when he initiated the 18th amendment in hiding and in haste, causing serious damage to our country’s fundamental democratic credentials.

Many issues indicated in the subcommittee reports and beyond still remain to be discussed and resolved, and the reports certainly contain recommendations that may be supported by some, while being perceived as undesirable by others. Discussing these sensitive issues in the open, in a peaceful, calm, dignified and responsible manner, with a view to evolving a constitution required by a modern nation as stated by President Sirisena in Parliament on 9 January 2016, in a manner that all communities can support, is an endeavour that the National Unity Government is honoured to lead.

The people of Sri Lanka will ultimately judge the final proposals on their merits. They have that right guaranteed to them in the constitution which states that “In the Republic of Sri Lanka sovereignty is in the People and is inalienable”.

Our pledge is to explain all proposals with clarity and honesty without distorting facts or perceptions with divisive rhetoric as Mr. Mahinda Rajapaksa attempts to do.

(3) The Final Report of the Consultation Task Force on Reconciliation Mechanisms (CTF) published in January 2017:

The 11 civil society members of the CTF were appointed by the Prime Minister in January 2016, to seek the views of all Sri Lankans on the proposed reconciliation mechanisms, namely Truth-seeking mechanisms – an office on missing persons and a truth commission; a reparations system; and a judicial mechanism with a special prosecutor. The CTF is a fully Sri Lankan process, which received 7,306 submissions from all regions of the country, including citizens who in the recent past would have feared to express their opinions in public. The highest number of submissions was received from Batticaloa, Ampara and the Southern Province respectively.

We commend the CTF effort as a comprehensive and well-documented consultation process and report that incorporates views from all over Sri Lanka. The CTF process itself is a success in our view. It represents a departure from reconciliation mechanisms under Mr. Rajapaksa’s administration that lacked comprehensive public consultation and, as a result, lost effectiveness. This does not mean in any way that all the recommendations that have been made by the CTF will, or can be accommodated. What it does mean is that the views of our citizens from all communities and all geographic locations have been listened to, and have been heard, and that these views merit reflection and consideration. To pick and choose recommendations that may appear controversial to some, and use them to drive fear and create divisions among the public as Mr. Rajapaksa has done, is indeed diabolical.

The National Unity Government, under the leadership of President Maithripala Sirisena and Prime Minister Ranil Wickremesinghe, is determined to recover the favourable trade status Sri Lanka enjoyed before the government led by President Rajapaksa squandered it.

Like any entity considering a partnership, the EU requires countries to fulfil certain requirements pertaining to the fundamental rights of their respective citizens. This is how the EU seeks to convince its corporations and 500 million consumers to establish a privileged trade alliance with Sri Lanka, investing in our prosperity. The elements that the EU considers are consistent with human rights, the rule of law and good governance are also those desired by the people of this country. The Sri Lankan people deserve to enjoy the highest standards of human rights. How can anyone in his or her right mind deny the citizens of our country, the right to enjoy the highest standards of fundamental rights and freedoms as recognised by the conventions to which we are a party? Don’t our citizens have a right to enjoy the rights that other human beings in the world enjoy? Are our citizens less worthy or lesser humans? As a responsible and caring Government, we are committed to creating the trade and economic conditions required to improve the lives of all Sri Lankans, and also establishing a positive and fruitful relationship with the EU that will help us to achieve that goal on behalf of all our citizens.

I would like to state here that, in recognition of the conducive conditions that prevail in Sri Lanka at present, including the restoration of the rule of law, the EU has decided to resume the Annual Investment Dialogue with Sri Lanka from this year.

(5) The replacement of the Prevention of Terrorism Act (PTA) by a new counter terrorism law:

The PTA is an anachronistic piece of legislation from a conflict plagued past, which was misused by some to commit abuses for narrow political advantages. To suggest that replacing it with a modern law is unpatriotic is baseless. The security of all Sri Lankans including those who criticise the Government is something that the Government takes seriously.

A new Act will ensure that Sri Lanka’s security forces and intelligence officials can protect the State and the Public while respecting the physical and mental integrity of each citizen. If the former President wishes to imply that stopping the practice of torture is treasonous, we respectfully disagree. Torture has no place in modern, democratic Sri Lanka.

The National Unity Government will not govern by fear and lies. The National Unity Government makes no apologies for choosing the path of transparency, truth, justice, and reconciliation, upholding the dignity of all citizens. The future of our great nation will not have walls of fear and doubt that separate communities. Rather, it will be a bright, open and inclusive path that invites all to walk together side-by-side as equal citizens.

In conclusion, all I want to say to my old friend, Cabinet colleague and for a brief time “BOSS” is “Shame on you, Mahinda, Shame!!!”.