HomeNewsSituation AnalysisBallot Vs Bullet; Our experience shows that the Choice is not that easy – R. Sampanthan.

The choice should not be difficult, looked at superficially

But our experience shows that the Choice is not that easy

It is quite difficult, why is it not that easy?

It is because Human Society is so complex, so diverse as to necessitate that Governance is structured so as to meet such complexity and diversity.

It is the mode and the manner of Governance that decides the Choice between the Ballot and the Bullet. Governance in a country, is based upon the Country’s Constitution. Constitutions of countries play a vital role in the structure of Governance. Governance encompasses the exercise of Legislative Power, Executive Power and Judicial Power.

Each one of these fields of authority has a crucial impact on the manner in which a Country is governed, on the lives of people in relation to the Government, and in relation to each other.

The Constitution is therefore crucial. Different Countries frame their Constitutions as desired by them. It largely depends on the leadership that a Country provides to the framing of a Constitution .Wise leadership ensures that a country’s Constitution is largely based upon a reasonable Consensus. Consensus accommodates Diversity, it avoids Complexity. Human society is diverse ,it is complex. Societies in most countries are multilingual, multi ethnic, multi-cultural, and pluralistic in character, they vastly differ from each other.
Constitutional arrangements need to accommodate such diversity, such complexity. If there is such accommodation society is stable. Such stability promotes development, and is able to achieve peace and prosperity. Lack of such accommodation promotes discontent and conflict, instability, lack of development, absence of peace and prosperity.

The Ballot is the democratic way, based upon dialogue, a free exchange of views, and the making of choices based upon one’s judgment. It is a rational process, if this process fails, then it is the Bullet, which is not merely a response to discontent and conflict, but also the apparent means to seek a remedy to the perceived injustice.

We have the experiences of several Countries, both positive and negative where the Ballot has prevailed and been successful, and also where the Bullet has been resorted to with its painful consequences.

I would like to refer to my own Country, Sri Lanka, though small an important Country in the Indian Ocean region. SriLanka is a multi-ethnic, multi lingual, multi-cultural Country comprising of the Sinhalese who are the Majority and have their own distinct identity, the Tamils, and the Muslims who are numerically a minority and have their own distinct identities. This is accepted in Sri Lanka and is not a bone of contention.

The Country attained independence from Colonial rule in 1948.Before Colonial subjugation, there were Sinhala and Tamil Kingdoms in the Country, which were captured by different Colonial powers, differently, and at different times. These different territories were unified together in 1833 under British Colonial Rule.

All people, the Sinhalese, the Tamils and Muslims joined together in their demand to achieve Independence.

The political culture prevalent in Sri Lanka has unfortunately been that in order to achieve and retain political power the tendency has been to confer on the majority Community a supremacist position, in preference to truth justice and equality .It must be realised that this approach has resulted in Sri Lanka, not being able to attain its rightful place in the World.

The demand for a change in the structure of Governance has prevailed from shortly after Independence, the demand was made by the Tamil people in the North East who alleged that they were treated as Second class Citizens, that injustice was meted out to them, in matters relating to their Civil, Political, Economic, Social and Cultural rights. They were subjected to physical violence whenever they made just political demands .This happened for several decades without any retaliation from the Tamils.

The political demand of the Tamil people for necessary changes in the structure of Governance was democratically supported ,overwhelmingly ,by the Tamil people of the North East, at every General Election to Parliament from 1956-up to date and at every other election whether provincial or local for a period of more than Sixty years .

The democratic verdicts of the Tamil people were not given recognition .The Tamil people are thus being governed without their consent and against their will in violation of the Universal Declaration of Human Rights adopted by the United Nations.

After that, there was armed revolt by Tamil Youth for almost three decades .Such armed revolt commenced more than three decades after the country attained independence and after all democratic and political processes had failed .This was a classic instance, in which the Bullet filled the void created by failure in the process of the Ballot. It stresses the importance of respecting and recognizing the verdicts of the Ballot. Such respect and recognition is the surest way to dispense with the need for the Bullet.

The result of all this has been that up to fifty percent of the Sri Lankan Tamil population have fled the country and live in several Countries the World over. The Sri Lankan Tamil Diaspora is spread throughout the World. More than 150000 Tamils have been killed. During the armed conflict, all people Sinhalese, Tamils and Muslims suffered immensely. Further violence would result in more Tamils fleeing the Country.

The Conflict has received international attention and four resolutions have been adopted by the United Nations Human Rights Council in 2012, 2013, 2014 and 2015.

The resolutions deal with violations of International Human Rights Laws and International Humanitarian Laws by both parties to the conflict, the Sri Lankan State and the armed rebel outfit. The implementation of the resolution adopted in October 2015 is being currently reviewed by the United Nations Human Rights Council in Geneva. It deals with the Transitional Justice Process, issues pertaining to Land. Missing persons, detainees, and the evolution of Constitutional Arrangements that will bring about a just and acceptable political resolution to this conflict.

In recent times far reaching political changes have also taken place in Sri Lanka, through the process of the Ballot, through the democratic process. At an election prematurely called after the Constitution of Sri Lanka was amended to enable the then holder of office of President to contest even beyond the stipulated two terms, an authoritarian and insensitive regime which failed to be inclusive of all peoples who lived in the country, has been replaced by a new President and a new Prime Minister and Government through the process of the Ballot, emphasizing once again the utmost importance of the democratic process. This happened in 2015.

The new Government has committed itself to the making of a Constitution for the Country based upon Consensus and has commenced the process. The fact that the two main political parties are in alliance together in Government offers the Country a historic opportunity that was not available at the time of the making of the 1972 and 1978 Constitutions. The main Tamil Political Alliance in Parliament very largely representing the Tamil people of the North East is working with the new Government in its endeavours to formulate just and acceptable Constitutional proposals. The Tamil people are committed to evolving a just reasonable workable and durable political solution within the frame work of a single undivided and indivisible Sri Lanka. The parties largely representing the Muslim people are also a part of the process. For the first time in post independent Sri Lanka, an opportunity is available for the framing of a Constitution, based upon a substantial and reasonable consensus amongst political parties and all peoples in the Country. This opportunity must be pursued with genuine commitment. 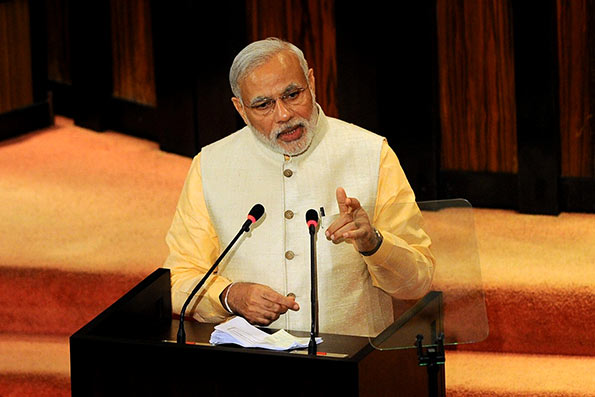 Before I conclude may I quote a paragraph from the speech delivered by Indian Prime Minister Shri Narendra Modi to the Sri Lankan Parliament on 13th March 2015. “For all of us in our region, our success depends on how we define ourselves as a nation. All of us in the region, indeed every nation of diversity, have dealt with the issues of identities and inclusion ,rights and claims, dignity and opportunity for different sections of our societies .We all have seen its diverse expressions. We have faced tragic violence: we have encountered brutal terrorism and we have also seen successful examples of peaceful settlements. Each of us has sought to address these complex issues in our own way .However, we choose to reconcile them.to me, something is obvious: diversity can be a source of strength for nations.

When we accommodate the aspirations of all sections of our society, the nation gets the strength of every individual .And when we empower states, districts and villages, we make our country stronger and stronger. You can call this, my bias. I have been a Chief Minister for 13 years; a Prime Minister, for less than a year!

Today, my top priority is to make the States in India stronger. I am a firm believer in cooperative federalism .So, we are devolving more power and more resources to the States and we are making them formal partners in national decision making processes.

Sri Lanka has lived through decades of tragic violence and conflict. You have successfully defeated terrorism and brought the conflict to an end. You now stand at a moment of historic opportunity to win the hearts and heal the wounds across all sections of society. Recent elections in Sri Lanka have reflected the collective voice of the nation: the hope for change, reconciliation and unity. The steps that you have taken in recent times are bold and admirable. They represent a new beginning.

I am confident of a future Sri Lanka defined by unity and integrity, peace and harmony and opportunity and dignity for everyone. I believe in Sri Lanka’s ability to achieve it. It is rooted in our common civilizational heritage. The path ahead is a choice that Sri Lanka has to make and it is a collective responsibility of all sections of the society and all political streams in the country. But, I can assure you of this: for India, the unity and integrity of Sri Lanka are paramount .It is rooted in our interest. It stems from our own fundamental beliefs in this principle”