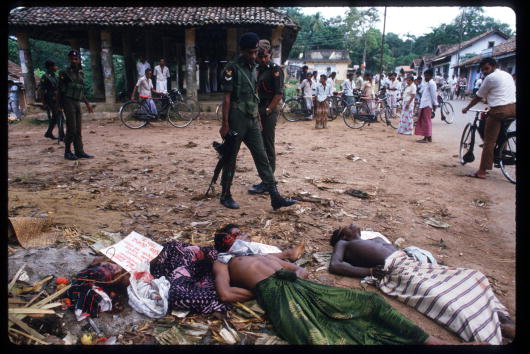 Image:Bodies of JVP followers killed by the PRRA lie on the ground with posters tied around their necks in Tihagoda. The sign says, ”This is the punishment for followers of the JVP signed by the PRRA.”December 1989 (Photo by Robert Nickelsberg/Liaison)

In a mood of heady euphoria following on the election victories in 2015 the Government went to the extent of co-sponsoring a Resolution at the UN Human Rights Council in Geneva that according to the Pathfinder Foundation (Island of February 18) had an unprecedented 23 introductory paragraphs that set the stage for 20 operational paragraphs. The Government has subsequently found, unsurprisingly, that it is difficult to implement some of the massive commitments it has made. In some cases, it might even be impossible to do so. What should the Government do? Foreign Minister Mangala Samaraweera is obviously confident about getting more time for implementation at the forthcoming March Session of the UNHRC. But what if we have to keep on asking for more time at further Sessions as well?

We must bear in mind, above all, that successive Sri Lankan Governments have had a shameful record of reneging on commitments made on the ethnic problem. With that backdrop in mind we must avoid giving the impression that we are deliberately prevaricating and temporizing over commitments made in Geneva, that we want to circumvent Geneva, to trick and outwit those to whom commitments have been made. The consequences of giving that impression could be unpleasant, even dangerous for Sri Lanka. In this context we must resist the Sri Lankan propensity to be paranoid about foreign intervention in our affairs. India would almost certainly like to see as quick a solution to the ethnic problem as might be possible, and there is no earthly reason why the West would want to see it prolonged. Both the Sinhalese and the Tamils within Sri Lanka, who have suffered the most from the ethnic problem, would want to see it quickly resolved. Only the LTTE and its backers in the Tamil Diaspora would want to prolong it in the hope that that could lead to Eelam. The totally intransigent hardliners among both the Sinhalese and the Tamils are very probably in a minority. The conditions certainly seem propitious for moving towards a solution.

A way out in Geneva

The writer is not proposing a programme of action to be followed at the UNHRC meetings. What is being proposed is a strategy that could lead to a partial implementation of what is required in the UNHRC Resolution. The strategy is to explain to the interested parties – the US, India, Canada, the EU etc. – that there are matters on which no Government in Colombo can be expected to deliver fully. On such matters no more than a partial delivery can be expected. What is important is for the Government to show that it is really in earnest about reaching a definitive solution of the ethnic problem. That should not be regarded as a condition impossible of fulfillment.

There are two particularly important problems in that connection: one is the problem of war crimes; the other is the devolution package. Regarding action on war crimes, a major problem is that it is bound to be one-sided. Even the most impartial action is bound to lead to one-sided outcomes. Investigations into war crimes perpetrated in the final stages of the war could well lead to the incrimination of the former Defense Secretary Gotabaya Rajapaksa, a potential Presidential candidate, and even top-rank Sinhalese politicians not excluding former President Rajapaksa and the present President Sirisena. If indeed it is true that war crimes were perpetrated on a horrendous scale at the final stage, part of the blame should surely be assigned to the LTTE for the utter subhuman cruelty shown towards fellow-Tamils in transforming 330,000 of them into human shields. But all the Tamil leaders responsible for that are safely dead. Likewise, over child soldiers and all the other horrors perpetrated by the LTTE over the decades, the leaders are for the most part, or are entirely, safely dead. Consequently, even the most impartial investigations will inevitably lead to one-sided conclusions that can be expected to embitter and outrage the Sinhalese masses. It will be agreed that that is not quite the best way of promoting ethnic reconciliation. Another problem is that of the participation of foreign judges but that apparently can be solved by making them participant-observers. 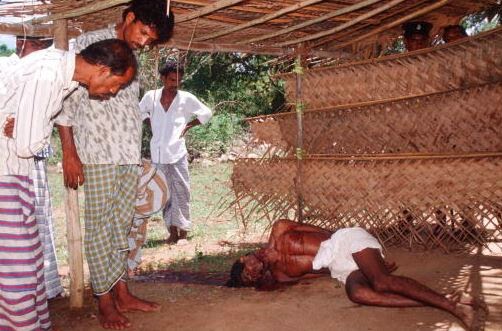 It must be acknowledged however that there is a strong case for war crimes probes. The principle underlying it is that either we must punish crime or we cease to be a civilized society. Furthermore we must bear in mind that the culture of impunity went very far, not just under the last Government but over the decades. A further point that the Sinhalese must bear in mind is that the culture of impunity applied equally to them as much as to the Tamils. How many died by the second JVP insurrection? More precisely the question that has to be asked is this: How many of the Sinhalese youth were butchered indiscriminately? Sometimes the figure mentioned is as high as 100,000. There is no way of making even a reasonable guesstimate because there have never been any appropriate investigations. The writer will mention just one chilling detail. A distributor of foreign films found that one film had tremendous youth appeal in different parts of Sri Lanka but not in a whole swath of southern territory. He sent two of his men to try to establish the possible reasons. No elaborate sociological field-work was required because the reason became apparent in two minutes: that film had no youth appeal in that area because there were no youths there, the entire lot having been indiscriminately butchered or made to disappear in the course of the insurrection. So, on the one hand there is an unanswerable case for investigating alleged war crimes, while on the other there is an unanswerable case for shunning it because the task of ethnic reconciliation will be made even more difficult. What is the way out? All that the writer can say is that at the UNHRC such complexities and dilemmas must be borne in mind.

The other particularly important problem that has been mentioned above in this article is that of the devolution package. This is a problem on which the writer has written many articles, so that he can be very brief about it here. There are specifics in the devolution problem here that don’t apply anywhere else. The Tamils are in a minority in Sri Lanka but regionally they are in the majority taking into account the 60 million Tamils in Tamil Nadu. Those Tamils can never ignore what might be done to the Tamils here, and that fall-out can never be ignored by the Government in Delhi. The inexorable force of globalization will mean that our Tamils will experience a greater and greater gravitational pull towards Tamil Nadu. Furthermore, the geopolitical situation has altered to a very significant extent with the emergence of China as a great power, which could drive Delhi to desire some degree of control over Sri Lanka. Because of these factors the Sinhalese can be expected to be even more wary about devolution than in the past. Why not therefore try to work out a solution through a fully functioning democracy, a dispensation under which our Tamils in the Diaspora are living quite happily in the West?

There is one point made by the writer in earlier articles that has not been understood, which therefore requires elaboration in a further article. It is assumed that India in insisting on the full implementation of 13 A on a model of devolution that has successfully held India together over many decades. That is a very serious misconception. The basis of devolution in India is linguistic, and that has been successful because there have never been serious antagonistic centre-periphery relations because of linguistic divisions. Antagonistic relations in India arose because of religious divisions between Hindus and Muslims. The important point is that India has not given the Muslims devolution on the basis of religion. In Sri Lanka antagonistic relations have arisen because of what is regarded as ethnicity, and therefore devolution on the basis of ethnicity might be expected to aggravate the antagonism. A model that downplays ethnicity and stresses transethnic commonality should work better.