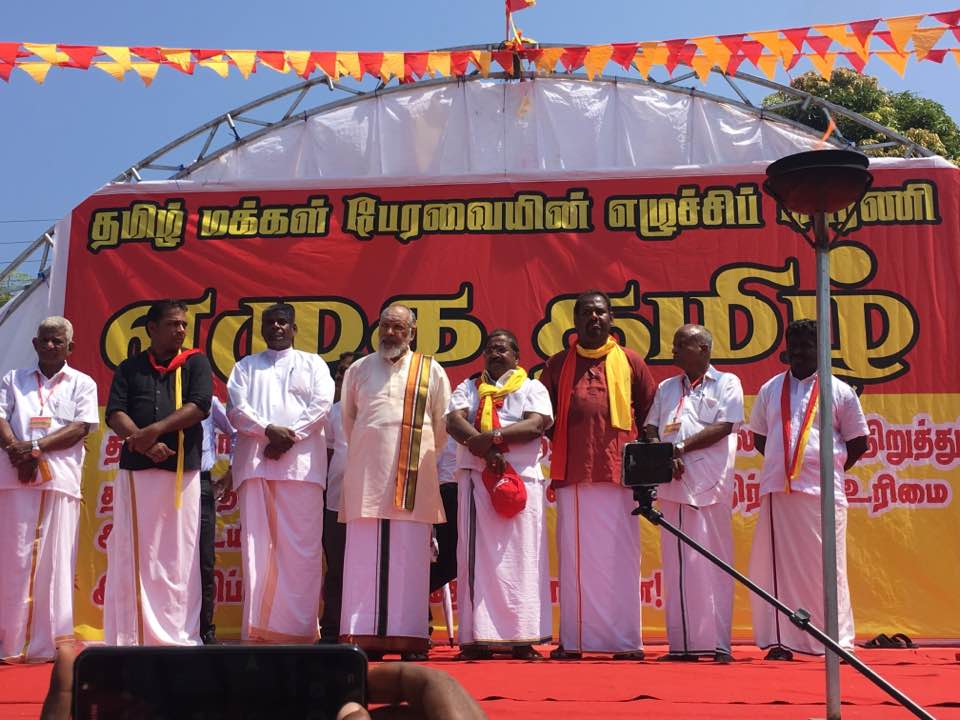 The “Ezhuga Thamizh” rally held in the Eastern city of Batticaloa on February 10, 2017, organized by the Tamil People’s Council (TPC), with the participation of civil society movements, and political parties — is a unified sovereign voice of the Tamil nation.

The Tamil nation which has been subjected to an oppressive Sinhala- Buddhist majoritarian ideology on the island of Sri Lanka for several decades, would like to—through this “Ezhuga Thamizh” rally—stress to the Government of Sri Lanka and international stakeholders that it shall never give up its legitimate political aspirations.

The North and East is the traditional homeland of the Tamil people of Sri Lanka. Consecutive Sri Lankan governments have specifically targeted the East for State- sponsored Sinhala colonization, thereby dismantling our lands, economy, culture and language. Above all this has resulted in the disintegration of the Tamil identity and the collective existence of the Tamil people. Against the backdrop of decades of such systemic State- sponsored colonization, this rally resolves that for the Tamil nation to be safeguarded, its lands, language, economy, culture and its distinct identity must be safeguarded together, concurrently. Based upon this, we, the Tamil people of the East categorically declare at this rally held in Batticaloa today (10th), that the distinct socio- cultural and political identity of the Tamil nation can only be guaranteed and safeguarded by the establishment of a non- divided autonomous unit of self- government in the North and East, and that this is non- negotiable. 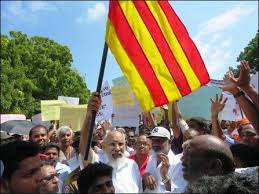 Wugneshwaran leading Ezhuga Thamizh in Batticolao with their flag of LTTE colours.

While this rally resolutely demands that inalienable political rights of the Tamil people be fully guaranteed, it is no less resolute in advocating for inalienable rights to be guaranteed of an irrefutable part of the Tamil nation—our Muslim brethren. This rally would also wish to make it clear that individual rights and liberties of the numerical minority within the Tamil nation, the Sinhalese, should never be forfeited.

Further, this rally today wishes to reiterate every point raised in the declaration below made at the “Ezhuga Thamizh” rally held in Jaffna on September 24, 2017:

1. Sinhala colonies, Buddhist temples and Buddha statues are being aggressively constructed with military sponsorship and the tacit approval of the government of “Good Governance”, with the sole purpose of Sinhala- Buddhisization of the North- Eastern Tamil homeland, alteration of the demography of the North and East and the bifurcation of Tamil speaking areas. This rally demands that the government immediately halt all efforts to alter the demography of the North and East through Sinhala- Buddhisization and settler colonialism.

2. Seven years after the end of the war, the North and East remains heavily militarized. Not only has this occupying military appropriated thousands of acres of land in the North and East, but it continues to appropriate more land, even under this regime. Further, the Army substantially disrupts the civilian economy by engaging in tourism, agriculture, and other businesses. The security forces continue to intervene in the day to day civilian administration of the North and East. This has resulted in the Tamil nation having to depend on the Army to sustain its nascent economy. Further, the social fabric of the Tamil nation continues to be eroded by heavy militarization and deep surveillance of the North and East, and has disrupted the Tamil people from collectively exercising their freedom of assembly to demand that their political aspirations be heard. Sexual violence perpetrated against women and children has placed the most vulnerable of community at the mercy of the occupying forces. This rally demands that the occupying forces immediately leave the North and East and that a genuine and fully fledged civilian administration is enabled in the North and East.

3. The Tamil people have repeatedly and firmly rejected a domestic accountability mechanism to investigate crimes perpetrated on them. In his statement of September 2015, the UN Human Rights Commissioner, Zeid Hussein categorically stated that Sri Lanka’s judiciary is incapable of investigating crimes committed during the war. Against this backdrop, the resolution passed in September 2015 at the United Nations Human Rights Commission suggested a hybrid mechanism to investigate these crimes. Yet, the Government of Sri Lanka, which co- sponsored this resolution with other international stakeholders, has now reiterated that it would not be amiable for the participation of foreign judges in the accountability mechanism. It has rejected a hybrid mechanism and has suggested a domestic accountability mechanism. The Government has now requested for more time to establish this mechanism. Against this backdrop, the Tamil people reiterate that the Government of Sri Lanka not be afforded any more time, and unequivocally and unanimously declare that only an international investigation into the genocidal crimes perpetrated against the Tamil people would bring them justice.

4. For 35 years, thousands of Tamil women and men have been arbitrarily detained under the Prevention of Terrorism Act (PTA). Some have been detained without any charges for 15- 20 years. Although the present government assured the international community that it would repeal the PTA in September 2015, it has failed to act on its promise. Tamil women and men continue to be detained under the PTA to this day. This rally calls for an unconditional and immediate release of political prisoners and the immediate repeal of the PTA.

Similarly, Tamil fishermen of the North and East also continue to lose their livelihoods to fishermen from South India, who too engage in illegal fishing methods.

This rally vehemently condemns the poaching of marine resources of North Eastern fishermen and demands that the rights of Tamil fishermen, who earn a daily wage, be protected.

On the political solution to the National question:

This rally declares that a federal solution based on the constitutional proposals submitted by the Tamil People’s Council (TPC) be adopted to ensure non- recurrence of the direct and indirect consequences of the war described above, and as a solution to the Tamil National question.

Although this government has assured the international community that the proposed 3rd Republican constitution of Sri Lanka will bring about a resolution to the Tamil National question, the President and Prime Minister of Sri Lanka continue to stress that the unitary character of the State and the pride of place afforded to Buddhism will not be altered in the constitution. We strongly believe that this government is attempting to force an ill-defined minimalist devolution scheme within a unitary State on the Tamil people. We are also concerned that the government is attempting to hurriedly pass the proposed constitution in Parliament and win the approval of this minimalistic constitution at a referendum, with the support of the majority of the Tamil people through deceit and lies. This strategy, we believe is being pursued to enable the government to proclaim that it has solved the Tamil National question through the proposed 3rd Republican constitution without in fact addressing the basic political aspirations of the Tamil people.

1. We firmly state that given the lessons learnt from the implementation of the 13th Amendment to the present constitution and the political culture nurtured through the Sinhala- Buddhist majoritarian State structure over the past 60 plus years, that any form of solution within a Unitary State would never provide the solution to the Tamil National question.

2. We believe that a viable solution to the Tamil National question could only be achieved by establishing a sovereign institution of self-government which recognizes the Tamil people of the North and East as a distinct nation, while acknowledging and respecting their right to self- determination, as proposed in the constitution proposals submitted by the Tamil People’s Council (TPC).

3. We further state that recognition the Tamil nation and thereby its right to self-determination as per (2) above could be institutionally provided through a federal structure.

4. This rally further stresses that a solution that is half-baked and ambiguous and one which does not recognize the distinctness of the Tamil nation and its right to self-determination can never be accepted as a final solution to the Tamil National question.