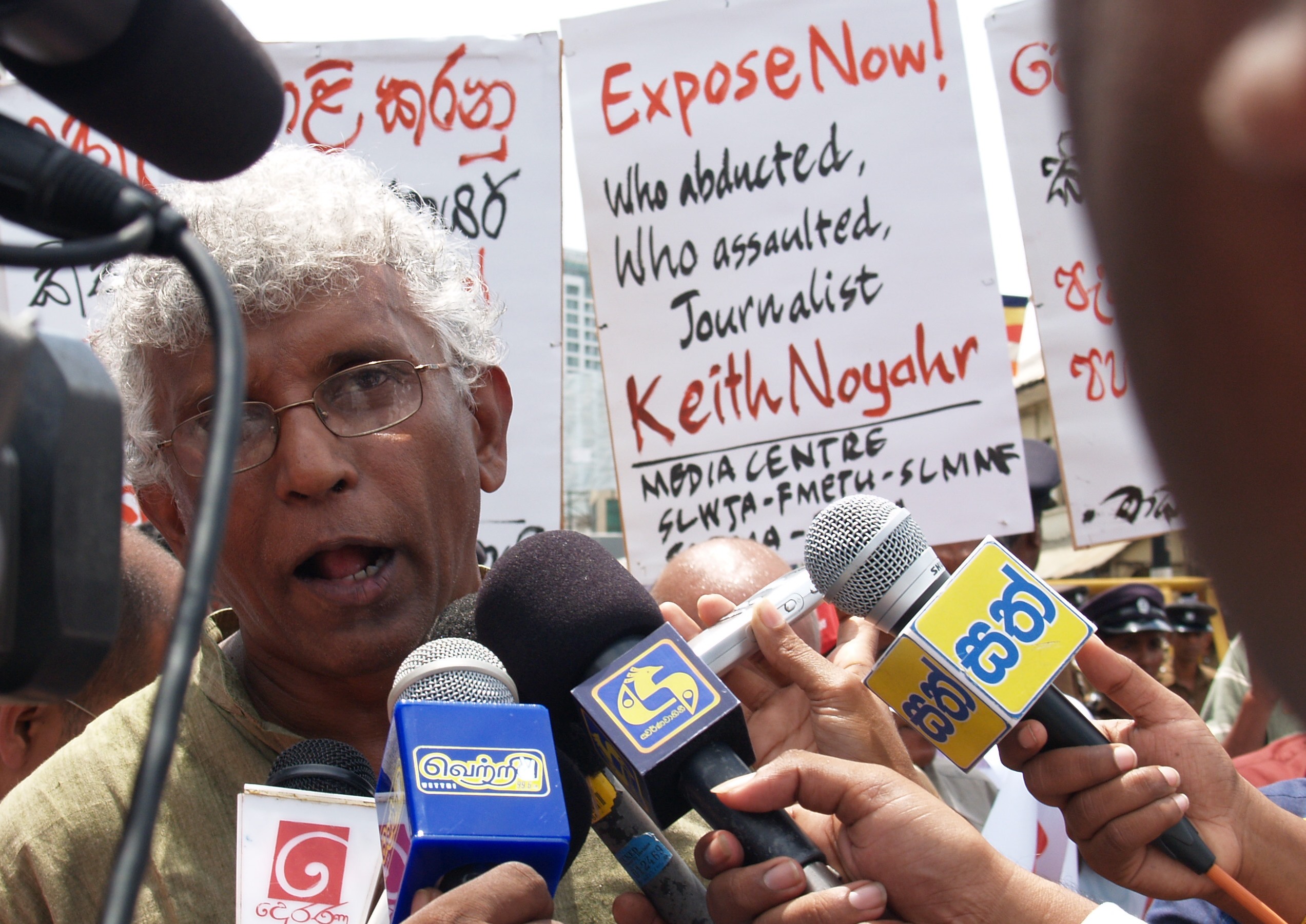 Image: Editor Sri Lanka Brief, then FMM convener speaking to press during the protest calling for speedy impartial instigation in to abduction and assault of  Keith Noyar.

Sri Lanka’s police made a breakthrough Saturday in their investigations in to the abduction of journalist Keith Noyar by arresting three military personnel, including an officer holding the rank of major reports Economy Next.

Police headquarters in a statement hhas said the three military personnel were arrested in connection with the May 2008 abduction of Noyar, a then deputy editor of the Nation weekly.

The three men, all serving military personnel, were being questioned by the police and they were due to be taken before the Mount Lavinia magistrate later Saturday, the statement said.

Military spokesman Brigadier Roshan Seneviratne had confirmed that the trio were still in the service.

Day after the abduction and assault of journalist Keith Noyar the Free Media Movement issues a following statement, which provides the context and  the seriousness of the incident.

The Police on 18th Feb.  arrested two more suspects in connection with the 2008 abduction, assault and false imprisonment of senior journalist Keith Noyahr. The Police said the two suspects were Corporals of the Army and they had been arrested by a special team from the CID in the wee hours of yesterday. The Police said the arrested suspects were currently under interrogation and they would also be produced before the Mount Lavinia Magistrate Courts later in the day. 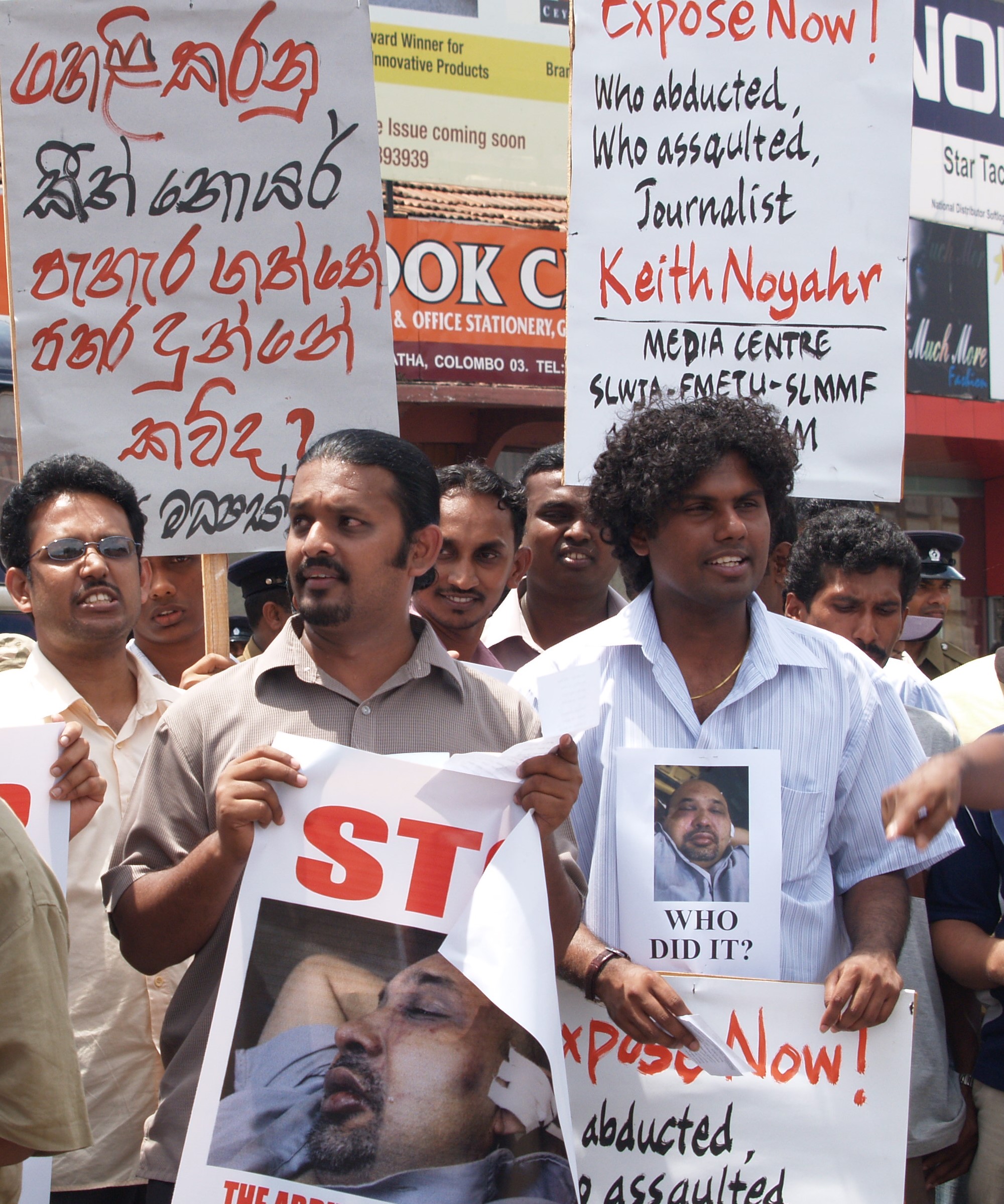 Keith left his office around 10.30pm last night but never reached home.  His vehicle was found in front of his house, lights and engine running.  It was apparent that he had been abducted when he turned his car towards the gate and got down to open the gate.

There is no other reason for this latest attack against a journalist than his independent writing and analysis of the war in the North, if that is reason at all.  His reporting was critical of high-ranking military officers and the Government’s approach to and conduct of the war. According to family sources the FMM learns that threats directed against him had forced him to take precautionary measures.

This is not just a violation of the freedom of expression and another significant blow to media freedom. It proves, as if more proof was needed, that Sri Lanka is very far from a country that protects fundamental rights and is governed by the rule of law.

The Nation newspaper group and press freedom organizations joined together in a strong campaign for his safe release within hours of his abduction and were active the entire night until his return home.

The FMM unequivocally condemns this heinous act and demand an immediate inquiry from the Government.  The only way the Government can clear its hand from this barbaric act is to bring the culprits to the book, urgently and through an open investigation. Until such time culprits are brought to book, the FMM holds the Government responsible for abduction and assault of journalist Keith Noyahr, noting that it has done little or nothing to stop the violation of media freedom and attacks against journalists in Sri Lanka.

The FMM takes this opportunity to thank all the persons and institutions who joined us in facilitating Keith Noyahr’s return home.

Criminal Investigation Detectives yesterday arrested an Army officer and two Sergeants over the May 2008 attack on journalist Keith Noyahr. The arrests came after the trio were summoned to CID headquarters on Friday and interrogated. The trio are Major Prabath Bulathwatte, Sergeant Duminda Weeraratne and Sergeant Hemachandra Perera. The formal arrests were made yesterday after interrogation overnight. Two more soldiers from the Army’s Military Intelligence are now being interrogated.
Probing the case was a CID Task Force that has been investigating a string of incidents – murders, abductions and assaults on media personalities. They included the killing of Sunday Leader Editor Lasantha Wickremetunga, the disappearance of Lanka E-news journalist Prageeth Ekneligoda and the attack on Rivira Editor Upali Tennekoon.

The three suspects were produced before the Additional Magistrate A.T.N. Fernando at her residence yesterday by Inspector Nishantha Silva. He told the Magistrate that the evidence collected through mobile phone records corroborated the accounts given to CID detectives by witnesses including family members. He also told the Magistrate that Mr Noyahr, then Associate Editor of the Nation and now domiciled in Australia, was followed for hours by his abductors before he was seized from his Dehiwala residence.

Inspector Silva said that the suspects had taken Mr. Noyahr to a Military Intelligence hideout in Dompe and tortured him. They had wanted to know the sources of the stories he had revealed in his newspaper. He said the suspects had planned to kill Mr. Noyahr but had brought him back to a location near his home after a telephone call came from a VIP.

Counsel who represented the three Army personnel submitted that their clients were being politically victimised since Mr. Noyahr was not even in the country to testify. They said their clients should be produced in courts so they will receive a fair hearing. Additional Magistrate remanded the suspects till March 3 but directed the CID that they be produced in Courts on February 23 in keeping with the request by the counsel.

CID sources said the three suspects were all members of a secret military intelligence platoon operating out of a camp at the Tripoli market in Maradana during the previous regime. A further three suspects are now being interrogated at the CID headquarters over this incident and other attacks. CID sources said more arrests were to follow.

Military spokesman Brigadier Roshan Seneviratne confirmed to the Sunday Times that the Army Major and two others had been arrested. He said all three were attached to Military Intelligence. He said the Army would render any assistance the Police would seek on the matter.
Sunday Times