HomeFeaturesSellamma & her struggle to reclaim her house and land in Puthukudiyiruppu 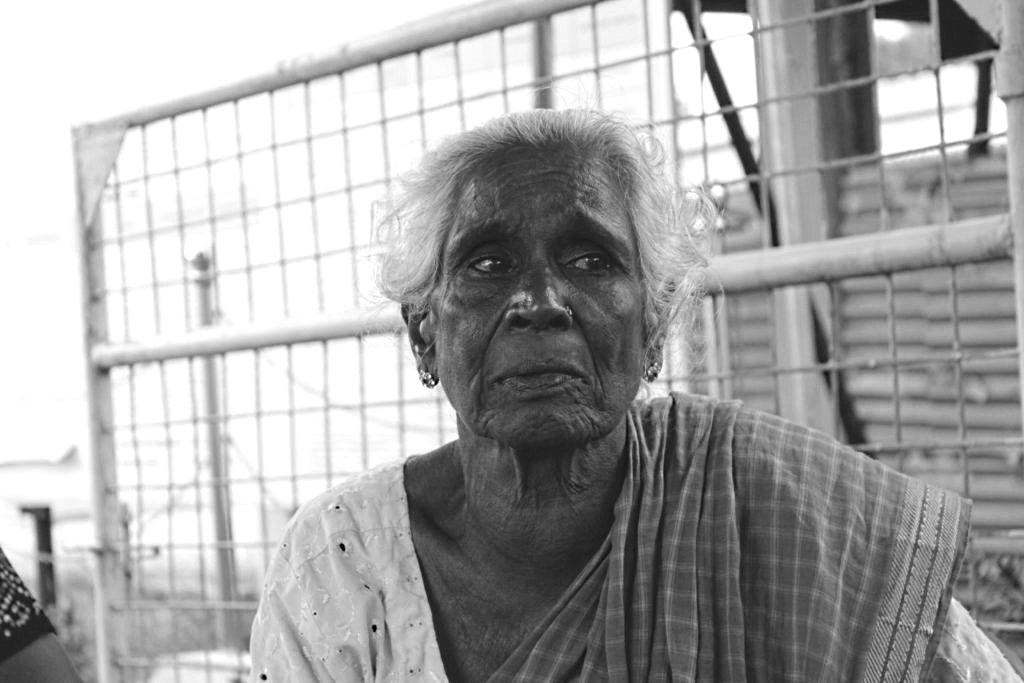 Sellamma is 83 years old. She has a house in Puthukudiyiruppu (PTK) East, Ward no. 7, in the Mullaitivu district in the Northern Province. It’s opposite the PTK Divisional Secretariat (DS). But for more than two weeks, she has been braving the hot sun and cold nights on the street, opposite her house. Because her house and land is occupied by the Army. In fading light of evening, and beyond an Army watchtower, she showed me her house. I was tempted to take a photo of her house, as I had her – the owner’s – permission. But I restrained myself to avoid potential trouble.

Sellamma’s son and son in law were killed by the Army during a massacre in 1985. They were amongst the 24 killed that day by the Army. Her husband died in 2014. She wanted to keep his body and have the funeral in their own house and land. But she couldn’t as the Army was occupying her land. She had tried to douse herself in kerosene oil and burn herself in protest, but others had stopped her.

Sellamma is feeble now. She has one wish before her death. “I want to live and die in my own house and land”, she told me. “I had a lot of coconut trees in the garden. But now, the Army plucks them and I have to buy coconuts. And the Army lives in my house and I have to pay a rent of Rs. 8,000 now” she also told me.

Magaret Karunannathan is 68. She says there were 42 coconut trees in her land. In the same village as Sellamma. Her husband was also killed by the Army in the 1985 massacre.

Both of them, and the whole village, and district, was displaced in 2009. They suffered a lot. Later, they were detained in Menik Farm. They were eventually released, but never allowed to return to their own homes and lands. While they were displaced and detained, the Army had occupied the lands of 49 families spanning 19 acres. Till today. I was told some of the villagers have legal documentation such as deeds, permits and grants. 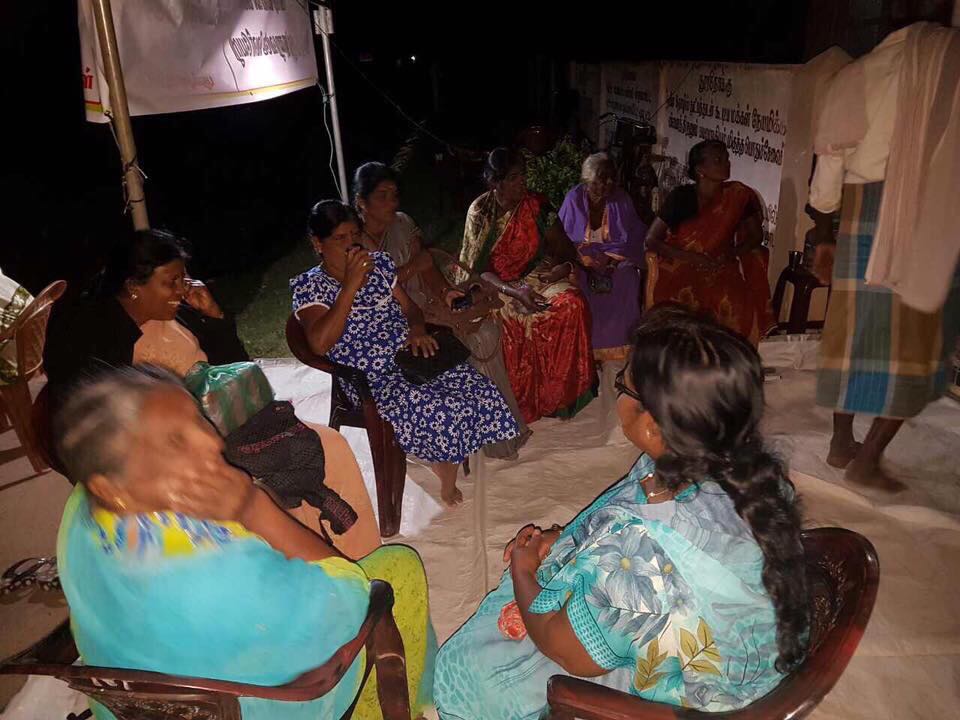 Puthukudiyiruppu protest at night, Sellamma is in the back 2nd from left.

The villagers had protested several times before, demanding their lands and houses from the Army. They started another protest on 3rd Feb. 2017. This time, they were determined not to give up the protest till they were actually allowed to go back to their lands. They cook by the roadside, sit there during the day and sleep there during the night. And stare at their houses and lands across the road.

They were suspicious of me when we went, and asked whether I was also from the Army.  Later they became more friendly. They were tired of talking to visitors and repeating their story. But they still told it.

On 9th Feb., some of them had travelled all the way to Colombo and met the Prime Minister (PM). Despite the Army occupying their lands and killing some of their family members, the people had suggested to the PM to let the Army stay in adjoining state land. According to them, the PM had spoken to the Government Agent (GA) for the Mullaitivu district and promised to attend to the matter after a trip to Australia. The PM had asked them stop the protest. People had told him that they will stop the protest when they were allowed to go back to their lands. The PM had apparently no answer to that, and told them they can continue their protest, but requested them not to cause any obstructions. I wondered whether the PM can tell the Army not to not to obstruct people from going back to their own houses and lands.

Into the 3rd week of protesting and 10 days after meeting the PM, there has been no positive response from authorities. So the people have escalated their protest to a fast, taking turns to fast. They are not asking any favors. They are only asking a wrong to be put right. To be allowed to go back to their own lands and houses.

Their struggle is just one of many struggles of displaced people to go home. Since the new government came into power, some of the lands occupied by the military have been released. But tens of thousands of displaced Sri Lankans await the military to move out of their lands and allow them to go home. From nearby Kepapulavu to Mullikulam to Ashrafnagar to Panama to Jaffna. And more. The list is long. They have been protesting, appealing to authorities, filing court cases. And still waiting.

For Sellamma and all these peoples, reconciliation is about being allowed to go back to their houses and land. Whether and when they get their lands back will be a major factor in Sri Lanka’s reconciliation and transitional justice processes. Government and others say these processes takes time. But for Sellamma, time is running out. She would like to go back to her house and land before her death.