Efforts to decriminalize consensual same-sex sexual activity in Sri Lanka, an island state off the southern coast of India, appear to be gaining steam as the country negotiates a preferential trade deal with the European Union (E.U.). Sri Lanka is one of 72 countries around the world that criminalize same-sex acts.

Signing this kind of trade agreement with the E.U. generally requires compliance with certain human rights conditions, such as removing laws that discriminate against LGBTQ people. However, Sri Lankan LGBTQ activists are concerned that the E.U. has waived this requirement following objections by the Sri Lankan government.

All Out published a petition from activist Rosanna Flamer-Caldera calling on the European Parliament, which is debating the issue, to insist that Sri Lanka scrap anti-LGBTQ laws before the trade deal is signed. Flamer-Caldera is the head of Sri Lanka’s pioneering LGBTQ rights organization, Equal Ground, which she founded in 2004. In 2016, she participated in HRC’s inaugural Global Innovative Advocacy Summit, which brought together 26 established and emerging advocates for the exchange of ideas and practices for advancing LGBTQ equality.

The petition, which was published on Monday, had collected 35,000 signatures. 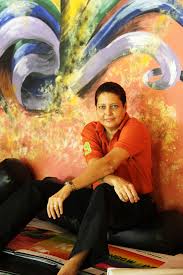 In an email to HRC Global, Flamer-Caldera stated, “LGBTQ rights have been systematically violated for 134 years in my country. The stance of the E.U. that the documented breaches of LGBTQ people’s human rights in Sri Lanka do not constitute a serious failure to observe international human rights standards is disturbing. Don’t our lives matter?  Don’t we have the right to live as full citizens of this country?”

There are three specific discriminatory laws against the LGBTQ community in Sri Lanka. Section 365 (against the order of nature) criminalizes same-sex activity by up to 10 years imprisonment, Section 365 A (gross indecency) can put people convicted of same-sex acts behind bars for two to 20 years, and Section 399 is used by police to harass transgender and gender non-conforming people on grounds of impersonation. While these laws are applied infrequently, they nevertheless undermine the fundamental human rights and dignity of LGBTQ Sri Lankans and give carte blanche to authorities to violate the rights of LGBTQ individuals with impunity.

(HRC is committed to advocating for the rights of LGBTQ people in Sri Lanka, elsewhere in South Asia and around the globe. HRC Global advocates for equality through advocacy, fellowships, partnerships and research. Read more about our work here.)