Excerpts from and interview with Attorney at law and executive director of Right Now Collective for Democracy Sudarshana Gunawaradena.

To me, the Sri Lankan identity is open to change. Some people refer to our history starting with Ravana. This epic says Ravana went to India and returned with Sita. Then came Rama. There is also a story about Vibhishana helping Rama. Later, Ravana was defeated. Sri Lanka was not destroyed but subjected to change, and Vibhishana reigned the country.

You talk about the arrival of King Vijaya, a prince from India. He encountered with the local culture. Finally, Vijaya reigned. We never called Vijaya and Vibhishana outsiders. We led the culture. Due to our geographical location, we were subjected to various forms of invasions. But we managed them. The most important example is Buddhism that arrived from India. When the ruling king decided to embrace it in line with ancient geopolitical conditions, we transformed ourselves according to Buddhism. At that time, nobody argued that we had a strong traditional cultural identity to be compromised with the advent of Buddhism. Another example is how the Anuradhapura kingdom withstood invasions for thousands of years. The ruling nobles in Anuradhapura adapted themselves when the invaders arrived. They did not leave room for invaders to destroy the civilization. But then came Kalinga Magha, a lunatic. Any other invader could be dealt with and managed.
It happened knowing that we were a small island nation vulnerable to invasions of geopolitical realities. Kalinga Magha came and destroyed key chieftains who were the guardians of our ancient irrigation system. Once they were ruined, there remained none to take care of irrigation activities. Then, the whole kingdom was rendered inoperable.

I think our identity is unique, but not in the sense most believe in. In my view, identity is very fluid. It is moving. It can apply to a person or a nation. The outer appearance can always be deceptive. It does not correspond with the inner substance. Likewise, there is uniqueness. My argument is that uniqueness remains with adaptability. Many people say it is unique and fixed. We have taken some aspects 2,500 years ago. If you examine, you can see the change. If you look at our clothing pattern, we know how it evolved. 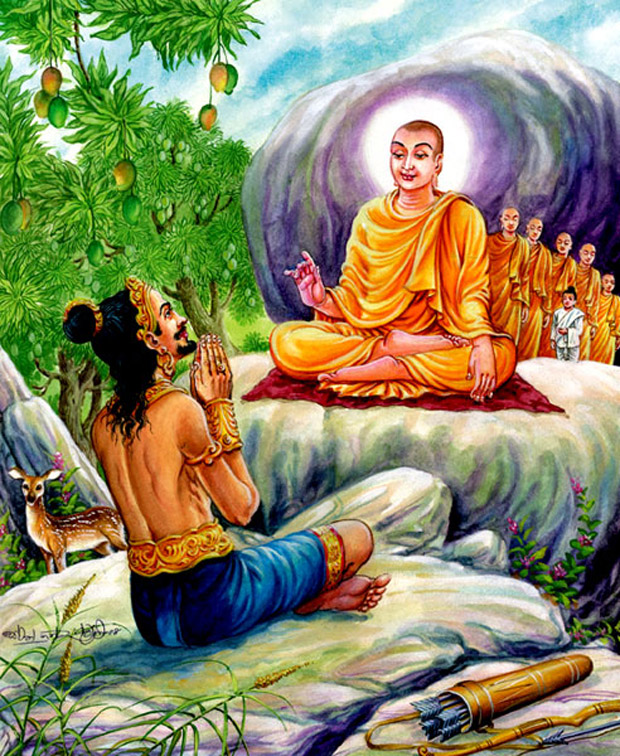 A painting of King Devanam Piyatissa become a Buddhist

“If we take our national attire for example, it has been introduced very late from outside. The sarong is Indian. We have the Kandyan Mul Anduma. Although we consider it ours, it was worn by the kings who arrived from India. What we wear is not Sinhalese in the original context. But, they have become Sinhalised. To me, there is uniqueness in identity. Yet, it lies with adaptability. Identity is formed by outsiders. Now, we quote Robert Knox. He said a farmer was even fit for royalty once the mud on his body was washed off. That was what Robert Knox said in a bigger context. We say the same. He said it in a different context, and we have taken it out of the original context.”

Multiculturalism is something you embrace as it is. A good example is Barrack Hussein Obama who became the US President. He represented the Democratic Party, one of the traditional parties, which agreed to give him nomination. He comes from a multicultural background. His father is an immigrant and the mother a US citizen. He has some Muslim connection too. Still, he managed to become the Head of State. He even managed to get re-elected for a second term. I do not think multiculturalism will harm traditions.

If the tradition is entrenched, we need not worry. I do not think multiculturalism can harm the uniqueness of our country. In a globalized society, we have to act positively. In globalization, English, as a language, is becoming prominent more and more. We cannot disregard it. We have to get it and refine it to suit our system. We have been doing it all the time. My point is that we need not fear it. We have to take positive steps. For example, we have to consider our language as an endangered element. We must specifically put some efforts to uplift its status. A lot of research has to be undertaken. The Sinhala Language Department has limited funds though we claim about it. We must spend money to develop it.

We believe that if the State becomes Sinhala-Buddhist, things will be alright. We became an Independent nation in 1948. There was a big issue about Bamunu Kulaya (Elitist Strata). In 1956, we were able to defeat it. After 60 years, what has happened? The State is not efficient enough to handle it. There are people conscious and committed to uplift our culture or language. The State should support them in terms of funding and other resources. Being a small country, it is very difficult to do certain things. Being an island, one cannot breach our physical boundaries. Yet, we cannot resist the invasion of technology. With just a phone call, we get connected with the outside world. It is difficult even for the US to stop such invasions. In the US, Mr. Trump was elected the President.

A majority 75 per cent of our population is Sinhalese and 70 per cent Sinhala-Buddhist. When the Sinhala-Buddhists stress themselves too much, the minorities living among them feel threatened. That will have an impact in the North and East where the country’s minority is the majority. They will start doing the same. That competition will damage the minorities living along with the Sinhalese in other parts. Ultimately, the Sinhalese and Muslims living in the North and the East will also enter the picture. Therefore, we have to come to a compromise. Human Rights are a right framework for that. We have to guarantee a system where everybody has equal protection. Then, the Sinhalese will also not have to feel intimidated as even in the North, the Tamils cannot get supremacy.

I am very positive on having a new constitution because the forces this time have a strong political support. First, the campaign by the then combined opposition for Constitutional reforms at the presidential election secured a mandate. It got the support of the wider cross section of society including Tamils, Muslims, upcountry Tamils and the majority Sinhalese. In the past, they were away from any Constitution-making process. This is a homegrown process. Parliament is deliberating. There is a greater chance. We will be able to come to a compromise.