HomeSituation AnalysisConstitutional Referendum: The possibility of a defeat in the context of a low turnout is very real. 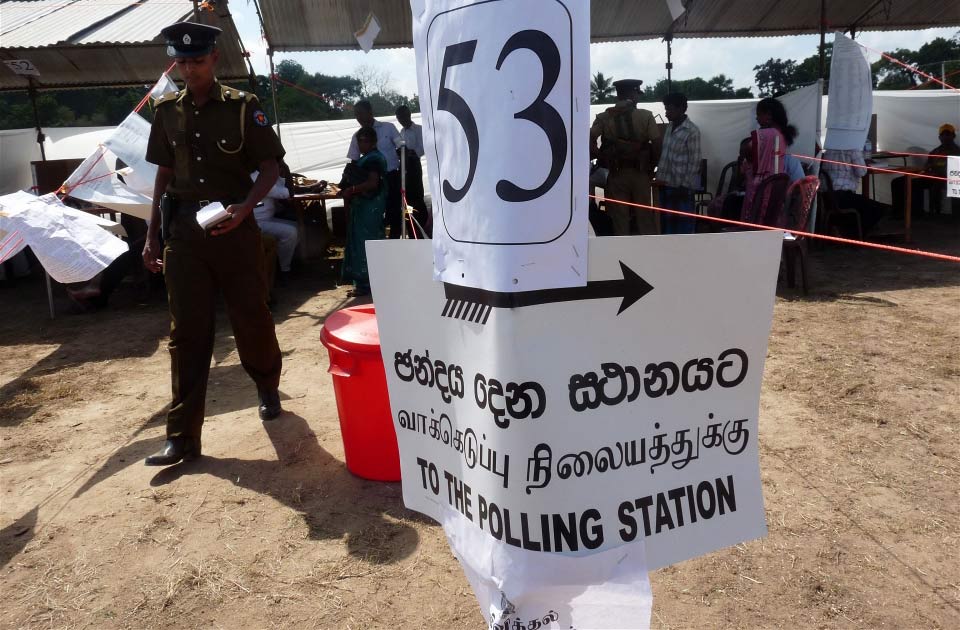 “Social implosion handed opportunities to those who spotted a basic weakness in the theory and practice of representative democracy.”

John Keane (The Life and Death of Democracy)

President Donald Trump’s senior counsellor Kellyanne Convey came up with a superb Orwellian term when she dubbed Presidential spokesman Sean Spencer’s outright lies about inauguration crowds as ‘alternative facts’. ‘Alternative facts’ are not just the propagandistic lies governments tell people; they are also the comforting lies governments and people tell themselves. Basing political calculations and political decisions on ‘alternative facts’ is often a suicidal exercise, as Mahinda Rajapaksa discovered when he held a presidential election two years ahead of time on the basis of astrological predictions, made-to-order opinion polls and sheer wishful thinking.

A more democratic constitution is one of the main promises of the then opposition during the 2015 presidential election. The doings of the Sirisena-Wickremesinghe government prove that politicians cannot be trusted to retain their fidelity to the values and principles they espoused in opposition once they assume power. Some politicians turn more repressive and more corrupt than others, but all shed at least a part of their democracy-justice-equality-honesty-transparency skins when they are in office. The only way to actually restrain power-wielders’ innate tendency towards abuse of power is to ensure that they are hemmed in with constitutional and legal limits, robust institutions and an informed and aware public.

This week, the wife of Zimbabwean President Robert Mugabe proclaimed that when her husband is dead, the ruling party would field his corpse at the presidential election.[i] The statement is grotesque, but it is a threat rather than a joke. When power is uncontrolled and can be exercised with impunity, nothing, however horrendous, is beyond the pale. That statement is an indication of the fate which may have befallen Sri Lanka had Mahinda Rajapaksa won the 2015 presidential election. It is also a warning of what can happen if the Rajapaksas succeed in regaining power.

‘Democratic deconsolidation’ is a term coined by Yascha Mounk, a Harvard lecturer and the cofounder of watchdog group After Trump, to explain the growing anti-democratic tendencies in the US and Western Europe. Mounk identifies three different but related vectors which seem to be strengthening illiberalism in developed democracies: economic anxiety, ethnic and racial anxiety and growing economic inequality.[ii] These vectors reinforce each other and create situations in which broad swathes of the public turn away from democracy and become willing to experiment with anti-democratic solutions.

Democratic deconsolidation is not a new phenomenon. It had happened in the past, the case of Adolf Hitler being the best case in point. The more recent examples include Brexit and the victory of Donald Trump, not to mention India’s electoral endorsement of Narendra Modi.

In January 2015, Sri Lanka took a clear step in the opposite direction, rejecting authoritarianism and opting for democracy. This choice was reinforced in the August of that year, when the electorate rejected the Rajapaksas for the second time, turning the much-vaunted Mahinda Sulanga from the anticipated gale to a draught.

History didn’t end there. If economic anxieties of the broad masses are not addressed, they will become easy prey to politics of fear.

Only an insignificant percentage of Lankans would vote for or against a new constitution based on its merits and the demerits. The deciding factors would be the stances taken by political parties, the passions which are incited and ordinary everyday problems faced by the people.

The referendum is winnable if the UNP, the SLFP and the Tamil and the Muslim parties campaign vigorously for a yes vote. Unfortunately many in the UNP and the SLFP are unlikely to regard the referendum as ‘their battle’; their attitude is likely to be one of indifference.

Since the constitution will have to be acceptable all communities, the necessary compromise might be unacceptable to large swathes of Sinhalese, Tamils and perhaps even Muslims. The possibility of some Tamil leaders advocating a boycott is very real. The boycott call might fall on receptive ears because the government has failed to deliver even that which is deliverable. The inability to fast-track the gang-rape/murder case of the young Tamil student Vidya (the incident happened almost two years ago), the uncertain fate of the Keppapulavu-displaced, the failure to come up with a Marshall Plan type programme to address the basic day to day problems of the war-affected areas are creating a sense of disenchantment among Tamil and Muslim people. This demoralisation and loss of faith might make many Tamils and Muslims indifferent to the outcome of a referendum.

A similar apathy is likely to grip parts of the South, again due to economic problems. Many Sinhalese who can be won over for a new constitution would be lost because of the government’s inability to acknowledge let alone resolve the economic misery of the masses.

The possibility of a defeat in the context of a low turnout is very real.

If the referendum is lost, not only will the new constitution be dead in the water; the government will fragment. The uneasy alliance between Maithripala Sirisena and Ranil Wickremesinghe is unlikely survive such a shock.

In the critical absence of a progressive opposition which seeks to unite the poor and the powerless across ethno-religious lines, the main beneficiary of a referendum-debacle will be the Rajapaksa-led Joint Opposition.

The Joint Opposition would conduct the No campaign on the basis of inciting ethno-religious hatred and phobia. In a time of economic security, such tactics are likely to fail. But in the current context of growing economic insecurity and receding economic optimism, their propaganda has a greater chance of success.

The battle for a new constitution is necessary. But it must be waged at a time and under conditions which renders victory possible. To think that a referendum can be won in the current context is to make deadly political calculations on the basis of alternative facts.

The line of utopia and dystopia is often a thin one. Often the search for utopia can lead a nation into the deadly wasteland of dystopia. It would be ironic if our desire for a more democratic constitution paves the way for a Rajapaksa return. 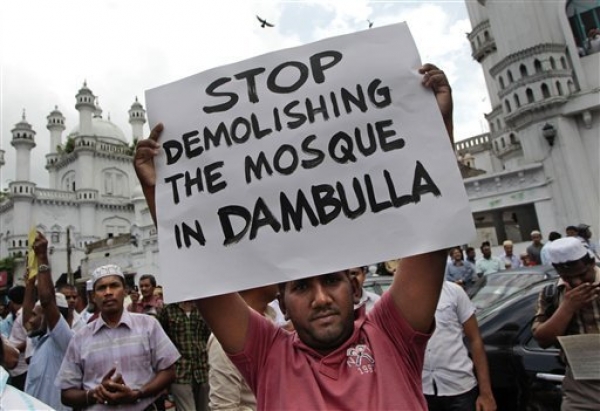 File photo:: Dambulla, one of the hot spots of extreme Buddhist activity

Sri Lankan celebrated another Independence Day this month. Behind the hype of unity, we remain a much divided nation, a collection of ethno-religious communities with little mutual understanding and even less mutual sympathy.

If a report in the blog of veteran journalist DBS Jeyaraj is accurate, Dambulla almost experienced an Aluthgama moment in the second week of February 2017[iii].

According to Mr, Jeyaraj, the inciting incident (which occurred on February 8th) was something totally trivial – a misunderstood food order, a far from political confusion between club-sandwiches and submarines. In this particular case, it so happened that the customer who placed the order was Sinhalese while the man who managed the restaurant was Muslim. When the customer’s husband came to complain about the mistake, an altercation ensued and he was assaulted by the manager of the restaurant and the staff. Instead of going to the police and lodging a complaint, the victim summoned a mob. The mob attacked the manager and held a demonstration in the Dambulla town. In fear, Muslim-owned shops closed their shutters. When they tried to reopen a day later, the still ascendant mob reportedly threatened them and forced their re-closure. Another Aluthgama was in the making.

Fortunately the danger passed, because when shop-owners contacted area politicians and relevant ministers (both Sinhala and Muslim) the response was instantaneous. Police were deployed and a further deterioration of the situation prevented. Both the Muslim manager and the Sinhala customer were arrested and remanded. According to Mr. Jeyaraj, the situation in Dambulla has returned to normal. The mosque committee has met with the two culprits and persuaded them to agree to an amicable solution.

The Dambulla incident is a reminder that Sri Lanka is not yet out of the woods. The very triviality of the original cause indicates how easily the crime of one citizen can be translated into a communal crime requiring some degree of collective punishment. In such an inflammable situation, the inciting incident need not be political or religious; anything would do, a confused food order, a word out of place, a glance interpreted as insulting…

The long Eelam war was preceded by several anti-Tamil riots. The first riots happened decades before the Tigers were formed, when Vellupillai Pirapaharan was just a boy. The violent outbreaks occurred in a psychological climate generated in part by myths about Tamils dominating the universities, the state sector and the private sector (The same lies are believed about Muslims and Christians too, and become dominant from time to time; currently the role of encroaching and dangerous minority is being assigned to the Muslims). If the government and Sinhala society adopted a zero-tolerance attitude towards the first riots, the subsequent riots could have been avoided, and the war either prevented or contained into a localised, sporadic insurgency.

The building of a Lankan identity and a Lankan nation is necessary to prevent this island from being ripped apart by ethnic and religious loyalties, again. But that necessary nation-building project proceeds at a snail’s pace. It is also vulnerable to long stalls and serious setbacks. Until that distant goal is reached, and in the absence of a sense of Lankanness, communal peace can be preserved only if the state and the government occupy a relatively neutral position between the contending ethno-religious communities. If the state and the government shift significantly from that neutral sphere, the political will to resist extremist machinations will be weakened or even lost.

The Sirisena-Wickremesinghe government has disappointed and failed in many areas. It indulges in corruption and nepotism; it is indifferent to the economic suffering of the people, unconcerned about environment degradation and displays an alarming willingness to turn Sri Lanka into a de facto Chinese colony in return for sufficient largesse. But as regards the task of maintaining ethno-religious peace, the government’s commitment remains strong. The difference between 2013 and 2017 is that in 2017 there’s no government-mandated enabling environment in which majoritarian-racists can conjure a bloody conflagration out of trivial human problems. The Sirisena-Wickremesinghe administration has not adopted politics of fear as a way of maintaining power, so far. Individual ministers do flirt with racism, but the government as an entity has not indulged in that particular crime, yet.

In 2013, the BBS intervened to turn a normal altercation between a Sinhala three-wheeler driver and some young Muslim men into a religious problem. As the BBS held a public meeting to inflame Sinhala-Buddhist passions, the Rajapaksa regime nodded, winked and looked away. The police and the military were deployed to provide protection not to the victims but to the mobs, which pillaged and burned Muslim homes and businesses with impunity.

In 2017, the Sirisena-Wickremesinghe administration seemed to have acted with commendable firmness and promptitude when a similar outbreak threatened Dambulla.

Unfortunately, though the government doesn’t resort to racism as a matter of policy, it’s failures in other areas, particularly economics, can empower those whose political bread-and-butter is racism, who plan to use communalist fires to clear the road to power.