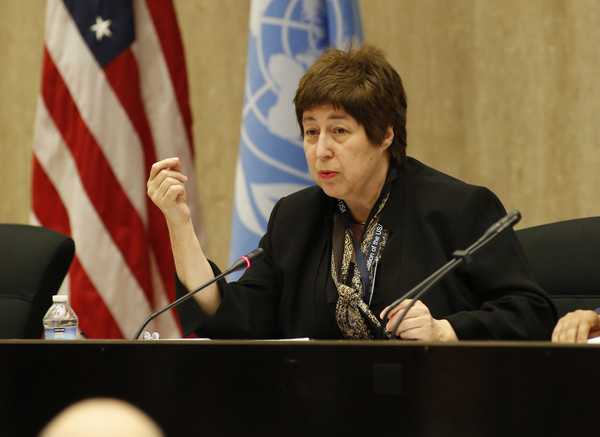 Image: Felice D. Gaer, one of the two committee experts who led the examination of Sri Lanka.

On Wednesday, a United Nations committee questioned the government’s commitment to fulfilling those promises, pointing to the continued use of torture by the police and a failure to rapidly investigate and prosecute atrocities committed by security forces and Tamil Tiger rebels at the end of the country’s 26-year civil war in 2009.

In delivering its conclusions from hearings conducted over two days in Geneva at the end of November, the United Nations body, the Committee Against Torture, said it was deeply concerned by evidence that torture was “a common practice” routinely inflicted by the police Criminal Investigation Department “in a large majority of cases,” regardless of the suspected offense.

“What we saw was that the government has not embarked on institutional reform of the security sector,” Felice D. Gaer, one of two committee experts who led the examination of Sri Lanka, told reporters in Geneva.

“There’s some question about their commitment to a lot of things that are needed and have been promised in that country in this very difficult time,” she added.

A United Nations panel estimated that up to 40,000 ethnic Tamil civilians may have died in military operations that ended the civil war, and investigators subsequently detailed horrific accounts of extrajudicial killings, torture, sexual violence and enforced disappearances.

After his upset victory over President Mahinda Rajapaksa, Mr. Sirisena said he would set up a truth, justice and reconciliation commission; create an office to investigate the fate of tens of thousands of missing persons; prohibit torture and create a judicial mechanism to ensure accountability for past atrocities.

But Mr. Sirisena said last month he had written to President-elect Donald J. Trump asking for help to free Sri Lanka from those obligations and planned to make the same request to the next secretary general of the United Nations, António Guterres of Portugal.

“If it’s true, it completes the reversion which was already underway,” Alan Keenan, a Sri Lanka specialist for the International Crisis Group, said of Mr. Sirisena’s claim to have contacted Mr. Trump. “There was always a doubt about the commitment of the president and prime minister. As time goes on, those doubts have grown.”

The Committee Against Torture acknowledged measures taken by Mr. Sirisena to counter past atrocities by, for example, setting up an Office of Missing Persons and adopting a national plan to promote human rights. But the committee said the government had made no progress on longstanding investigations into extrajudicial killings and expressed concern at its failure to set up promised mechanisms to prosecute crimes.

A wide range of continuing abuses were also noted by the committee, which cited a revival of so-called white van abductions, named after the vehicles used in the kidnappings of suspects who disappeared into unregistered places of detention. In addition, the committee criticized the continued use of administrative detention under draconian antiterrorism legislation and the lack of credible witness protection.

Those concerns were underscored, Ms. Gaer said, by the alarming presence of Sri Lanka’s national intelligence chief, Sisira Mendis, in the delegation sent to meet the committee. Mr. Mendis had served as deputy inspector general of the Criminal Investigations Department for a period of 15 months up to June 2009.

“He was the person with command responsibility over the most notorious center for abuse in the country just at the end of the civil war, at a time when so many of the horrendous things happened,” Ms. Gaer said.

The committee had asked him many questions, Ms. Gaer added, but “Mr. Mendis did not say a word the whole time he was there.”
NYT