Gunasekera said: “I shouted that I was from the media when they held me. Then the person who attacked me said: ‘That is why we hit you.’ I identified the attacker as the incumbent Navy Commander.”

Gunasekera said: “I work as the Suriyawewa correspondent of The Island and Divaina and the TV correspondent of the Hiru. I went to the Magampura Port to report the Satyagraha by the port employees. While I was reporting the event, a naval officer in civvies came to me and asked what I was doing there. I told him I was from media and showed him my media accreditation card. Then he grabbed me by my neck and dragged me to a place where there was another group. The Navy Commander in a T-shirt and shorts came there and I told him, too, that I was from media. He abused me in filthy language and assaulted me. Port workers shouted that I was a journalist and not to attack me. The navy men tried to grab my camera and I ran away. Later, I took treatment from a private medical institute in Suriyawewa. I intend to lodge a complaint at Hambantota ASP office for my protection for now. I fear for my life.”

Gunasekera has lodged a complaint with the police.

The government has said an investigation is underway into the attack on the journalist.

The Sri Lanka Photojournalists’ Association has condemned the Navy commander’s assault on The Island journalist. Association’s secretary Romesh Dhanushka Silva has said in a media statement: “We vehemently condemn the brutal attack by navy commander on a journalist. The Navy commander attacked the journalist while the latter was showing his media accreditation. This is a serious situation. The Navy Commander’s action is a huge slur on hitherto impeccable record of the Sri Lanka Navy. According to the Constitution every citizen is equal before the law. It should be the same with the navy commander, too. We demand justice from the government and call upon it to take immediate action against the Navy commander for assaulting, hindering and obstructing the journalist carrying out his duties.” 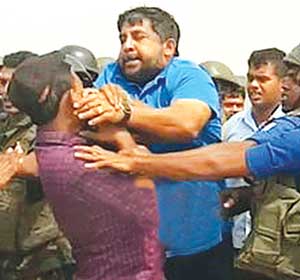 Workers Struggle Centre has, in a media release, condemned the high-handed action of the navy in suppressing the trade union action. It said: “Media organisations have published photos and videos of armed navy men attacking unarmed protesters. Navy commander himself attacked journalists. We condemn this assault and demand justice from the government.”

The release signed by Organisational Secretary of the WSC Duminda Nagamuwa said: “This government came to power, promising to ensure democracy. We know how the previous government crushed public protests at Chilaw, Rathupaswala and Katunayake. This government, too, has done the same. It, too, has resorted using military power against the people.”

The JVP has pledged fullest support for the Satyagraha launched by Hambantota port workers against government’s moves to hand over 15,000 acres in the area on a 198 year lease to a Chinese company. JVP Trade Union Wing leader K.D. Lalkantha Friday visited Hambantota and addressing a rally held at Bellagaswewa junction in support of the agitation pledged his party’s support to the protestors.

Meanwhile, a press release issued by the Department of Government Information under the title ‘Alleged assault on a journalist at Hambantota Port’ said: “The government has initiated an inquiry into the alleged assault on a journalist during the protest incident at Hambantota Port Saturday (10). However, according to preliminary inquiries, the concerned journalist violated basic ethical practices when covering sensitive conflict situations. It is highly expected that the journalists adhere to the highest standards of ethical practices when covering these types of conflict situations. Meanwhile, the Navy says that the physical presence of its commander at the scene was mandatory as per the requirements of the International Ship and Port Facility Security (ISPS) Code.