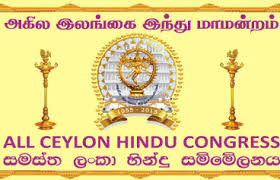 Issuing a a special statement All Ceylon Hindu Congress (ACHC) says that it considers it as an act of sin to insult the Chief Minister as a racist.

The full text of the statement followed:

“Citing the speech made by. Justice C.V. Wigneswaran at ‘Rise Thamil’ meeting on Sept 24, a few politicians and religious Leaders have been making statements through the Media on the basis of communal hatred. All Ceylon Hindu Congress expresses its strong condemnation of and regret on those statements.

His Excellency the President has been repeatedly recalling in his speeches, the considerable support given by Thamil speaking people to enable a government of good governance (Yahapalanaya). Having chosen to forget or ignore that, a few extreme communal minded politicians and religious leaders are taking forward communal hatred propaganda through the media. This must be halted forthwith.

However, one of the important Cabinet Ministers Vajira Abeywardena, Minister of Home Affairs, has looked Chief Minister’s speech in the correct perspective and presented the truthful position through newspapers stating that Northern Province Chief Minister has echoed the views of the people of his Province.

One columnist in an English newspaper has rightly pointed out, that the pretesting people had read only the front-page headlines in the media and had not bothered to read the entire text of the Chief Minister’s speech.

The Chief Minister has clearly declared that he is not aching against Sinhalese or Buddhist or any other race or religion.

In these circumstances, we consider it as an act of sin to insult the Chief Minister as a racist. We believe that efforts are being made to prepare a constitution with a view to create a reconciliation and mutual trust among and to grant equal rights to all races. The majority of the people should not think that a constitution should be thrust by them on the minorities. That is not the real democracy.

Racists should please cease to make efforts to deprive the Tamil speaking people of seeing the dawn of an era to satisfy their aspirations.

When His Excellency the The President, the Prime Minister and the Leader of the Opposition say that there will be a political solution by way of devolution of power, certain racist elements are carrying out misleading propaganda to incite communalism. We vehemently criticize this attitude and appeal to them to desist from doing that.

We regret to hear that an organization which claims to be propagating the ideas preached by the Buddha, has been scouting that all the Tamil should be sent to India.

All Ceylon Hindu Congress is a non-political institution. However, taking into consideration the apprehensions expressed by minorities (in particular the Tamil speaking people, most of whom are Hindus) we are making this appeal.

While appealing that no one should create any hindrances to the present opportunity of creating an atmosphere of equal rights and peaceful co-existence to all the people of this country we urge all the Political Leaders and the Religions Leaders co-operate to make and implement a constitution in that direction and to guide all the people in that correct path.