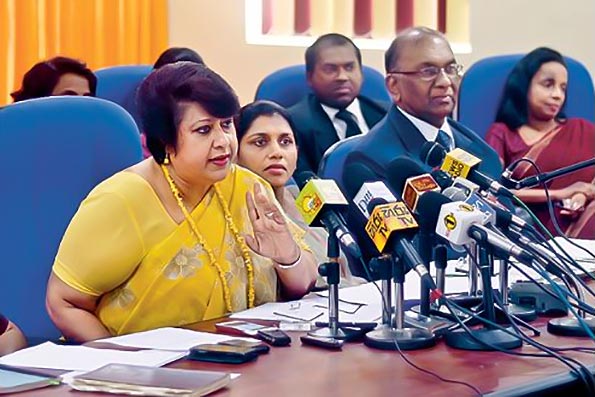 ( Dilrukshi Dias Wickramasinghe at a press conference )
Last week, on October 12, President Maithripala Sirisena lashed out at independent commissions, in a speech that drew condemnation from many quarters.This week, the Director General of the Commission to Investigate Allegations of Bribery and Corruption (CIABOC) Dilrukshi Dias Wickramasinghe has tendered her resignation.

Although she did not give a reason for her resignation, it appeared that the move was a reaction to Sirisena’s comments.

“There was an objective in setting up these independent commissions. Members of these commissions should know their limits. They must know the scope of their work,” he said while threatening to take “decisive action against those conspiring in corners.”

“In all these commissions, the secretaries and director-generals have been appointed by me. They have a duty to keep the chief executive (President) informed.”

News of her resignation was met with almost widespread condemnation, given that Sirisena was elected on a platform of good governance and transparency.

Executive Director of Transparency International, Sri Lanka, Asoka Obeyesekere speaking to Groundviews said three questions needed to be answered. The first, was whether the President needed to be informed of the investigations of independent commissions – as his comments suggested that he did.

“In light of the secrecy provisions of such investigations, the idea of the President being informed, or giving an informed opinion to base his criticism on is questionable.” Obeyesekere added that he had made an attempt to establish his standing for making such comments on the arrests of military personnel, for instance, as a former Defense Minister. “By that logic, the Health Minister would argue he had standing to interfere in any case involving a doctor, the Education Minister could argue standing in a case involving a teacher, and so on. So the premise that the President needs to be informed is fundamentally flawed” Obeyesekere said.

Commenting on the President’s threat to take action, he said “The only action he could take is to de facto set in motion the removal of a Commissioner. This could be construed as a veiled threat at best. If he doesn’t end up taking action, it is implicit that he can’t substantiate the claims he has made.”

He further added that the President himself has recently faced allegations in a bribery scandal.

The Sydney Morning Herald reported company emails which showed Sirisena and his adviser demanding a political donation to be paid by the iconic Snowy Mountains Engineering Company (SMEC) when Sirisena was a Cabinet Minister.

The President has instructed the Attorney General to investigate these allegations. However, in light of the current interference, it would be difficult to expect objectivity in such investigation, Obeyesekere said.

The only way in which integrity would be maintained, is if the Director General’s resignation was rejected, he added. “In these situations, there is a tendency to assume that everything is bad. Yet, there are opportunities that can stem from the fact that when there is friction, independent commissions can consolidate and strengthen themselves”.

The only way for CIABOC to retain its integrity is for Wickramasinghe’s resignation to be rejected, and for the Commission to make a strong statement against any future political interference. This would however be a tacit acceptance that the allegations made by President Sirisena cannot be substantiated, Obeyesekere said.

Writer and columnist Nalaka Gunawardene said that the resignation was yet another indication that the promise of yahapaalanaya was going seriously awry. Speaking further, Gunawardene said it seemed the DG had “little choice” but to step down after the completely unwarranted remarks Sirisena made last week.

“With such public outbursts, President Sirisena is not only betraying everyone who voted for him, but worse, he is discrediting the very idea of a society where rule of law prevails, and every official is held accountable. All I can say, in dismay, is: Et tu, Maithri?” Gunawardene said.

Executive Director of the National Peace Council, Jehan Perera said the resignation came as a “shock.”

“The investigation of those who held high positions in the former and present government is bound to be controversial.  Choices have to be made in terms of which case to take up first and which to take up later.  We may prefer some cases to be taken up before others. The choices made can be seen by those who are at the receiving end to be politically motivated.  Anyone in the position of investigator would come under criticism for taking up one case rather than another.  This is a difficult job,” Perera said commenting on Sirisena’s comments that some of the probes were “politically motivated.”

“Wickramasinghe was doing a difficult job better than anyone in recent history who has held that post. I hope her resignation is not accepted and she continues in her post.  I am hopeful that the political authorities will withdraw from their retrograde stands.  I think that the independence of the Commissions appointed under the 19th Amendment will become stronger as a result of the public attention that has been drawn to this matter,” Perera said.

Political analyst from Verite Research, Janeen Fernando said the impact of the resignation was particularly harmful for developing anti corruption institutions that are not just effective and independent, but also perceived as such by the public. “The Bribery Commission, unlike other special bodies such as the Financial Crimes Investigation Division (FCID) and the Presidential Commission of Inquiry to Investigate and Inquire into Serious Acts of Fraud, Corruption and Abuse of Power, State Resources and Privileges (PRECIFAC), is the only key permanent anti-corruption institution. If the Government fails to support the commission in becoming effective and independent, it is unlikely that the country will see a break in established patterns of corruption and public confidence in the government’s ability to deliver on the mandate of good governance will also suffer,” Fernando said.

As the news spread, political factions began to weigh in. A carefully worded statement purporting to be from Speaker Karu Jayasuriya‘s office said there would be “no room” given by the Speaker or Prime Minister for political interference into the work of independent commissions. Responding to reports that Sirisena’s statements highlighted a split within the Government, the statement added that there was no such division of thinking between the President or Prime Minister.  JHU National Organiser Nishantha Sri Warnasinghe for instance, charged that Wickremasinghe had resigned to avoid the fallout from investigating the Central Bank bond scam, particularly as explosive documents leaked last week (which the Central Bank conceded were accurate) pointed to members of the Monetary Board and senior officials of Public Debt at the Central Bank. SLFP’s Dilan Perera meanwhile said it looked like “the hat fit” although the President didn’t specifically single out the Director General in his speech.

Former secretary to the Ministry of Mass Media, Charitha Herath said he felt the Director General of CIABOC’s resignation was incomprehensible and said there should have been consultation with the President before making such a move. “Of course an officer can’t make a reply to a public meeting, but political leaders should be dealt with in a consultative manner,” Herath said. He further said the President had the people’s mandate, and so should have been consulted. “Those governing represent the people, and have their mandate. Now, civil society organizations are criticizing and think they are equal to the elected leaders” Herath said.

Herath’s comments echo what many of the political parties said in the wake of Wickremasinghe’s resignation – but many do not feel the same way.

Groundviews has compiled some of the immediate reactions and coverage on Twitter, using Bundlr, which can be viewed here, or below:

The reactions range from applauding her courage to expressing increased disillusionment with the Sirisena-Wickremesinghe government.

Initial news reports noted that the President’s Secretary P B Abeykoon had accepted the Director General’s resignation but uncertainty continues to prevail, as the President returned from the BRICS summit in India last evening. It has been reported that his final decision will be made today (October 18).

It is ironic, however, that it was President Sirisena who enacted the legislation allowing for the function of independent commissions such as the Commission to Investigate Allegations of Bribery and Corruption, the Police Commission, and others, through the Nineteenth Amendment to the Constitution. While he pointed out during his fiery speech that he did in fact appoint many of the heads of the Independent Commissions, it is pertinent to note that nowhere in the amendment is it specified that he should be consulted in any way in their operations. His comments with regards to this, therefore are not just surprising but also worrying.