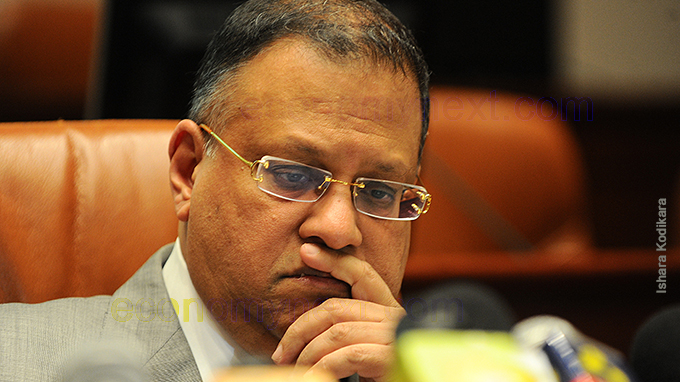 ( Arjun Mahendran: UNP plan is to save the real culprit and file a bogus case!)

Anti-Corruption Front (ACF) calls for an independent presidential commission to investigate the two controversial treasury bond scams following reports that there is a possibility of two separate reports by the Committee on Public Enterprises (COPE).

AS there is an information on two separate reports (or two separate recommendations in a same report) is true, this will be an unprecedented event in Sri Lankan history. The public, for the most part, has always seen COPE as an ‘institution’ that can be relied upon to properly investigate instances of corruption in government institutions. If the members of the COPE divide along party lines and present different reports or if some members go against the general consensus and attempt to justify former Central Bank Governor Arjuna Mahendran, this is a serious concern because the treasury bond scam is not only an abstract ‘financial crime.’ The Treasury Bond scam and its fallout directly affects six million EPF beneficiaries and thus directly affects Sri Lanka’s social security net.

Since the Auditor General is appointed by the Constitutional council, based on his ability to carry out such audits and his professionalism and independence, Auditor General’s report has never been questioned by COPE members.

However on 24 October (Monday) United National Party (UNP) members of the COPE questioned the Auditor General based on a party stance, making it obvious that the government is carrying out a systematic campaign to cover up the biggest financial irregularity which occurred under the current administration.

“This is not what the people want or expected. I think it’s universally accepted, apart from a few UNPers, that there had been irregularities at the Treasury bond auctions in 2015 and 2016. People also know that former central bank governor, Arjuna Mahendran and the monetary board are responsible for what transpired. If the current COPE is divided along party lines and fails to do its job, I think we have to place our hopes on a presidential inquiry,” said Advisor for Anti-Corruption Front, Rajith Keerthi Tennakoon.

In the 2015 interim COPE report, which was never debated in Parliament because of the sudden dissolution, there are mentions of how the EPF, which has the ability to purchase bonds as a primary dealer, having purchased the bonds from other primary dealers has sustained significant losses. The leaked Central Bank investigation report on the bond issue also mentions the highly suspicious nature of this transaction and has stated that this has had an adverse effect on the EPF, and ultimately millions of hard working members of the private sector. However the impact on the EPF has not been properly calculated or considered by any investigative entity but many financial experts fear that that the long term losses will be colossal. These are allegations that have been leveled publicly and widely reported by the media and as relevant individuals have not denied these allegations we have to presume that media has reported this correctly.

ACF has always fought for the economic and social rights of Sri Lankans and given that the Treasury bond scam will have a serious impact on the social security net of millions of Sri Lankans, we urge the President and the government to resolve this matter in a satisfactory manner.

After considering all these facts the ACF once again requests the President to establish a fully powered presidential commission to investigate the bond issue.