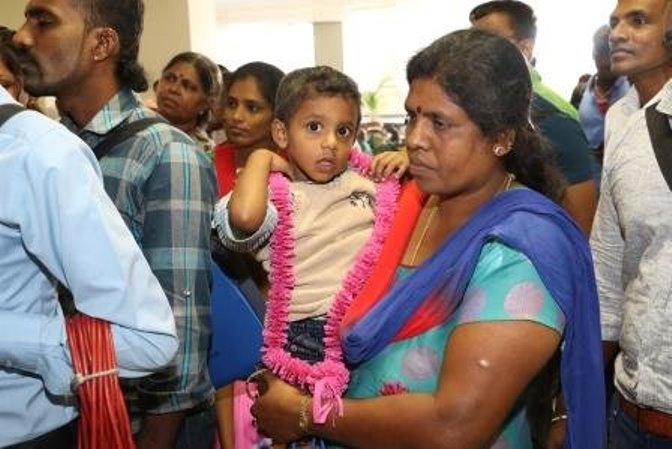 ( Refugees returning  from India at the Air Port)

A new National policy on war displaced, which was approved by the cabinet last week, will ensure the rights of internally displaced persons is protected and all their issues are addressed.

The full cabinet paper submitted by the Minister of Prison Reforms, Rehabilitation, Resettlement and Hindu Religious Affairs D.M. Swaminathan and seen by The Sunday Leader, goes into detail on all the issues concerning war displaced which needs to be addressed.

The policy paper notes that the provision of durable solutions to displacement, whether this is return to places of origin, local integration, or relocation in other areas of the country, is central to addressing the rights of IDPs and displacement-affected populations.

The provision of durable solutions is also inextricably linked with the wider political task of healing the wounds of war and forging a strong sense of unity within a diverse polity.

The policy takes a conflict-sensitive approach, paying due regard to the perspectives of the various groups of displaced communities, as well as communities hosting IDPs, to ensure that assistance is designed and implemented in a manner that resolves rather than exacerbates tensions, strengthens peace and promotes justice, unity and reconciliation.

Minister Swaminathan notes in the policy paper that the rights of IDPs must be respected, protected and fulfilled while they remain in displacement, and at all stages of their search for durable solutions. More than six years after the war, it is time for urgent and comprehensive solutions that leave noone behind.

The new government has since 2015 made its intention clear that the displacement relating to the war needs to be urgently addressed and durable solutions found for IDPs, returning refugees and those who have chosen settlement options but are still struggling to find durable solutions.

The development of the National policy has been based on wide-ranging consultations with key stakeholders, both in the war-affected areas and the centre, consultations that began in June 2015 and culminated with a presentation to, and endorsement by, the National Steering Committee (NSC) on resettlement in Colombo on 21 March 2016.

The draft also drew upon earlier efforts to address the displacement issue including the 2011 Lessons Learnt and Reconciliation Commission (LLRC) report which recognised the importance of finding durable solutions for IDPs in the medium and long term and noted that, absent this, “a sustainable and all-inclusive reconciliation process cannot be achieved.” It incorporated the findings of the September 2008 National Consultation on the Status of Internally Displaced Persons (due to conflict) within the framework for Durable Solutions; the Draft bill on Protection of IDPs (2008 August, Human Rights Commission of Sri Lanka) and the MoR’s Draft Resettlement Policy (2013).While the government has taken measures, including drawing up this policy, with a view to rapidly ending the war-related displacement, this policy notes that for specific populations the struggle to achieve durable solutions, particularly in securing adequate shelter, employment, safety, security, and equal access to essential services, may take longer and will require targeted assistance.

Land to be returned

One of the major obstacles noted in the police to address the IDP issue is the land issue, particularly the occupation of civilian land by the military.

The cabinet approved National policy notes that Ministry of Defence in coordination with the Ministry of Law and Order must ensure that an accurate mapping is made of all land that is or was owned, claimed or used by civilians and is currently occupied by any of the three security forces – army, navy or air force – or by the police.

All such lands, particularly private land, should be released and returned to civilian use and ownership urgently, unless the State determines that it is required for public purpose.

The policy paper also notes that the purpose, be it national security or development, should be carefully scrutinised, including to ascertain that no alterative land can be found for the stated purpose. This also means, inter alia, releasing land that is being used by the military for purposes not related to security including but not limited to agricultural production, tourist enterprises, or recreation. It must be ensured that land that is released is made safe from unexploded ordnance or other sources of danger, and returned in a state that can be used by former residents and owners for their residential or economic pursuits.

The National policy also notes that there are a number of cases where government departments and authorities, including but not limited to the Forest Department, Wildlife Department, Archaeology Department, Mahaweli Authority, and Urban Development Authority, have demarcated lands for state usage that were formerly owned and occupied by persons now in displacement, sometimes without consulting district and provincial level authorities or adequately informing those affected.

“It is imperative that the relevant Ministries take steps to address this practice and to take corrective measures to ensure that the land and property rights of those being prevented from returning to their land and/or property are recognised,” the policy paper notes.

It says where government departments or authorities have gazetted or otherwise laid claim to land belonging to displaced persons, these cases need to be reviewed in consultation with district-level authorities in a transparent manner, and where possible the land must be restored to the rightful owner.

The National policy also states that in exceptional cases if IDP land and property is required for public purposes, then this land will be acquired as per the existing laws. Those affected must be accorded their full rights in accordance with Sri Lankan law and national standards, including the NIRP. The owners/former occupants of that land and property must receive acceptable alternative land, and/or appropriate compensation for their lost land/property.

For persons who have to relocate, needs such as shelter and livelihood should be met, access to essential services should be provided and social integration issues should be addressed.

The government has also been told to take policy decisions and actions to address key problems faced by refugees who are attempting to return. This includes, inter alia, outreach and information campaigns to refugee communities abroad, facilitating the provision of key identification documents, assisting refugees to transport goods and personal possessions acquired in exile, ensuring that refugee returnees will be eligible to receive the same types of assistance that are available to IDP returnees, ensuring that educational and professional qualifications earned abroad are recognised where applicable including for school admission requirements, and that security screening programmes are conducted without undue delays.

Targeted assistance programmes, including for livelihoods and for social integration, need to be developed.

Refugee returns are likely to continue over a period of several years and will extend beyond the period targeted for ending internal displacement. While the Ministry of Resettlement will play an active role in this task, including in ensuring more effective monitoring of refugee returnees at the district level, Swaminathan says it will require the assistance of other ministries including Education, Health and Social Services amongst others.

The policy recognises that displaced persons, returning refugees and displacement affect communities are not just recipients of assistance but also key partners in governance, development and peace, and play a vital role in finding and implementing durable solutions for themselves.

The policy also recognises community-based organisations (CBOs), non-governmental organisations (NGOs), citizens’ committees, other civil society actors and humanitarian agencies, and relevant private sector actors – both national and international – as partners in dealing with the issue of displacement and durable solutions.

In order to take the proposed National policy forward, it has been proposed that In the Northern and Eastern Provinces, the Provincial Governor and the Chief Minister convene and co-chair regular Provincial Steering Committee meetings, which bring together members of the Provincial Council and relevant officials at the district and divisional level.

These committees will be established to ensure that assistance and development needs and the protection of IDPs, refugee returnees and displacement-affected individuals and communities are provided for and integrated into national and provincial economic plans, housing and infrastructure programmes, livelihood projects, and other areas of durable solutions support falling within their responsibility.

In every district where there are IDPs or refugee returnees, a Grievance Panel will be established to hear, decide and act on complaints filed by IDPs or refugee returnees and other persons of concern under this policy. These Panels will include District Secretaries or their representatives, district-level Social Service officers, district level officials from the Human Rights Commission of Sri Lanka (HRCSL), representatives from civil society and retired public officials among others.

Tags: Accountability, Human Rights, IDPs, Sri Lanka
Previous post It Would Have Been Better If The OMP Was Given More Power - Brito Fernando
Next article We, TNA, Are Very Worried About This Development -TNA MP D. Sidharthan