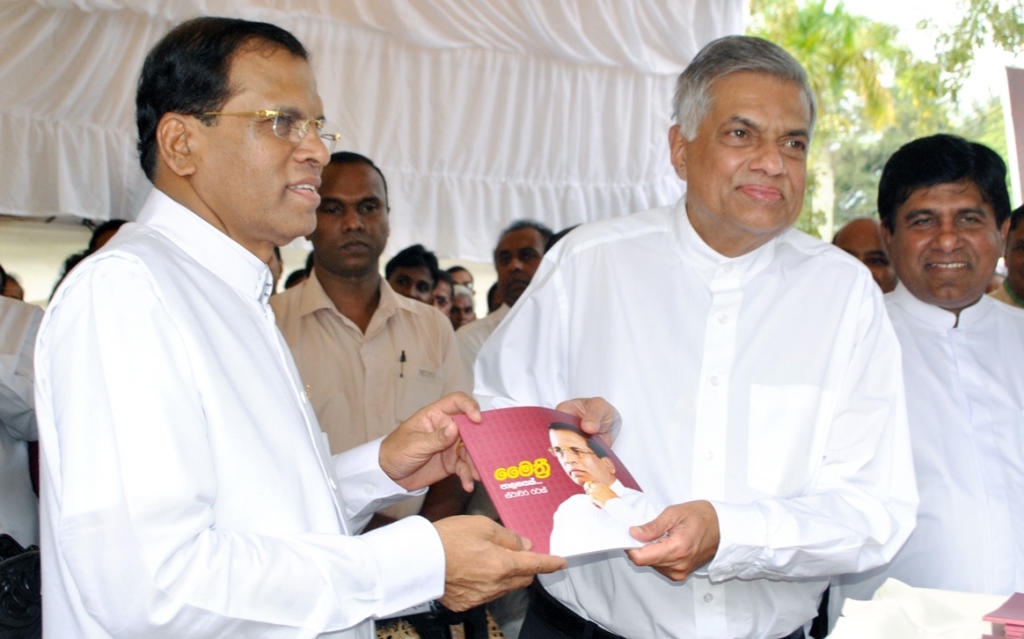 Health and Indigenous Medicine Minister Rajitha Senaratne says that the government is not perturbed by the much- hyped protest march of the Joint Opposition(JO) which is trying to score brownie points over the VAT issue.

He said the fanfare of the JO is short-lived because the government has decided to continue their cohabitation till 2020 and a new, stronger Memorandum of Understanding will be agreed upon shortly, to deliver on the people’s mandate of January 8, 2015.

“The JO planned for a two-year truce. They can never co-exist for five years,” the Minister said in an interview with the Sunday Observer last week.

Q: Going by the number of press conferences held by the parties in the ruling coalition, it seems the government is troubled by the Paada Yathra organized by former President Mahinda Rajapaksa through the JO. Your comments ?

A: The main purpose of the Paada Yathra is to topple this government as early as possible before the on-going investigations against them are completed and cases filed in Court. They are being accused of murders and large scale fraud, involving billions of rupees and millions of dollars. They know that the investigations will be finalized soon. 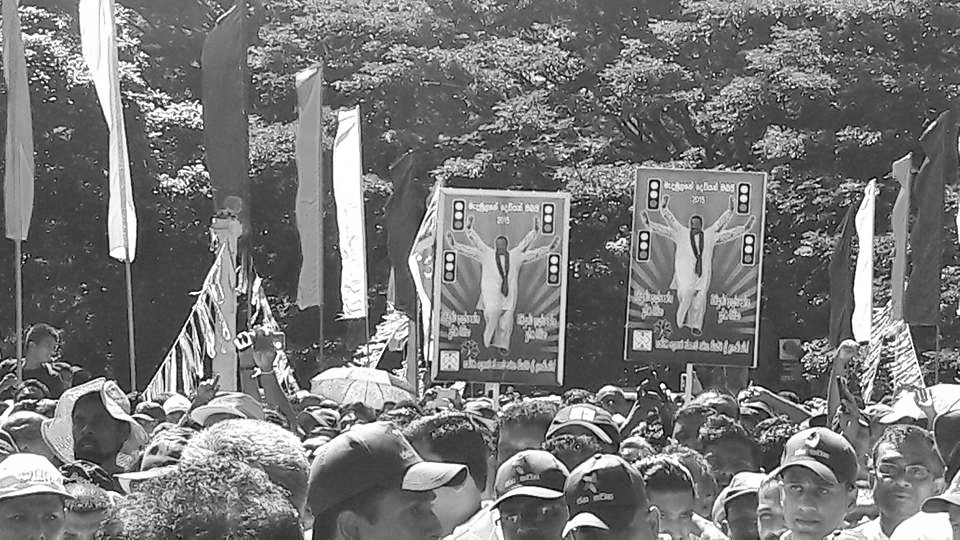 Therefore this is one of the attempts to show their strength. I have taken part in paada yathra with Mahinda Rajapaksa and Ranil Wickremesinghe as well as with Anura Bandaranaike.

I have led almost all those paada yathras. About one million people came to Colombo for the last Paada Yathra organised by Prime Minister Ranil Wickremesinghe before he became PM but he was defeated at the next election because these protest marches are attended by only party supporters. These events do not depict the people’s strength.

Q: The JO claims the arrest of Basil Rajapaksa was directed towards scuttling the protest march as he is the main force behind it?

A: He had committed those frauds some years back. Investigations into these cases began a few months ago. One by one, the investigations are being completed. How will the government know that he will organise a protest march against the government, when one of the cases against him will be fixed for trial.This is not the first time he was produced before courts. This, I think, is the fourth time.

Q: Do you consider former Minister Basil Rajapaksa as a formidable political force against the government?

A: No one is a threat to this government. The government is getting stronger. The General Secretaries of the two main parties in a joint press conference this week announced that the UNP and SLFP alliance will continue till 2020.

The JO was planning for a two-year truce. They can never co-exist, or last for five years. If this government carries on for five years, definitely the JO will collapse and it will happen in the coming months.

Q: The SLFP-UNP MoU will expire in August. Will there be a new MoU to facilitate this new arrangement?

A: We will extend the MoU up to two years and we will have a stronger MoU after the two years (January 2017). The discussions on the new MoU will start in the near future.

Q: Minister Dilan Perera says it is fine if the protest march is against the UNP, but if it is directed towards the SLFP or the President then there is an issue. Is this a sentiment shared by other UPFA members too?

A: Such statements affect the unity of the government. People have given a mandate for us to work together, they don’t expect you to talk about party interests. They are concerned about the joint actions to ease the burden of the people, nothing else.

This is the reason why I always oppose forming only SLFP or UNP governments. Already, we have formed a national government. That was the will of the people. We have to carry on. None of us must do or say anything to sabotage that.

Q: Is there a voice within the SLFP that the President should contest for a second term?

A: We have agreed that we should abolish the Executive Presidency That was the political demand of the SLFP and the Left. All those who opposed J.R.Jayewardene and the UNP, have promised at every election that they will abolish the executive presidential system. The second promise is to change the present electoral system.

Q: But it never happened ?

A: Yes. For the first time, though, there is a President who will do as he says. He made a vow for the second time at Ven. Sobhitha Thera’s funeral that he will abolish the Executive Presidency. He could not do it during the 100 days. That will happen before 2020. There will be no more Presidential elections thereafter.

Q: Is there a call from the party for President Maithripala Sirisena to remain as the leader of the next government?

A: The people must decide that. He is a leader who will act on the wishes of the people.

Q: What about the thinking of the SLFP and his supporters within the Government?

A: SLFP MPs are used to working with President Maithripala Sirisena. It is the same with the UNP. This culture of cohabitation under President Sirisena and prime Minister Ranil Wickremesinghe will improve day by day. When you have a national government for five years in the country, it will become a popular culture.

Q: Due to the manner in which the Central Bank issue was settled by the President, rumours were spread that the government was crumbling and the President and Prime Minister were at each other?

A: The UNP and the SLFP were at loggerheads from the 1950s up to 2015. This is the first time the two parties came together to work together… in a single government. There will be a lot of differences to iron out as we move along, but those differences will be sorted out for the benefit of the people. What is important is that we take the correct decision in the end.

Q: There is no bitter feeling between the two camps in the aftermath of this incident?

A: No. Actually we have a bigger responsibility towards the people and to take this coalition forward.

Q: The JO protest march is all about Value Added Tax (VAT)…. Are you trying to take back the benefits given to the public during the 100 day program, through the proposed VAT increase?

A: No. Those benefits will continue. The government has to increase the VAT as a temporary measure because of the huge debt burden created by the previous government. You might ask, if we were ignorant of this before January 2015. Yes, no one knew because these loans did not come via the standard procedure.

The Sri Lankan government always takes loans through the Treasury, or through a direct government-to- government borrowing system. The previous government practised a new method. It took loans through state banks. These accounts did not come to the accounts of the government. Therefore, the annual debt and budget deficit did not reflect the correct state of affairs – the component of state debt.

When finally that was calculated and added to the official government debt, it was a shocking amount. The government needed to raise massive amounts of funds through legal means to repay those loans taken by the previous government in nefarious ways, so as not to put the country in jeopardy.

At one point, the previous government charged 20% VAT. It was reduced to 12% and when we came to power it was further reduced to 11%. Therefore the actual increase of VAT by this government is only 3%.

There had been worse tax structures earlier. People never revolted or organised protests under every lamp post like this when VAT was at 20%. I cannot understand this reaction by the people. May be they were scared to air their grievances during the previous regime. Under the good governance government anyone is free to protest and hold demonstrations.

We have already informed the public that this is only a temporary measure, until we repay the ‘secret debt’. The government has already negotiated with the World Bank and the ADB for soft loans on very reasonable terms. When these loans are realised, we will get rid of the VAT.

Further, we will submit a Cabinet Paper shortly to increase the tobacco tax from 72% to 90 %.

The tobacco tax increase will collect more revenue than the proposed VAT increase. As the Minister of Health I will jointly submit that paper with the President who was the former Health Minister. We have proposed to exempt the VAT increase for the entire medical sector.

With the increase of the tobacco tax, the government could even consider dropping the 4% VAT increase for all goods.

Q: The Supreme Court has stayed the VAT increase. What is the way out for the Finance Ministry to collect needed state revenue in the coming days ?

A: The Supreme Court has taken this decision because the VAT increase preceded parliamentary approval. The Budget proposals are gazetted and come into effect from midnight the same day they are read in Parliament. But the House will approve the Budget proposals after about six weeks. That is the usual norm. If this argument on VAT is valid, then it affects the Budget as well. Someone can go to courts against the Budget proposals as well.

The government follows this practice for any tax revision. They are announced this way, to stop unscrupulous traders from trying to manipulate the market. The JO is exploiting this issue for petty political gains, that will be a temporary solace. They cannot continue and sustain their protests over VAT. It will be resolved soon.

Q: The government seems to be making one blunder after another. First it was the Central Bank Governor’s issue, now VAT and the next would be the coal tender. Your comments ?

A: They are not blunders but opinions expressed by different parties. Even the Central Bank issue was finally settled to the benefit of the people. The VAT issue will also be resolved soon so that people will regain confidence, and the government will become popular.

About the coal tender, there are only accusations of corruption, we will look into that and see what has really happened.

Q: The JO is claiming that the Government is purposely postponing local government elections because the JO will secure a thumping victory. What is the reason for the elections to be postponed in this manner?

A: The local government election is to be held under a new electoral system and the demarcation of new boundaries is taking place. Once the Commission of Elections finalizes the modalities of the new system – combining the first past the post and proportional representation, the dates for elections can be fixed. When there is a new system, it is inevitable that things move slowly at first.

After that we will have the elections for the people to see if the joint opposition can win.

Q: Local Government and Provincial Councils Minister Faizer Mustapha has said the local government elections will be held in the first quarter of next year ?

A: Yes, that is the expectation of the government but everything will depend on the decision by the Elections Commission. Demarcation of electoral wards is nearing completion now.

A: Yes, we are planning to have a Council with more powers, to have an independent media. There will be some system to have a disciplined Media too, it is the need of the hour. The good governance government will in no way try to suppress the Media, we will always uphold the freedom of the press.