HomeNewsSri Lanka: Hands Off The Media 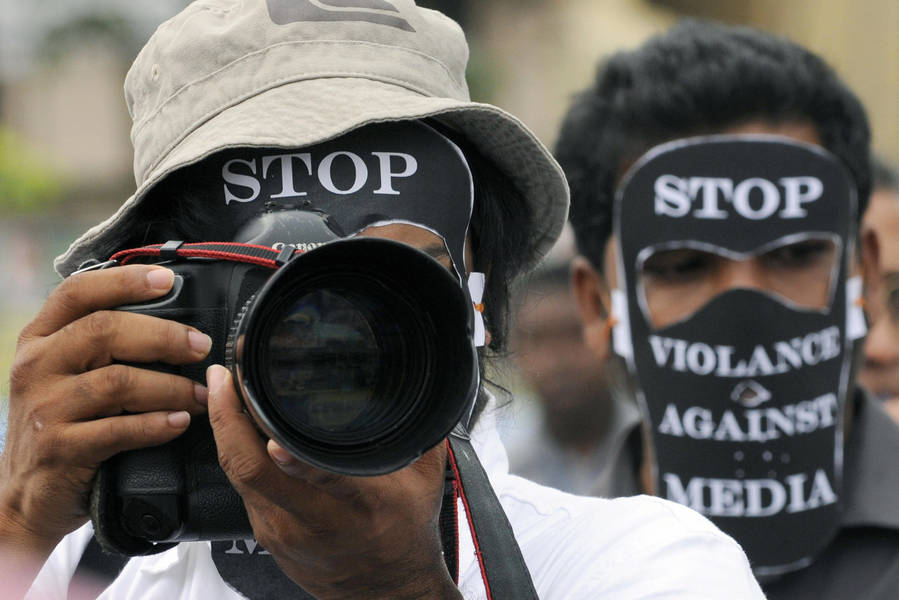 Media freedom is a topic much bandied-about, yet, despite countless discussions, many believe we are yet to make much headway in the right direction. The previous regime had many issues with regards to media freedom. Since the Yahapalana government had assured drastic changes to the then culture of oppression, many hoped that under the new government, media freedom would be re-established.

However, when we look at what is currently taking place in the country, it is doubtful as to whether any real change has taken place. On several occasions we have witnessed Prime Minister Ranil Wickremesinghe unleashing his wrath upon media institutions by openly criticising them. One may argue that anyone should have the right to criticize but his words carried a message of threat rather than constructive criticism. All in all, the Prime Minister’s conduct has now become subject to wide discussion.

The Prime Minister who has from time to time since coming to powerlambasted the media, once again took on the media on Saturday, warning certain media organisations against playing with his government, and also threatening to reveal names of certain journalists who benefited financially during the previous government. Speaking at an event held in Kandy on Saturday, Wickremesinghe said that certain print media organisations were conspiring against the current government because they (journalists) too have been hit since the change of government.

“The Daily Mirror is telling us to remove Mangala Samaraweera as Foreign Minister. Sometime back, even the Daily Mirror editor said I should quit. I think she is the one who should go; if not we must see what we can do about it,” he said.

Wickremesinghe also criticized the Financial Times saying it too was playing a part in conspiring against the government. “If rogues are trying to topple the government then we are ready to take them on,” the Prime Minister declared.

“Do not play with this government; we came to power with a mandate from the people. If they tell us to leave in five years, then we will, but we won’t go just because rogues want us to leave,” Wickremesinghe added.

The Sunday Leader sought the opinions of several media personalities, intellectuals and civil society representatives regarding the gravity of these harsh statements made by the Premier. Following are excerpts of some of their comments.

Media harassment is not a new thing in Sri Lanka. For many years we witnessed how the authorities tried to silence media by using any means necessary. After assuming office, the new government was able to reduce the level of mediaoppressionto a certain extent. But still no local or international organisation has named Sri Lanka as a country with proper media freedom. Recently the Prime Minister publicly threatened several media institutions by naming them. As I see it, there are two modes of media oppression practiced by the present government and its predecessor.

The Rajapaksa regime never threatened any media openly. Their method was secretly abducting any person who objected to their views by using white vans or making them flee the country in fear of their lives. Under this method many senior journalists such as Sunanda Deshapriya and Poddala Jayantha had to flee the country and spend time in custody. Some even had to pay the ultimate price with their lives for speaking against the regime.

The present government is carrying out the same level of oppression but by using different tactics. However, no government that had attempted to suppress media freedom was able to last long in power. Media is not a force that can be held at bay with threats. Although there may be a handful of journalists who work for money and privileges, the majority of media is unbiased and independent. They can never be intimidated by threats.

Although we have exposed countless corrupt deals of the previous government with evidence that could bring the culprits before justice, the Prime Minister has so far paid no attention toanything in that regard. Instead, he has started to accuse those who exposed the culprits.

This is a serious issue. The previous government was able to skillfully control many media institutions by buying off their bosses. They hoped that it would break down the unity of media organisations. They lavishly gave out privileges and high positions to these media chiefs. If a government tries to buy off journalists by giving out positions and privileges, that is a serious problem.

As a head of a media institution, I would severely criticize the conduct of the Prime Minister. It is not up to the government to attempt to do the duty of the media by trying to assault its opponents in public. There is an accepted way of responding to criticism. The government can respond to any criticism made against them by following that correct procedure. If something wrong has been done, the government has the right to take legal action. Instead, it cannot go berserk in front of the public.

The Prime Minister has said that there are overall opinions that are continuously played by several media organisations, which is wrong.

He has a right to say that in some instances the media is corrupt. Everyone has their own opinion about the media. It is not something that is immune from criticism. Journalists are not saints. It is wrong if we had assaulted, abducted or murdered journalists or if we had ransacked media institutions.

No such thing has been done.

The press is expressing its opinion. The politicians express theirs.

If what the Premier had said is factually incorrect then we could discuss it. What we can do is ensure that media freedom is preserved in this country.

No thuggery, no killing or any undue influence shall be made against the media. Just as the media can enjoy their freedom, the PM can enjoy his.

There are certain things in the PM’s speech that we should take into consideration. Anyway there is a problem with the manner in which the Prime Minister has made his point. The report read by the Premier is something that had been sent by someone else. It was about the removal of the foreign minister. I cannot say whether this was something that was intentionally published by the media.

However, it is important that the Prime Minister is engaged in a proper discussion regarding these issues with media institutions. It is vital at this point. The PM has a good understanding about media. He hails from a family that had good ties with the media. So I think that some of the comments he made in anger have now been used against the Yahapalana government. Certain people are trying to reap undue benefits by misusing these comments.

The relationship between the government and media must be decided through lengthy discussions. Then we could agree upon the limits. These incidents must not continue. We have to admit that some degree of media freedom has been established under the present government compared to the previous regime. A weekly Sinhala newspaper had recently published a hypothetical report of the opinion of the Muslim community with regards to the ‘non-religious’ propositions that have been made to the Constitution. It is not a wise thing to publish such reports to trigger religious and racial hatred once again. In my experience, even if we respond to these claims they are not being published. So we must look at this in an unbiased manner. However, it is very important that a discussion must be held about threatening journalists.

All this is only going to create a wrong impression in the public mindset about the government and the media. So far there has been no constructive dialogue among media organisations regarding the matter. We hope things would change in the future.

No one has a right to threaten the media

There can be conflict of opinion between politicians and journalists. It is a natural phenomenon. But there should be a mature way of criticizing each other. Not only for the journalist, if there has been any criticism, there is a proper way of doing it. Instead, if anyone tries to criticize by threats, then that is not a good sign. We have continuously said that even though there is a right for anyone to criticize media, no one has a right to threaten them.

Here we see something that has gone beyond a mere criticism. This is not good for the future of the country. So we hope that the government would be more responsible in future with regards to its relationship with the media.  As a media organisation we have raised several issues regarding this incident. We have focused on the threatening tone of the Prime Minister. He must explain his motives to the country. Until then we are concerned of this statement.

We have continuously condemned these statements of the Prime Minister. But the government has so far not done anything about it. The media minister is holding discussions with media chiefs on reforms that must be carried with regard to media responsibility.

So far these issues have not been taken up for discussion in these talks. In the future we would urge the parties to discuss these issues properly.

We don’t want a repetition of the past

The Prime Minister has made various statements about the media in the past. The most recent development is the speech he made in Kandy, where he accused two media institutions and their editors by name.

First of all, this is not an appropriate way for a Prime Minister to behave. He is not making these accusations in a proper way. If any party has been aggrieved by the conduct of any media institution, then there is an established legal procedure that can be followed to seek remedies. Instead, if he is making these open allegations while preaching about democracy and media freedom, he must explain his motives for choosing this irregular path. He must make himself clear on whether these are proper accusations or signs of media oppression. Ironically, so far it seems as if he has threatened the media.

We condemn the recent statement as well as the previous statements that have been made by the PM regarding media oppression. There are issues that we could agree upon. But this is not the way to say them. If there are corrupt journalists, rather than naming them in public without any evidence, he must expose them with sufficient evidence.

A journalist may have a political agenda but within the confinements of profession, a journalist cannot be biased. We must act in a way that does not disrupt the peace, harmony and co-existence of this country. If any journalist is attempting to break these social values, then they must be dealt with according to the law and not through public humiliation. That is a threat to media freedom. This is not what we expect from a Yahapalana government. We see a lack of unity among media organisations these days. But we hope to once again rally all forces that fought united to topple the previous regime. We must decide what our policy should be under the present circumstances and how we should respond to these issues.

The Premier has said that he would have to teach journalists a lesson. So he must reveal to the country what sort of lesson he is intending to teach as a high-ranking official in the government. If we do not act quickly, we may see a repetition of the horrid past once again.