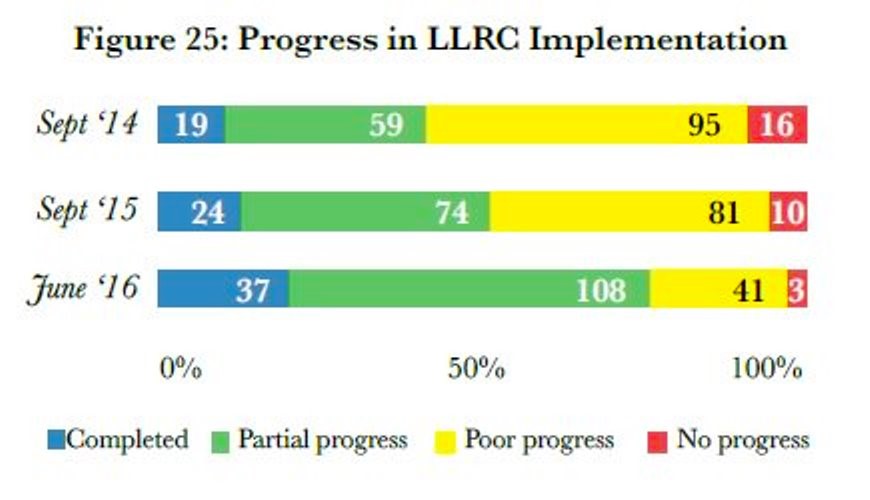 Looking at the positives, the study notes that the Sirisena-Wickremesinghe government has signed the International Convention on Enforced Disappearances. The cabinet has approved a proposal to set up an Office of Missing Persons and has also decided to issue Certificates of Absence to the families of missing persons.

The report on the Public Representations Committee on Constitutional Reform has submitted its report and the Constitutional Assembly, which is to write a new constitution for the country, has set up sub committees, including one on power sharing.

The government had lifted the ban on 269 Tamil individuals and eight Tamil Diaspora organizations saying that their links to Tamil militancy were not established.

On the negative side, the report observes that there has been no progress on the promise to substitute the Prevention of Terrorism Act (PTA) with a new anti-terror law which will be in line with international best practices. Arrests under the PTA took place only recently when a cache of weapons were found in Chavakachcheri in Jaffna district.

“There has been no review of convictions under PTA, including those secured on the basis of confessions and torture in custody,” the report says.

Verite Research quotes Prisons Minister D.M.Swaminathan to say that in March 2016, there were 158 PTA detainees in 11 prisons, out of whom 32 had been convicted.

It notes that government is yet to investigate the 2014 anti-Muslim riots in Aluthgama in which four people were killed. The riots, (instigated by the pro-government Bodu Bala Sena), had turned the Muslims en masse against the then President Mahinda Rajapaksa in the January 8 2015 Presidential election.

8,218 acres in North Still With Military.

Despite President Maithipala Sirisena’s promise to get the military to return all civilian lands it had taken over during the war years within six months of coming to power, 8,218 acres belonging to private citizens are still with the armed forces in the Tamil-majority Northern Province.

This is so even though the government owns 29,605 acres in that province, the report informs, the report says.

The India-inspired 13 Constitutional Amendment of 1987, had made it mandatory to form a National Land Commission to draft land policy. But the commission is yet to be established. The result – the Minister of Lands determines land policy “unconstitutionally.” In 2013, a census of deaths, injuries and damage to property during the conflict was conducted, but it is yet to be published, the report notes.