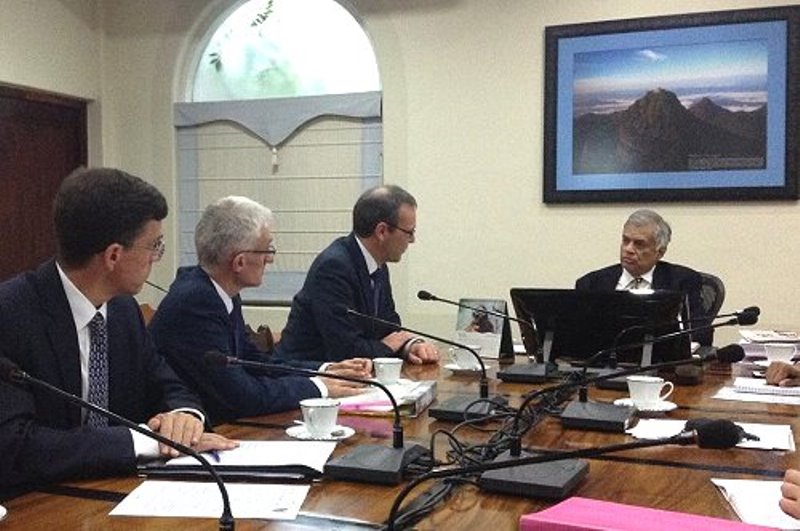 Head of the British Diplomatic Service Sir Simon McDonald and Secretary at the UK Department for International Development Mark Lowcock visited Sri Lanka yesterday to meet with high-level government officials and discuss Sri Lanka’s progress on reconciliation. During their visit they also met with representatives of many of the organisations implementing UK funded projects in Sri Lanka in the areas of good governance, anti-corruption, de-mining and police reform.

Sir Simon and Mr. Lowcock also met with Leader of the Opposition and the Tamil National Alliance Hon. R. Sampanthan and heard from him about a political settlement and challenges facing the people in the north and east.

The UK has supported police reform to encourage community oriented policing to improve local safety, security and post-conflict stability. Furthering the discussion on UK support Sir Simon and Mr. Lowcock met with Minister of Law and Order & Southern Development Hon. Sagala Ratnayake. At the meeting British High Commissioner to Sri Lanka H.E James Dauris signed a contract with The Asia Foundation to continue UK funded community policing initiatives in Sri Lanka. Mr. Lowcock also met with Minister of Prison Reforms, Rehabilitation, Resettlement and Hindu Religious Affairs Hon. M.A Swaminathan and heard from him on land-returns and the return of IDP’s and briefed him on UK government support for demining.

In a meeting with the Commission for the Investigation of Allegations of Bribery or Corruption (CIABOC) they discussed UK support towards anti-corruption work and the need for international cooperation to ensure that those who are responsible are held to account. UK support has included having officers from the Serious Fraud Office (SFO) in the UK, working with Sri Lankan investigators and prosecutors in Colombo.

The UK will continue its programme of support for Sri Lanka to help the government fulfil its goals on reconciliation, human rights and strengthening democracy.