Joint Statement From the U.S. Department of State and the Ministry of Foreign Affairs of Sri Lanka on the Inaugural U.S. – Sri Lanka Partnership Dialogue.

Sharing a commitment to democracy, rule of law, and shared prosperity, the United States and Sri Lanka convened the inaugural Partnership Dialogue on February 26, 2016 in Washington, DC. Both nations highlighted the growing bilateral cooperation between Sri Lanka and the United States and reaffirmed that the relationship is based on shared values and common goals of the two countries and their peoples.

The Partnership Dialogue demonstrates the consolidation of cooperation between the United States and Sri Lanka and serves to further strengthen and enhance bilateral relations in the widest sense, through regular and structured engagement. As fellow democracies, our governments agree that we have a shared interest in working together to foster greater stability, security, prosperity, and a rules-based order for the Indo-Pacific region and around the world.

Building on a long legacy of support for the Sri Lankan people since 1956, the United States plans to launch several programs to encourage investment in Sri Lanka’s economy, assist the government in its efforts to institutionalize good governance best practices across key ministries, and support the process of reconciliation and development to which the government and people of Sri Lanka are committed. These efforts are to be undertaken with a view to achieving durable peace and socio-economic progress for all. U.S. assistance and cooperation should help forge new partnerships, dialogues, and exchanges, and be based on mutual respect and inclusive consultations.

The delegations discussed Sri Lanka’s pivotal geo-strategic location within the Indian Ocean Region and how to strengthen cooperation on issues of regional importance bilaterally and through multilateral organizations like the Indian Ocean Rim Association. The United States encouraged Sri Lankan participation in its Indo-Pacific Economic Corridor initiative to increase economic connectivity among South Asian countries and with Southeast Asia, which is congruent with Sri Lanka’s participation in BIMSTEC and other forums. Both governments affirmed a shared desire to continue to collaborate on issues before the United Nations, including peacekeeping operations. Foreign Minister Samaraweera looks forward to participating in the 2016 Our Ocean Conference in Washington, D.C., hosted by Secretary Kerry, which is to focus on robust commitments to protect our oceans under the four focus areas of marine protected areas, sustainable fisheries, marine pollution, and climate-related impacts on the ocean. 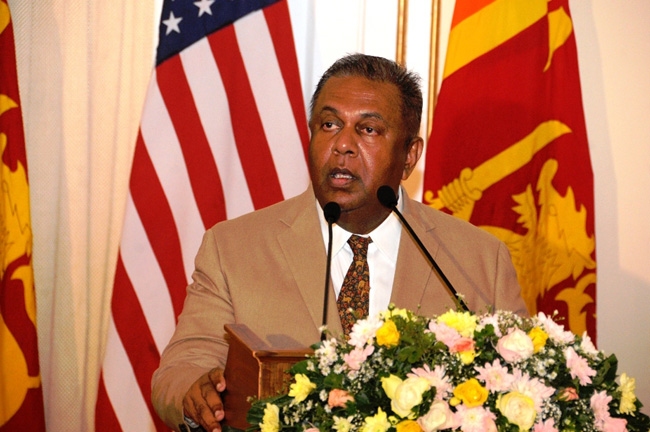 Economic discussions highlighted Sri Lanka’s economic priorities and joint cooperation to expand trade flows, increase foreign direct investment, and improve the overall business environment in Sri Lanka, such as fair and transparent competition practices. Sri Lanka’s delegation appreciated the lifting of the U.S. legislative mandate against supporting Sri Lankan projects at international financial institutions and the U.S. vote in favor of a recent project at the Asian Development Bank, which will deliver $100 million to Small and Medium Enterprises in Sri Lanka. The next Trade and Investment Framework Agreement (TIFA) Council meeting to be held this year should initiate deepened engagement through development of the U.S. –Sri Lanka Joint Action Plan to increase external trade and investment. This Action Plan, a road map for future work under TIFA, reinforces Sri Lanka’s development strategies and fosters an increased role for foreign direct investment and external trade in Sri Lanka. It also seeks to improve the competitiveness of key industries; promote new industries through innovation; and fully leverage Sri Lanka’s location and skilled workforce. The two sides intend to explore during the TIFA meeting opportunities for exchanging customs information to facilitate the free flow of goods.

Both sides recognize their shared interest in clean energy development and energy security and reiterated their commitment to deepen cooperation to develop and access affordable, clean renewable energy sources. The United States also agreed to explore ways to support and assist Sri Lanka in the implementation of Sri Lanka’s Climate Action Plan, including adaptation projects. Officials from the Millennium Challenge Corporation said they would visit Sri Lanka in March to begin discussions on Sri Lanka’s threshold program. The Export-Import Bank of the United States looks forward to enhanced engagement with Sri Lanka and its private sector, particularly in the area of infrastructure investment.

The delegation of Sri Lanka emphasized the commitment of the government to strengthening democracy and democratic practices, good governance, the rule of law, justice, reconciliation, and parliamentary procedures.

The United States welcomed the significant progress made in many areas during the past year, especially the passage of the 19th Amendment to the Constitution which enabled the setting up of independent commissions, and Sri Lanka’s co-sponsorship of a consensus resolution at the United Nations Human Rights Council in September 2015, which demonstrated Sri Lanka’s strength as a nation committed to achieving lasting peace and prosperity inclusive of truth-seeking, justice, reparations and guarantees of non-recurrence that includes providing closure to the families of the missing, and implementing appropriate reforms to enhance the professionalism of security institutions.

The United States expressed support to Sri Lanka in fully implementing the commitments as agreed in the Human Rights Council resolution.

The United States expressed support for the Government’s plans for constitutional and legislative reform including public consultations on a new Constitution and the repeal of the Prevention of Terrorism Act to be replaced by appropriate counter-terrorism legislation consistent with international law. The United States praised the government of Sri Lanka for its return of land to the rightful owners, and urged that remaining land be returned swiftly.

The U.S. Government continues to be proactive in responding to the government’s reform agenda in strengthening democratic and economic governance, rule of law, truth and reconciliation. In October 2015, the United States Agency for International Development (USAID) launched the Sri Lanka Parliament Support Program to build capacity for the newly elected Members of Parliament and their professional staff to fully carry out their policymaking and oversight functions. Similarly, USAID is helping to strengthen public sector accountability and transparency through support to key independent commissions enshrined in the 19th Amendment. The United States and Sri Lanka plan to work together to strengthen the Sri Lankan justice system’s capacity to address criminal activities, including complex crimes such as corruption at all levels, and to deliver fair and equitable justice services to citizens.

With a view to assisting the Government of Sri Lanka in strengthening good governance and the rule of law, the United States agreed to consider Sri Lanka’s requests for assistance through programs and projects aimed at strengthening accountable and responsive governance institutions and capacity building; training and assistance for enhancing accountability, transparency, integrity, and effectiveness of public administration; and inclusive and effective service delivery including local governance.

The two countries reiterated their commitment to active and high-level participation in the Open Government Partnership as a strong vehicle for reform, and to pursue robust partnerships with civil society under the Open Government Partnership; and the United States reaffirmed its commitment to supporting Sri Lanka’s work with civil society in the development of its first National Action Plan.

The two nations plan to foster stronger cooperation on women’s empowerment and the advancement of gender equality including by supporting efforts to exchange lessons learned and best practices to enable women’s economic participation, the prevention of and response to gender-based violence, and greater women’s participation in reconciliation efforts.

The two nations reiterated their commitment to the Fulbright Program for student and scholar exchange. They also identified education as an important area for future cooperation and underlined the importance of developing further partnerships between U.S. and Sri Lankan educational institutions.

Recognizing that Sri Lanka faces a number of development challenges – from the scourge of chronic kidney disease to food insecurity in rural areas – the U.S. Government expressed its commitment to partner with Sri Lanka to address these issues. The two governments also plan to support multi-cultural, multi-religious, multi-lingual people-to-people dialogue throughout Sri Lanka.

The delegations aim to expand export control cooperation through the Export Control and Related Border Security program in support of nonproliferation objectives. Both nations recognized the need for greater counterterrorism and intelligence cooperation and information sharing as well as capacity building in view of increasing transnational threats. Both countries also expressed commitment to continue to cooperate to counter money laundering, terrorist financing, and violent extremism. Recognizing the importance of international cooperation to promote an open and secure cyberspace, and Sri Lanka’s standing as the only South Asian nation party to the Budapest Convention, the two sides agreed to explore opportunities for collaboration on cybersecurity and to combat cybercrime.

Together, the United States and Sri Lanka recognized the importance of their bilateral relationship and expressed commitment to broadening and strengthening the bilateral partnership. Both delegations expressed satisfaction at the successful completion of the inaugural Partnership Dialogue and agreed to hold the second Partnership Dialogue in Colombo in 2017.