BUENOS AIRES (Reuters) – President Barack Obama will honor victims of Argentina’s “Dirty War” on Thursday, the 40th anniversary of a military coup that led to a seven-year crackdown against Marxist rebels, labor unions and leftist opponents.

Obama described the 1976-1983 dictatorship, during which the Argentine security forces killed up to 30,000 people, as a “dark period” in Argentina’s history. But he has stopped short of apologizing for the United States’ early support for the junta.

He promised on Wednesday to declassify military and intelligence records related to the dictatorship-era, a time when Cold War thinking often put Washington behind right-wing governments in Latin America.

Obama will visit a memorial park during his second day in the country. The president said the symbolic stop was meant “to make sure that we acknowledge the incredible heroism and courage of those who stood up against these human rights violations.”

Many Argentines welcome both gestures.

“Obama is not going to say outright ‘forgive us’, but he’s saying it through his actions,” said Daniel Slutzky, a 75-year-old college professor.

Obama said U.S. foreign policy history includes “moments that were counterproductive, or contrary to what I believe America should stand for”. But that was not enough for opposition newspaper Pagina 12, which chided him for showing “a lack of self criticism” regarding U.S. support for the dictatorship. 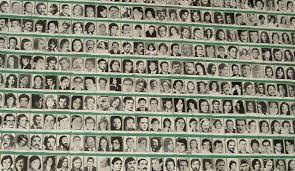 His visit to Argentina is a show of support for President Mauricio Macri’s sharp turn away from the nationalist policies of his predecessor, Cristina Fernandez, who frequently railed against the United States and Wall Street.

The U.S. president flew to Argentina from Cuba, where he challenged President Raul Castro on human rights and political freedoms even as the two men cast aside decades of hostility that began soon after Cuba’s 1959 revolution.

Obama said on Wednesday it was “gratifying to see Argentina champion our shared commitment to human rights”. Yet Macri’s opponents balk at the suggestion the socially conservative leader is a rights defender.

One group of victims’ relatives labeled the timing of Obama’s visit a provocation.

“We will not allow the power that orchestrated dictatorships in Latin America and oppresses people across the world to cleanse itself and use the memory of our 30,000 murdered compatriots to strengthen its imperialist agenda,” the group said in a statement.

Later on Thursday, Obama will switch briefly into vacation mode, traveling with his family to the lakeside town of Bariloche in Patagonia for the afternoon before returning to Washington.