(Yoshitha Rajapaksa shows hand cuffs to the media as he is taken away in a prison bus. Photo: 30 January 2016 -AP)

Much of the Hindu epic, the Ramayana, is set in Sri Lanka. But the island has seen something of a modern epic in the past year or so, with the crashing fall from grace of the family which once appeared to run most aspects of life there.

Once Mahinda Rajapaksa lost the presidency a year ago, his successor set about unravelling the network of power the Rajapaksas had built.
In the latest examples, this week the former president’s wife was questioned over corruption allegations, and one of their sons was arrested over suspected money-laundering, as the BBC’s Charles Haviland reports.

Hours after the arrest of his son, Yoshitha, a photographer caught the ex-president with eyes full of tears, attacking the money-laundering charges as acts of revenge against him and his family.

The picture showed how starkly the fortunes of this once invincible clan have tumbled since Mr Rajapaksa senior was ousted from office early last year.
He, his two once-powerful brothers – one of whom controlled defence and the other the economy – and his wife and two of his sons have now all been either detained or questioned on a long list of charges including weapons offences, all of which they deny.

Many in the Sinhalese majority revered Mr Rajapaksa for crushing the 30-year Tamil separatist insurgency, notwithstanding the massive civilian casualties that caused such outrage among human rights advocates.

But at the same time, Sri Lankans had grown increasingly disenchanted with the family’s enjoyment of the trappings of office. 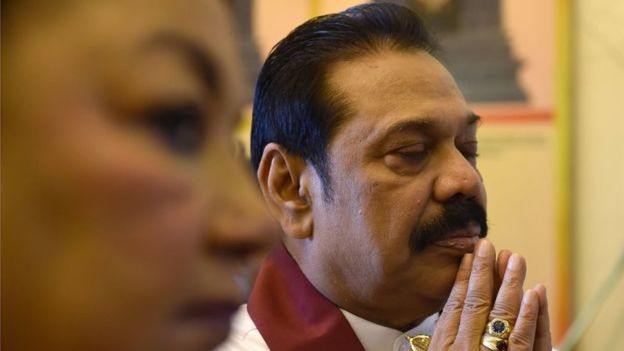 Mr Rajapaksa (right) remains popular with much of the Sinhalese community

The authorities now also allege that young Mr Rajapaksa had been inappropriately promoted in the navy and was given numerous privileges.

Last year, a minister alleged that former presidential security staff had murdered a young rugby player said to have been vying with a presidential son for the affections of a woman.

It is not only the Rajapaksas who are feeling the weight of the law. Others now doing so include members of the military and Buddhist monks – two groups hitherto seen as pretty much invulnerable.

In October in a highly unusual case, four soldiers were given long prison sentences for the gang rape of a Tamil woman.
Five intelligence personnel are now under arrest over the case of dissident journalist-cartoonist Prageeth Ekneligoda, who vanished six years ago.

And last month a hardline Buddhist monk, Gnanasara Thero, was arrested after storming into a court investigating that disappearance, swearing at the officials and at the missing man’s wife.

There is structural change at work, too.

state media have been freed from the tight grip of government control.

‘Bread must be made’ 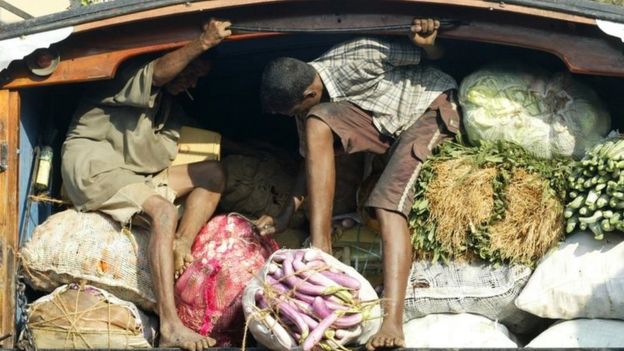 Two men ride on back of open truck, whilst holding in food produce for sale at market stall in Colombo.

Yet for everyone apprehended for alleged misdeeds, there are plenty more walking free.

One is Mervyn Silva, a man with a fine line in dark glasses who, farcically, was appointed public relations minister in the Rajapaksa government. He was well-known for his growling threats to “break the limbs” of dissidents, and admitting to using thuggery.

A few years ago he tied a local government official to a tree to make an example of him. The man later fled the country, saying his life had been destroyed.
Mervyn Silva was initially suspended from the governing party after this incident; but a subsequent party hearing cleared him of all charges.

Today Mr Silva remains at liberty – probably because he has pointed the finger at his former protectors, the Rajapaksa brothers, publicly accusing them of causing enforced disappearances.

Also not touched are dozens of other former Rajapaksa-era politicians who have declared their allegiance to the new order or become useful to the new government, and have been given ministerial jobs.

And it is notable that there have been very few actual prosecutions of those arrested. For some people it has called into question how sincerely the government is really trying to assert the rule of law.

As he colourfully put it, the griddle had been heated up for the president to make the bread – not to bask in its warmth.
Now, he said, the griddle was at the right temperature – and the bread must be made.