(Hundreds of supporters of the Sri Lankan opposition political parties protest outside the UN office in Colombo. They criticised a report by United Nations human rights chief Zeid Raad al-Hussein as he began discussions with the Sri Lankan government on measures taken to investigate alleged atrocities committed during the long civil war. Photo: AP)

Hundreds of hardline nationalists gathered outside the United Nations’ office in the Sri Lankan capital Colombo on Saturday to protest against a visit by the UN human rights chief who will assess Sri Lanka’s progress in prosecuting alleged war crimes.

The UN says both Sri Lanka’s military and the Tamil Tiger rebels most likely committed war crimes during a 26-year war which ended in 2009. A UN resolution calls for post-war reconciliation and that all alleged war crimes be investigated and tried in special courts by international judges.

However, many Sri Lankans oppose foreign involvement and supporters of former president Mahinda Rajapaksa believe the UN resolution aims to punish the military unfairly despite defeating the Tamil Tigers.

Although the coalition of President Maithripala Sirisena has agreed to the resolution, the visit by UN High Commissioner for Human Rights Zeid Raad al-Hussein follows comments by Sirisena saying that foreign participation was not needed for an impartial inquiry into the war. Al-Hussein began his four-day visit to Sri Lanka by visiting the UN office in Colombo to meeting officials.

Hours afterwards, protesters outside shouted “al-Hussein, hands off Sri Lanka” and “where were you when people in Afghanistan and Iraq were killed?”. 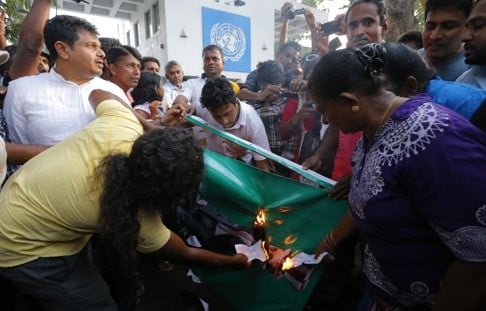 Some held banners which read, “no war crime courts, no foreign judges” and “don’t send the military to guillotine”. They also set posters bearing al-Hussein’s face on fire and threw shoes and slippers at his image.

“We will not allow to set up courts to fulfil the need of Western nations. Al-Hussein has come here to take our war heroes to guillotine, but we won’t allow that to happen,” Wimal Weerawansa, the NFF leader told the gathering.

Al-Hussein said soon after his arrival he would meet Sri Lanka’s highest officials as well as representatives of all communities.

“I will be listening to everything that they have to say and look forward to a very constructive discussion in the days to come,” he told reporters.