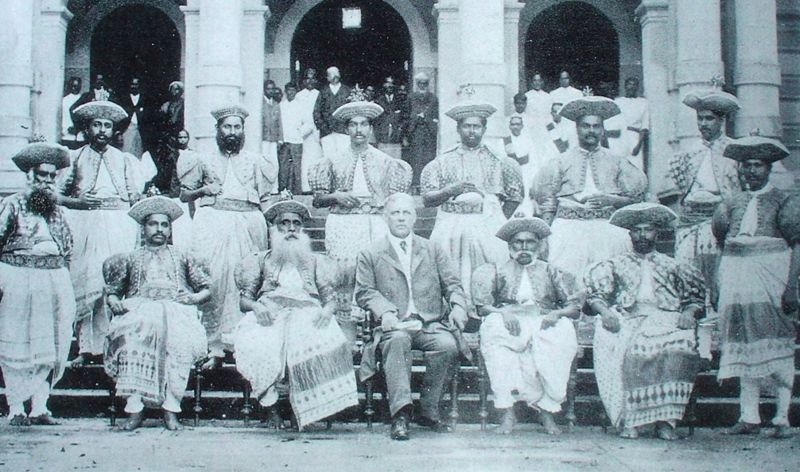 The President and Prime Minister have given the UN Human Rights Commissioner an assurance that last year’s UN Human Rights Council resolution against Sri Lanka will be implemented. This UNHRC resolution was accepted and co-sponsored by the Sri Lankan government and passed by the UNHRC without a vote. The UNP led government accepted the Geneva resolution with the same carelessness with which they entered into the ceasefire agreement with the LTTE in 2002. Though our Ambassador in Geneva tried to negotiate different terms that was deliberately stopped by the government which insisted on accepting the US sponsored resolution just as it was. There is now an attempt to portray this UNHRC resolution as a great diplomatic victory for Sri Lanka. But in reality, it was a great betrayal comparable to the Kandyan Convention of 1815.

The people should once again be reminded about what exactly has been undertaken by accepting this resolution. In operative paragraphs 1, 4, 6, 7, 8 and 12, the present government has accepted the report of the Office of the High Commissioner on Human Rights which said that war crimes including the killing of civilians, torture, and the deliberate starvation of people had been committed by our armed forces and they have agreed to set up a war crimes tribunal manned by foreign judges, prosecutors and investigators and funded directly from overseas to try our war heroes for these alleged crimes. Furthermore they have agreed to remove through administrative action members of the armed forces who are suspected of having committed war crimes but against whom there isn’t enough evidence to place before the war crimes tribunal. They have also agreed to make amendments to the Public Security Ordinance and to repeal the Prevention of Terrorism Act.

In operative paragraphs 16, 18 and 20, the government has undertaken to devolve power in order to bring about a political settlement Sri Lanka and to do everything undertaken in the resolution under the supervision of the Office of the High Commissioner on Human Rights (OHCHR).

It should be borne in mind that the OHCHR that has come in for heavy criticism by the UN Human Rights Council itself. The UNHRC passes every year (with more than a two thirds majority) a resolution calling upon the OHCHR to end the domination of that office by Westerners and to reduce its dependency on Western funds. The government has thus agreed to place Sri Lanka under the supervision of an institution that is facing criticism by the UNHRC itself for its Western bias.

Having accepted the Geneva resolution, the government is now adopting various strategies to convince the public that it will not be harmful to the country. We saw the President and Prime Minister in recent days expressing to the international media what seemed to be contradictory views on the participation of foreign judges in the proposed war crimes mechanism. But this was just a drama for public consumption.

The war was won by an SLFP government led by me. It is a matter of profound regret to me that our party has been subordinated in this manner to the UNP which tried to sabotage the war effort at every turn. Many would recall the manner in which the UNP even tried to stop the war by defeating the government at the budget vote in 2007. When that did not work, members of the UNP ridiculed the war effort by saying among other things that ‘any ox can fight a war’ and that ‘while claiming to be advancing on Alimankada the army was actually moving towards Pamankada’. It is not surprising to see such people now trying to exact revenge from those who won the war.

However, I am profoundly saddened to see that a section SLFP has also joined the UNP in this great betrayal. The UNP may be deriving a great deal of satisfaction by thus getting a section of the SLFP which won the war to underwrite every traitorous act they commit. I call upon the people of Sri Lanka to unite and resist this attempt by the government to betray the country and our war heroes.