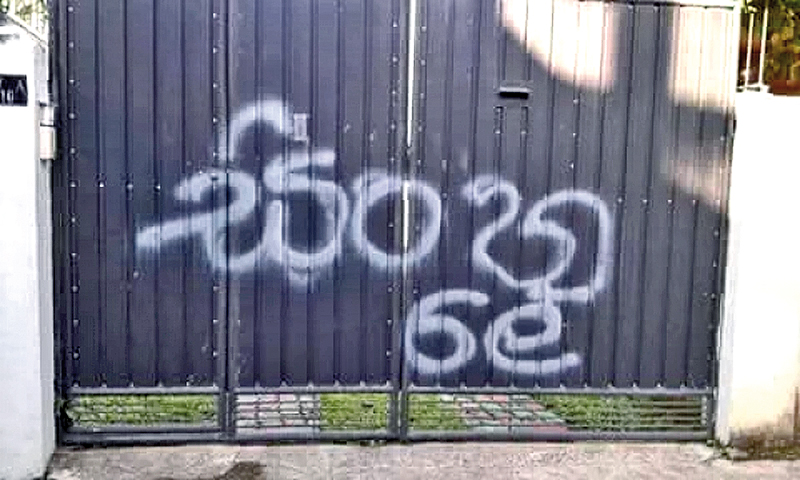 Some Muslim residents in the Nugegoda area were disturbed to find that their walls and gates had been spray painted with the word ‘Sinhale’ by some unidentified groups in a January night.

The participation of Prime Minister Ranil Wickremesinghe, former President Chandrika Kumaratunga and visiting British Minister Hugo Swire at the Thai Pongal celebration in Jaffna is an indication of the special attention that is being given to the northern polity by the government. The top leaders of the government have been making frequent visits to the north in a way that is unprecedented. During the years of the war it was dangerous for government leaders to visit the north as they were vulnerable to being attacked by the LTTE and other militant groups. But even prior to the war there was reluctance on the part of leaders of government to visit the north. Neville Jayaweera, in his memoirs of his time as a civil servant who dealt with the north five decades ago, writes about the petty manner in which the government leaders of those years turned down opportunities to visit the north. In contrast, President Sirisena and Prime Minister Wickremesinghe are frequent travelers to the north.

However, in his speech in Jaffna on the occasion of Thai Pongal, and with the Prime Minister and British Minister in attendance, Chief Minister of the Northern Province, C V Wigneswaran was extremely critical in his assessments, claiming the presence of 150,000 soldiers as particularly detrimental to the restoration of normalcy. He spoke of the failure to free more land held by the military and the failure to abolish the Prevention of Terrorism Act. He also blamed the government of interfering in the work of the Northern Provincial Council and complained over letters being sent to him from State institutions written in the Sinhala language. The slow progress made in terms of restoring normalcy to the lives of those large numbers of people living in the north and east who are war-affected has elicited sharp and strident criticism from a wide arrange of politicians and civil society activists.

In the absence of rapid and comprehensive actions on the ground that would assuage Tamil sentiment and doubt regarding the government’s seriousness to resolve these problems, the government has been attempting to demonstrate goodwill through symbolic actions, such as was manifested at the Thai Pongal celebrations in Jaffna. Another such symbolic act was the President’s gesture of reconciliation in granting a pardon to a former member of the LTTE Sivarajah Jeneevan, who had been convicted and imprisoned for having attempted to assassinate him in 2005 when he was Minister of Mahaweli Development. This symbolic and healing gesture coincided with the first year anniversary of his becoming President. While the State has the right to charge those who indulge in crimes irrespective of how long the time since the commission of the crime, it is not necessary that persons who are accused should be remanded for an indefinite period because they are alleged to have committed a crime unless they are a continuing threat to others.

There has been great controversy for the past several years over the continued detention without charge or without trial of over two hundred alleged LTTE members. They need to be either charged and subjected to the legal process, or released without further delay. These are not only political issues, but are also issues of people’s lives where there is no closure and families cannot move on. The anguish of family members of disappeared persons and those held in custody for several years has become a common sight mainly in the former conflict affected areas and elsewhere. The government needs to take meaningful steps to ensure these cases are concluded expeditiously. This would enable those long term detainees and their families, and those of missing persons, to rebuild their lives and ensure that good governance is meaningful to them.

The main complaint against the government is not its regression into the practices of the past, but its slowness in implementing its promises which would be good and beneficial to the people. However, this grievance is not specific to the north or to the Tamil people, although they are the most vocal about the failings of the government to deliver on its promises. The complaint regarding the slowness of the government is more widespread. Those who voted for the government to ensure that there would be good governance and economic prosperity from all over the country are dissatisfied with the progress that has been made so far. They see the failure of the government to take those accused of corruption and abuse of power to trial and to prison as indications of infirmity of those who may do the same in the future. The larger population whose main priority is to improve their standard of living, and get out of the poverty traps they are in, are disappointed that the government has patently failed to jump start the economy.

It is noteworthy that visiting British Minister Hugo Swire who briefed the media at the end of his three day visit to the country said that Sri Lanka will need to demonstrate its progress in addressing the issues raised by the UNHRC resolution in Geneva by June and that they were serious about the government meeting its commitments. He added that the government was making several proposals for the mechanisms to satisfy the commitments it has made, which were most likely to be reviewed and discussed with the United Nations High Commissioner for Human Rights Zeid Ra’ad al Hussein during his forthcoming visit to Sri Lanka. He said, “It will be a Sri Lankan process with an international element, but what that means remains to be discussed and seen. It is not an international system that is being imposed on Sri Lanka.” While the downplaying of the international aspect of the mechanism is going to be advantageous to the government, the fact that Sri Lanka is answerable at all to the international community on the issue of the war has the potential to be a volatile political issue within the country.

The sudden display of “Sinha le” posters and stickers in public places, private motor vehicles including buses and three wheelers, and on social media, gives the appearance of being part of an organized political campaign that seeks to exploit nationalist emotions. The term “Sinhale” was used during the early colonial period in the 16th century to represent that part of the country that remained free of colonial rule. However, today it being given the meaning of “Sinhala blood” by being broken into two parts as “Sinha le” with the second part being depicted in red. When these words are spray painted on the properties of ethnic and religious minorities it constitutes hate speech which is prohibited in international law to which Sri Lanka is signatory. This emphasizes the need for new legislation as the “Sinhale” campaign demonstrates the law is not enforced when it is infringed by politicians, religious leaders or others with political influence. That is why specific laws have to be introduced so that these law breakers could be targeted.

It is necessary to be mindful of the aggressive campaign against the ethnic and religious minorities, in particular the Muslims in the period immediately prior to 2015 when the use of Sinhalese nationalism by the former government was high. In some instances it resulted in extreme violence where sections of towns were subjected to arson attacks. This campaign was led by Buddhist clergy belonging to the Bodu Bala Sena (BBS) and supported by a section of the former government, which ensured that they obtained impunity. Hate speech is speech that offends, threatens, or insults groups, based on race, color, religion, national origin, sexual orientation, disability, or other trait. However, racism and intolerance based on blood ties are not part of the Buddhist ethos. Therefore the motivating force behind the ‘Sinhale’ campaign has to be partisan politics that seeks to use narrow ethnic nationalism to its advantage.

Therefore it appears that a section of the opposition is trying to mobilize the forces of Sinhalese nationalism. The trump card that they seek to utilize is the international intervention that has come in the form of the resolution of the UN Human Rights Council to cast its shadow over the war victory which the majority of people rejoice in for having freed the country from protracted war and terrorism. However, despite the complaints against the government for its slowness, and the efforts by a section of the opposition to mobilize ethnic nationalism and hate speech, the government’s hold on power remains secure as the opposition to it has neither the numbers in Parliament nor credibility with the general population due to their own poor and unsavory track record of corruption and abuse of power when they were in government. So long as the UNP led by Prime Minister Wickremesinghe and the SLFP led by President Sirisena continue to work together in the National Unity Government, the opposition is unlikely to pose a threat to them.