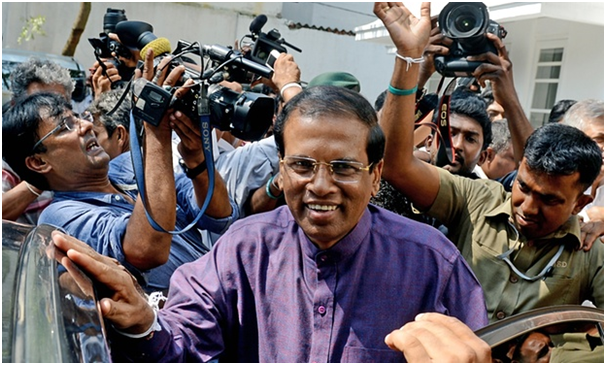 A high level delegation of EU officials was in Sri Lanka last week to have meetings with a cross section of society prior to engaging in discussions with their counterparts in the Sri Lankan government. When they met with civil society representatives they said that this was the first joint meeting on issues of human rights with the government and saw this as a positive breakthrough. They also said that they had come to see what had been delivered by the government in terms of the promises it had made. The media release that they issued after a joint EU-Sri Lanka Working Group on Governance, Rule of Law and Human Rights concluded its first meeting in Colombo on 21 January 2016 stated that they expected the full implementation of the UN Human Rights Council resolution as a priority.

During the visit of the EU delegation to Sri Lanka, Sri Lanka’s Deputy Foreign Minister Dr. Harsha de Silva said he was confident that Sri Lanka will regain the EU’s Generalized System of Preferences plus (GSP+) facility during this year. The EU, citing Sri Lanka’s failure to meet human rights conventions relevant for benefits under the scheme, in August 2010, suspended the GSP+ tariff concession for Sri Lanka that provided tax free access to European markets for the country’s products, especially for garment exports which was Sri Lanka’s second largest foreign exchange earner next to worker remittances. This illustrates the holistic dimension of the UN Human Rights Council resolution. It is not only about accountability and war crimes. It is also a matter of employment and the development of the economy.

According to the text of the statement issued by the joint working group which has obtained considerable publicity , “Both sides recognised the full implementation of the UN Human Rights Council (HRC) resolution of October 2015 as a priority.” This has been interpreted by the opposition to mean that the government will have to cave in to international pressure and appoint foreigners to sit in judgment over Sri Lankan military commanders and their political masters. The main thrust of the opposition’s campaign amongst the general population is to instill fear that the collaboration of the government with the international community will lead to an erosion of Sri Lankan sovereignty, and that this will ultimately pave the way for the division of the country.

It is in this context that President Maithripala Sirisena appears to have taken to himself the task of reassuring the people that they do not need to fear any threat due to international intervention so long as he is there. The most controversial aspect of the UN Human Rights Council resolution on Sri Lanka is its provision for the judicial accountability mechanism to have an international component in it. The UNHRC resolution stated that it “affirms that a credible justice process should include independent judicial and prosecutorial institutions led by individuals known for integrity and impartiality; and further affirms in this regard the importance of participation in a Sri Lankan judicial mechanism, including the Special Counsel’s office, of Commonwealth and other foreign judges, defence lawyers, and authorised prosecutors and investigators.”

In a recent interview to the international media, President Sirisena has said that he will “never agree to international involvement in this matter. We have more than enough specialists, experts and knowledgeable people in our country to solve our internal issues.” The President’s statement is likely to be intended to reassure those who are opposed to international decision makers in regard to their involvement in judging the Sri Lankan military on war crimes charges. Members of the international community who have been visiting Sri Lanka recently also seem to be making allowances for these concerns. It was reported that British Foreign Office Minister Hugo Swire who visited Sri Lanka a fortnight ago had said that the mechanisms would be Sri Lankan but with the required assistance provided by the UN community, and would have to be in place before the UNHRC’s June sessions. In addition, the media release issued by the EU Joint Working Committee stated that “There was an exchange of views on ongoing consultations on the establishment of domestic reconciliation and accountability mechanisms.”

The mixed signals being received on the issue of the implementation of the UNHRC resolution is an indication that the response to it is continuing to evolve. It is not only changing on the part of the Sri Lankan government, it is also changing on the part of the international community. It is important that this evolving situation be explained to the Sri Lankan population as a basic requirement of a democratic society. The government needs to obtain the support of civil society groups to take this message to the larger population. It is often the case that politicians prefer not to take up controversial matters that might make them appear to look weak or compromising as they are afraid they will lose their electoral support. They tend to see voters as being primarily self-interested, and not interested in the concerns of those of other communities.

The government has initiated a process of public consultations on the issue of the implementation of the UNHRC resolution. It has appointed an 11 member task force from civil society which is supported by two advisory panels to provide it with expert technical advice and feedback from the general public. Those at the community level are provided with the basic information pertaining to the government’s four-fold mechanism, comprising a truth commission which is supported by a compassionate council of religious clergy, a judicial accountability mechanism, and two permanent offices dealing with reparations and with missing persons. The consultation with the general population brings out their concerns which need to be taken into account to make the transitional process more relevant to the lives of all the people.

The two consultations that I have been so far involved in have brought out two missing dimensions in the ongoing process of ensuring transitional justice. In Anuradhapura those who participated in the discussion brought in the economic aspects and were critical of policies that sought to reduce the concessions to those in the rural areas, such as through the fertilizer subsidy, while at the same time reducing the taxes to those at the higher earning levels. In Badulla, however, another dimension came into focus. This was the sense of neglect of the other ethnic and religious minorities who felt that the entirety of attention is being given the problems of the Tamils of the north and east, to their neglect. Thus, at the Badulla discussion, a representative of the Indian Tamil community said that they too needed to be beneficiaries of the transitional justice process, as they too had suffered mass violation of their human rights, which had yet to be remedied.

Representatives of the Muslim community have likewise expressed their sense of neglect and being marginalized from the discussion of the UNHRC resolution, which needs to include them too as victims of mass violation of their human rights. This is on account of both the mass expulsion they were subjected to from the north in 1990 at the hands of the LTTE, and also the numerous massacres they were subjected to in the east of the country at the hands of the LTTE for which an accountability process is necessary. At a time when they find themselves once again being targeted by Sinhalese nationalist groups such as “Sinhale” they find it dismaying to be relegated to the periphery of the discussions on transitional justice.

At the Badulla discussion there was also a representative of the Sinhalese, a Buddhist monk, who spoke of the people who lived poverty-stricken lives in Uva Wellassa where the massacres of the colonial period took place. The message from Badulla was that the transitional justice process needed to include all the Sri Lankan communities, because each one of them had been victimized in the past, and the memories continue to be living ones in need of truth, justice, healing and reparation with a guarantee of non-recurrence.