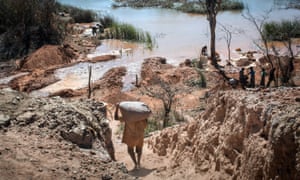 Modern-day slavery in focus is supported by:

Children as young as seven are working in perilous conditions in the Democratic Republic of the Congo to mine cobalt that ends up in smartphones, cars and computers sold to millions across the world, by household brands including Apple, Microsoft and Vodafone, according to a new investigation by Amnesty International.

The human rights group claims to have traced cobalt used in lithium batteries sold to 16 multinational brands to mines where young children and adults are being paid a dollar a day, working in life-threatening conditions and subjected to violence, extortion and intimidation.

More than half the world’s supply of cobalt comes from the DRC, with 20% of cobalt exported coming from artisanal mines in the southern part of the country. In 2012, Unicef estimated that there were 40,000 children working in all the mines across the south, many involved in mining cobalt.

In a joint-investigation with African Resources Watch (Afrewatch), an African NGO focusing on human rights in the minerals and extractive industries, Amnesty International says it interviewed 90 adults and children working in five artisanal cobalt mine sites. Workers spoke of labouring for 12 hours a day with no protective clothing, and with many experiencing significant health problems as a result.

The report says that child miners as young as seven carried back-breaking loads and worked in intense heat for between one or two dollars a day without face masks or gloves. Several children said they had been beaten by security guards employed by mining companies and forced to pay “fines” by unauthorised mines police sent by state officials to extort money and intimidate workers.

The human rights groups say they traced the supply chain from these mining sites to Congo Dongfang Mining (CDM), one of the largest mineral processors in the DRC and a wholly owned subsidiary of Chinese mineral company Zhejiang Huayou Cobalt Ltd (Huayou Cobalt). 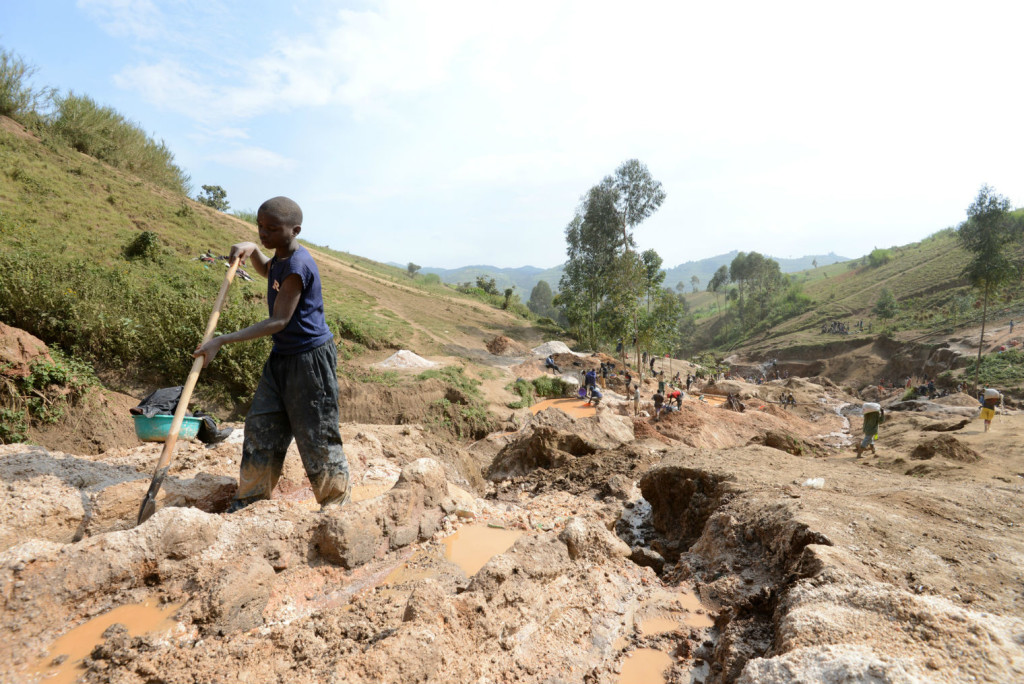 A child separates mineral from rock and sand at a mine in DR Congo (Picture: AFP/Stringer)

The report says that Huayou Cobalt sources more than 40% of its cobalt from the DRC and processes the raw mineral before selling it to battery makers, who claim to supply companies including Apple, Microsoft and Vodafone. This supply chain has not been independently verified by the Guardian.

Responding to the allegations, Huayou Cobalt told Amnesty International that “our company has not been aware that any of our legitimate suppliers has hired child labour in their mining sites or operated in unsafe working conditions … CDM has rigorously selected its ore suppliers to ensure the procurement of raw materials through legitimate channels”.

Of the 16 companies listed in the report as sourcing from battery manufacturers using processed cobalt from Huayou Cobalt, two multinational companies denied sourcing any cobalt from the DRC and five said they had no links with Huayou Cobalt. The remaining companies either accepted Amnesty’s claims or were investigating the claims.

In its response to Amnesty’s allegations, which Amnesty has published in full alongside responses from the other named companies, Apple said it was currently evaluating whether cobalt in the company’s products originated in the DRC.

“Underage labour is not tolerated in our supply chain and we are proud to have led the industry in pioneering new safeguards,” it says.

Vodafone, in its response to Amnesty, stated that the company “is unaware as to whether or not cobalt in our products originates in Katanga in the DRC … both the smelters and the mines from which the metals such as cobalt are originally sourced are several steps away from Vodafone in the supply chain”.

Amnesty International and Afrewatch claim that despite the denials by some of the named multinationals, none of those companies named could independently verify where the cobalt in their products come from.

“What is very worrying is that none of the companies that we identified through our research and named in investor documents could trace the cobalt they use in their products back to the mines where it originated. Around half of all cobalt comes from the DRC, and no company can validly claim that they are unaware of the human rights and child labour abuses linked with mineral extraction in the region,” says Mark Dummett, business and human rights researcher at Amnesty International.

He said that some of the company responses to Amnesty’s assertions were “staggering”. For example, when asked by Amnesty International whether it sourced cobalt from CDM or Huayou Cobalt, Microsoft responded by saying: “We have not traced the cobalt used through our supply chain to the smelter level due to the complexity and the resources required.”

“These are some of the biggest companies in the world, with combined profits of $125 billion and there is no excuse that companies aren’t investing some of that profit into ensuring that they can trace where the minerals they are using are coming from,” says Dummett. “Anyone with a smartphone would be appalled to think that children as young as seven carrying out back-breaking work for 12 hours a day could be involved at some point in the making of it.”

The DRC has a long history of bloody conflict fuelled by the region’s mineral wealth and the region still has an estimated $24 trillion in untapped minerals.

Global demand for cobalt is increasing, but the global cobalt market remains largely unregulated as it falls outside “conflict mineral” legislation regulating the extraction and sale of other mineral such as gold, coltan and tin from the DRC.

Amnesty and Afrewatch are using the findings of the report to call on multinational companies to conduct investigations of their supply chains for lithium-ion batteries, to check for child labour or labour abuses and to be more transparent about their suppliers.