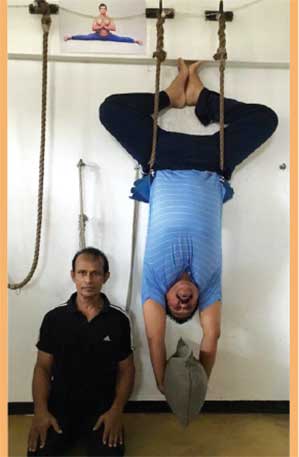 Rajapksa standing on his head!

Today this column records the true story of Mahinda Rajapaksa’s recent photograph released to the Facebook by his son Namal in which Mahinda was seen standing on his head. Namal uploaded this photograph to show that his 70-year-old father was still fit as a fiddle.

On the contrary, the common man in society viewed it in a more practical social and political perspective because it was only a few days before this photograph went viral on the social and print media, Mahinda visited the Welikada Prison to see the suspects in the Prageeth Ekneligoda murder or disappearance. Concluding that visit, Mahinda who came out from the Prison entrance told the media, “Military officers are facing the guillotine while national security was at peril”.

On receipt of that observation, the true story behind Mahinda standing on head surfaced. The first question that surfaced was: If Mahinda was standing on his feet would he have had ever made such a statement from the entrance to the Prison? That query was raised by a three- wheeler-driver, a man from the lumpen class in society. However, that query is correct. On 2 February 2010 Brigadier Keppetiwalana and 17 high ranking military officers were arrested for the murder of Lasantha Wickremetunga under Mahinda’s Presidency. They were all war heroes who gallantly fought the terrorist war at the risk of their lives. Earlier, in a manner adding insult to injury to the integrity of the military, Mahinda’s administration sent 14 senior military officers on compulsory leave alleging that they supported Sarath Fonseka at the 2010 Presidential Election. That was the first time in the Army history that such a number of high ranking military officers had been sent on compulsory leave.

For betraying nation
The Sinhala daily ‘Divaina’s ‘ Keerthi Warnakulasuriya reported that incident, on 02.02.2010, in the following manner: ’14 military officers sent on compulsory leave for betraying the nation’ – Fourteen senior military officers have been sent on compulsory leave immediately yesterday , Director General of the Centre for National Security Lakshman Hulugalle said. He said the reason was that these officers had assisted an anti-national plan. They included five Majors-General, Five Brigadiers, a Colonel, a Lt. Colonel and two Captains. Hulugalle further stated that Intelligence authorities had reported to top government officials of the conduct of these military officials last week’.

During the 1962 coup which was later popular as the case of ‘Queen vs. Liyanage’ in judicial history, a few officers of the military were sent on compulsory leave. In the case of the 14 senior military officers sent on compulsory leave by Mahinda’s administration they faced charges for acting against the Secretary to the President and the Army Commander. These officers were served letters of compulsory leave and they were identified as Majors-General D. Liyanage, Rajitha Silva, Jayanath Perera, Mahesh Senanayake and Suriyabandara; Brigadiers D.D. Dias, Keppetiwalana, Mohotti, Hannedige and Kumarapperuma; Colonel Tilak Ubhayawardene, Lt.Col. Jayasuriya and Captains Ranaweera and Krishantha.’ Altogether 37 military personnel were arrested framing bogus charges on the pretext of a conspiracy against the State. Cannot Mahinda remember that past? If so, Mahinda’s Yoga Instructor would have made Mahinda stand on his head to make Mahinda forget that past. If Mahinda is able to recollect that past he cannot make such silly statements outside the prison gates!

When Mahinda arrested military officers over the murder of Lasantha, was that a patriotic act? Then how come when the Ranil-Maithri Government arrests military personnel over the murders of Prageeth Ekneligoda and Lasantha, they should be viewed as unpatriotic acts? It is a fact that people who stand with their feet on the ground could understand the realities and those who stand on their heads would never understand the truth. Mahinda’s supporters who shed crocodile tears, when arrests are made over the murders of Prageeth and Lasantha, do it not for any love for Prageeth and Lasantha, but for the fear that more skeletons may emerge from the cupboards of Mahinda’s administration.