US Ambassador Samantha Power praised the resilience of Tamil journalists for playing a “critically important role as a check and balance of state power” and urged them to continue their work, during her trip to Jaffna today.

As part of her visit to the North, Ms Power toured the Uthayan office in Jaffna, before speaking to a group of journalists and media workers. Having heard about the repeated attacks the newspaper faced during and after the armed conflict, Ms Power said “I know that things in this area have been incredibly difficult for a very long time.”

“But imagine how much worse it would have been if it were not for this paper and the fact that soldiers and government officials had to think to themselves “maybe they’ll report on it”,” continued the ambassador. “We will never know what this area would have looked like without you all having the courage to come to work every day.”

Earlier in the day, Ms Power and the US Ambassador to Sri Lanka Atul Keshap also met with members of the Jaffna Press Club, with Mr Keshap stating “a free press is the guardian of democracy and human rights”. 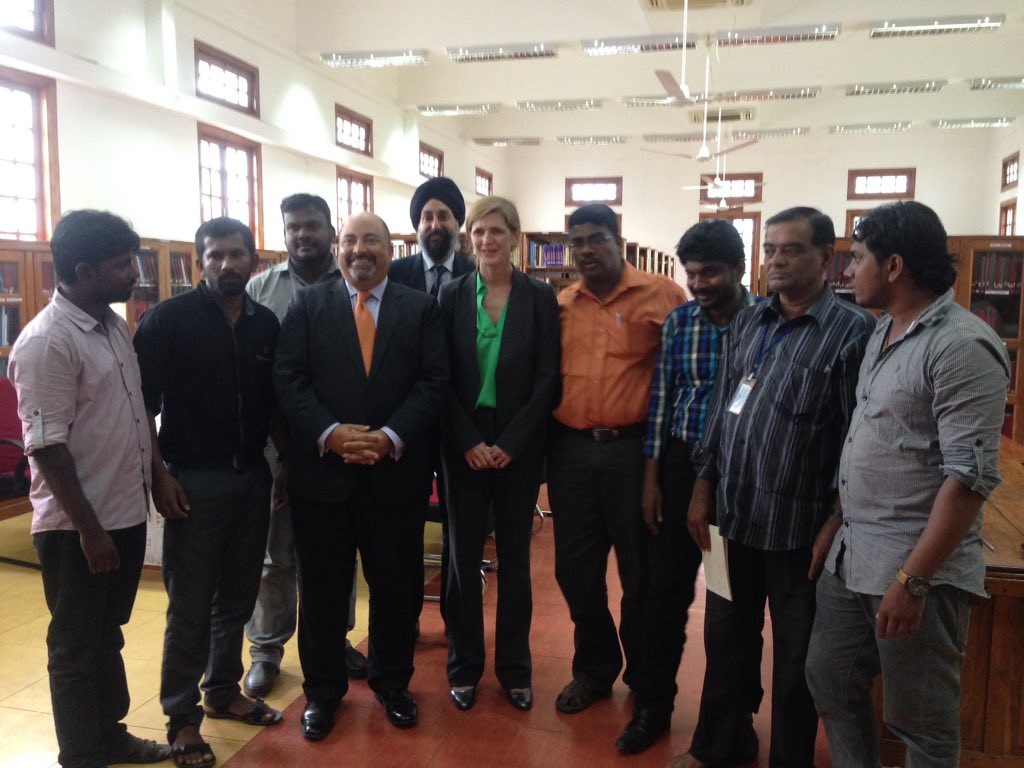 Visiting the office of the Uthayan, which still bears bullet holes left from repeated attacks, Ms Power urged media workers of the North to continue their work in publishing stories that critique the Sri Lankan government.

“Every one of you who has any role in putting this paper out day after day after day is playing a critically important role as a check and balance of state power,” she said. “And if there is to be more change in this country it will be because you keep holding government accountable.”

The ambassador recalled her own experience as a journalist covering the Yugoslav Wars, telling the group, “as one who used to be in your job, criticising government and describing things I didn’t like now that I am on the other side getting criticised – it’s so important”. “You learn so much from people outside who are connected with their communities,” she said. “You all know things that government officials who work in big offices that are removed from the people can’t know sometimes.”

Praising their courage, the ambassador told the media workers, “You puncture the bubble and you stand up for the rights of your people.” “Unlike journalism in my country which is hard but not dangerous – you risk your lives to do so.”

Journalists on the island continue to face significant dangers with the Committee to Protect Journalists (CPJ) ranking Sri Lanka 6th in its 2015 Global Impunity Index, which “spotlights countries where journalists are slain and the killers go free”, just last month.

Tamil media workers in particular continue to face the threat of harassment from the Sri Lankan state. The editor of the Uthayan stated earlier this year that his journalists were not being allowed to do their jobs by Sri Lankan security forces, following the arrest of a journalist for the coverage of a sexual assault on a Jaffna school girl by Sri Lankan police officers.

Ms Power heard these stories first hand. Pointing to a media worker who had been assaulted, she acknowledged the threats faced, “as this man’s body attests, because he bears the evidence of the sacrifices you all make for the good of your people”.

“I have nothing but the greatest admiration and I extend that admiration on behalf of President Obama,” said Ms Power.

“Thank you for doing what you do.”