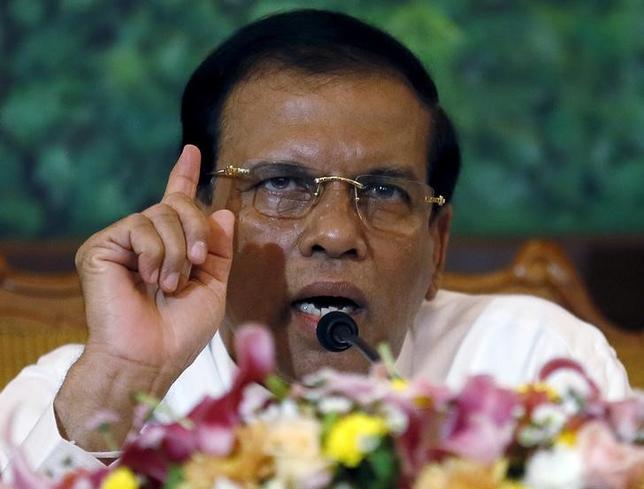 Sri Lanka’s President Maithripala Sirisena speaks to the media during a news conference after attending the United Nations General Assembly at the U.N. Headquarters, in Colombo, October 2, 2015. Reuters/Dinuka Liyanawatte/Files

COLOMBO (Thomson Reuters Foundation) – The United States has praised Sri Lanka’s new government for speeding up efforts towards reconciliation with ethnic minority Tamils after a separatist civil war which lasted nearly three decades and killed tens of thousands of people.

Steps such as the return of land, efforts to find the missing and the lifting of bans on Tamil groups will help heal wounds that linger six years after conflict ended, said Samantha Power, U.S. Permanent Representative to the United Nations.

“A lot has been done in a short period of time,” Power told the Thomson Reuters Foundation on Monday on the sidelines of a youth conference during a visit to the Indian Ocean island.

“The government has laid down a list of commitments and … (is) making their way through those commitments, in terms of giving back lands, in terms of Prevention of Terrorism Act, in terms of missing people, implementation of the accountability mechanism.”

Since President Maithripala Sirisena was elected in January, he has tried to mend relations with the United States and other Western nations, strained under his predecessor Mahinda Rajapaksa who was criticised for not doing enough to promote reconciliation between Tamils and the majority Sinhalese.

Rajapaksa won the 26-year war by crushing separatist Tamil Tiger rebels in 2009, but the United Nations accused his military of killing thousands of civilians, mostly Tamil, during the final weeks of the conflict.

He rejected international calls for an independent investigation into alleged war crimes and refused to cooperate with U.N. officials appointed to probe claims of human rights abuses including abduction, rape and torture.

Sirisena has also taken other steps for peace and reconciliation in the multi-ethnic island nation of 21 million.

Over the weekend, Colombo lifted a ban imposed by Rajapaksa on eight Tamil organisations and 267 individuals who were accused of being a threat to national security for demanding a separate nation for Tamils.

The Foreign Ministry said the ban was removed after many groups and people, based in countries such as the United Kingdom and Canada, made public statements expressing their commitment to a united, undivided country.

The lifting of the ban means they can freely enter Sri Lanka and transfer money in and out of the country. Eight other groups and 157 people, however, remain blacklisted and their assets frozen.

Sirisena has taken other steps towards reconciliation. Earlier this month, he allowed 30 suspected former Tamil rebels, who have been in prison for years accused of abetting terrorism, to be released on bail.

The government has also returned thousands of acres of land confiscated during the war by the military in the island’s east and north and has made public all government reports on war abuses to ensure transparency and accountability.

The United Nations says much more needs to be done. An expert panel which visited Sri Lanka last week urged authorities to investigate the thousands of reports of people who went missing during the civil war.

Some Tamil groups have also complained about the slow pace of reconciliation, including the failure to withdraw significant numbers of military from the Tamil-dominated former war zone.