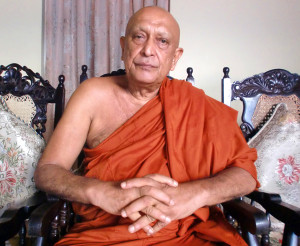 George Orwell once reminded us that ‘in a time of universal deceit, telling the truth is a revolutionary act.’ That powerful injunction came immediately to mind even as the flames dimmed this Thursday over the funeral pyre of Sri Lanka’s inimitable ‘truth teller’, the Most Ven Maduluwawe Sobitha who led the ‘yahapalanaya’ (good governance) upsurge this year.

As the South mourned its radical monk, the North and East shuddered to a near total shutdown over the Government’s release of a mere fraction of Tamil prisoners long held under anti-terrorism laws without charges or trial. In both respects, this encapsulated continuing deep strains in Sri Lanka, post-January 2015.

Posing scathing questions
So in that same stubborn spirit of truth-telling, let us forsake the pieties and the hypocritical eulogizing for the moment. The fact remains that in recent months, the Ven Sobitha seemed indignant in regard to the performance of the administration which he helped install.

Speaking to state television two months ago, he condemned the proliferation of cabinet portfolios and the entry of defeated candidates through the National List. What is the point, he asked, of having a National Government including defeated politicians when we still do not have national policies on education, health and water, to name a few? The disquiet was unequivocal. Were such a large number of portfolios awarded purely to divide the electoral spoils? This is not a National Government, he said. That is just a myth.

This outspokenness was Ven Sobitha’s singular marker, distinguishing him from clergymen of his own as well as other faiths. The Sangha and highest dignitaries of Sri Lanka’s multi-religious communities were present in full force on Thursday. This testified both to the respect in which he was held and the legitimacy of the reform process which he spearheaded. Yet he alone stood against authoritarian rule for much of the past decade notwithstanding isolation within his own community. This courage poses illustrative lessons for the clergy as well as the laity.

Singularity of his critique
First, the critique that he made was devoid of party politics, making his moral authority to do so difficult to challenge. Second, his assessments were made almost instantaneously. He was impatient of complex explanations and pleas to ‘wait awhile’ when essential reforms were delayed. It was, in fact, endearing to see a Buddhist monk of seniority and repute arguing passionately for a Right to Information (RTI) Act. This Act is still pending. Third, his reaching out to Sri Lankans of other faiths and ethnicities transformed this former nationalist monk to a social reformer of great charisma and appeal.

If Ven Sobitha was alive today, doubtless his apprehensions would have deepened. Apart from burgeoning Cabinet portfolios, uncouth antics took place this week with one ministerial worthy (Justice) calling the other (Health) a ‘goda perakadoruwa’ and vice versa. This pithy Sinhala term defies exact translation. At best, it may be expressed as an insulting reference to an imposter who dons a lawyer’s coat. The exchange took place over the issuing of Presidential directives returning the functions of the notorious Avant Garde maritime security company to the Sri Lanka Navy.

Ironically, the one point on which both agreed was the virtue of former Defence Ministry Secretary and former President Mahinda Rajapaksa’s brother, Gotabhaya Rajapaksa. In particular, the Justice Minister’s repeated claim that he intervened to stop the arrest of Rajapaksa offends the precise remit of a ministerial functionary. The Minister should perhaps apprise himself of relevant legal principles by reading the classic textbooks on administrative law. Predictably, this outrageous claim has led to calls for his resignation.

Not ‘knowing the law’
Indeed, it is not only one Minister or two who seems to ‘not know the law’ but the entire Cabinet, given its sorry handling of corruption inquiries. Similarly, the injustice of keeping detainees under draconian anti-terrorism laws without charging them should have preoccupied this Government much earlier. But this was not the case. And a more ludicrous example than this week’s bungled release (eventually) on bail of some detainees would be hard to find.

Yet the fault is not only in our politicians. Those involved in the shoddy exercise of the 1972 Constitution which subordinated the judiciary to political control, extol its virtues. But it is this atrociously miscalled ‘autochthonous’ (home-grown) Constitution, birthed by misguided socialists, which set us on the road to the final excesses of the 1978 Constitution. Convenient amnesia in this regard is unacceptable.

Equally, those disposed to look kindly on former President Chandrika Kumaratunga ignore the political controversies enveloping the Supreme Court under her watch as documented by the International Bar Association and the International Commission of Jurists. Instead only the infamies of the JR Jayawardene or the Mahinda Rajapaksa era are dwelt on. Such selective treatment bypasses the systemic crisis that we face and minimizes the complex response that it demands.

Time for pledges is now over
Even more so, Attorney Generals turned Ministers and retired Attorney Generals should refrain from referring to the repute and integrity of Sri Lanka’s legal institutions as if they were living on planet Pluto. There is no point in talking of the lineage of the Attorney General as former Law and Order Minister Thilak Marapana did on the floor of the House last week or indeed in holding forth about his legal prowess (misconceived or otherwise) as the Justice Minister did.

The public now looks with suspicion at the law, the legal system and those who propound arrogantly on the same. This is with good reason, given the perversion of the judicial institution in which process, many ‘honourable’ gentlemen and gentlewomen played a part to greater or lesser measure..

In sum, ten months after the January 2015 victory, we have clawed ourselves onto a ledge just above the Rajapaksa nadir. This week’s resignation of the Law and Order Minister was one example. But even as we dismiss the delighted crowing of Rajapaksa acolytes glimpsing blood in the water, such minimal change does not suffice. Ven Sobitha called for broad ranging democratic reforms. What we see however are miserable trickles of a warped reform process. Notwithstanding President Sirisena’s pledge over Thursday’s funeral pyre that the Executive Presidency will be abolished, the time for seemingly sincere pledges is now over.

That much is very clear.