“It is no better for a nation than for a single man to gain the whole world if it loses its soul.; and they also forget that they are sacrificing not just themselves for their patriotism (or what they think is patriotism) but also their country.” – Sebastian Haffner (Defying Hitler)

The extremists on both sides of the ethnic divide did their incendiary best. Their intent was provocation and given the ‘sensitivity’ of the issue, they would have been confident of instant success. The extremists up North behaved as if the very existence of the Tamil people depended on changing the name of Nagadeepa to Nainateevu. The extremists down South acted as if any such a name change would cause the immediate disintegration of Sri Lanka.

But the people, ordinary Tamils and ordinary Sinhalese, refused to take the bait. The screaming, burning, pillaging mobs Northern and Southern extremists were hoping for have failed to materialise, so far. The popular response to the ‘Nagadeepa-Nainateevu issue’ has ranged from indifference to bemusement, but never anger.

The absence of rage is due to the refusal of the UNP and the SLFP to become embroiled in this inane non-issue. History shows that mobs sprouted whenever the UNP or the SLFP used the race card. But this time both parties desisted from flame-throwing.

President Sirisena and Premier Wickremesinghe deserve some credit for this much needed display of sense and sensibility. The hybrid-government has its uses.

Interests of extremists often coincide. It was in the interests of the LTTE and Sinhala hardliners to prevent a political solution to the ethnic problem, to keep the pot of suspicion and hate boiling. On the issue of Syrian refugees, Donald Trump and the IS (Islamic State) stand on common ground. What the IS loses with the exodus of Syrians is immeasurably greater than what it would gain by getting a few of its operatives into Europe and America, disguised as refugees. The IS offered people their very own Caliphate and ordinary Muslims in their millions responded by fleeing the Caliphate. When the choice is between Raqqa (the self-styled capital of the new Caliphate) and Paris, Paris wins every time. Given an option, ordinary people prefer places where they can lead their ordinary lives in peace. 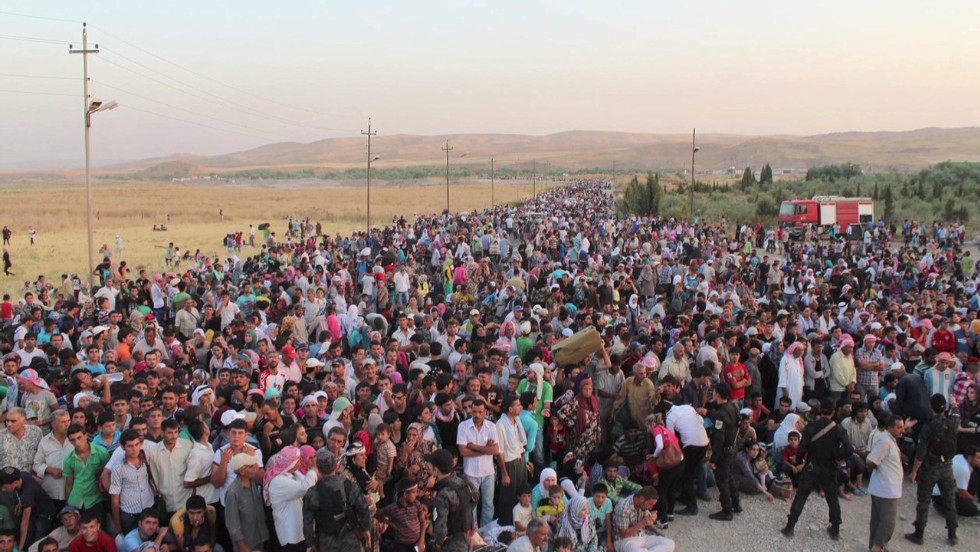 The Syrian exodus is not just a severe loss of face for the IS. Far more pertinently, it is loss of invaluable human material, without which no war can be sustained, let alone won. If instead of fleeing, the Syrians in their millions decided to support the Caliphate, to become its fighters, breeders and human-shields, the task of defeating the IS would have become difficult to the point of impossibility.

That was what happened with the LTTE. The Tigers had money and weapons, but they lacked soldiers. Like ordinary Syrians, ordinary Tamils too voted with their feet. Had those Tamils who demonstrated in European cities in 2009 stayed back in Sri Lanka and fought for the LTTE, the Tigers may not have suffered such a comprehensive, annihilating defeat.

Extremism is not an inborn trait of ordinary people. Their natural instinct is to live and let live, because in any conflict, they are the main sufferers. Outbursts of extremism always have a pre-history consisting of years of patient hard work by political parties/organisations seeking to craft a path to power through rage and hate. And such incendiary efforts are more likely to succeed in times of economic hardships, times when present is devoid of relief and future devoid of hope.

Economics was the Achilles Heel of the Rajapaksas and nowhere is this failure more evident than in Hambantota. Under Rajapaksa rule, the district got a port, an airport, a convention hall, an international cricket stadium, a botanical garden, a TV/film studio, a six-lane road and an artificial island. But the people didn’t get jobs, houses or even clean drinking water; small country roads remained in a state of disrepair and poverty continued to be rampant.

A tragedy which happened to a family in Tangalle in November 2015 is symbolic of this Rajapaksa developmental failure. A seven year old boy in Ranna, Tangalle died after complaining of stomach pain. The delay in getting him to a hospital may have contributed to his death. And the delay was caused by the fact that the parents had to carry him more than one kilometre on a rural road in a state of severe disrepair. Even the boy’s funeral became a problem because the family’s wattle-and-daub hut was so miniscule. The family had been promised Rs.100,000 by the previous government to build a new house, but received only Rs. 30,000. The father is a radio mechanic but cannot earn enough in the economically depressed community. The mother is unemployed.

All this is in the Rajapaksa heartland, the area which supposedly experienced rapid and record development in the last nine years.

Finally, families like these are faced with a choice – beggary or going abroad as migrant labourers. 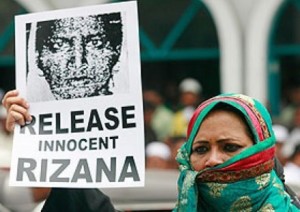 Rizana Nakeek, the first Lankan woman to be beheaded in Saudi Arabia came from a similar economic background. She lied about her age and migrated, because there was no other way to feed her family. Currently there is another Lankan woman on death row in Saudi Arabia, a migrant worker from Maradana who has been convicted of adultery and sentenced to be stoned to death. The government has promised to do whatever it can to save the woman’s life.

Unfortunately Saudi’s have an abysmal record when it comes to responding to international humanitarian pressure. A concerted international campaign has failed to save Raif Badawi, a Saudi blogger, who had been sentenced to 10 years of imprisonment and 1,000 lashes. Another international campaign is being waged to save the life of Palestinian poet, Ashraf Fayadh who had been sentenced to death by a Saudi court, but so far authorities have not relented. Though every effort must be made to save the life of the Lankan migrant worker, the chances of success are rather slim.

The case of Rizana Nafeek and of the unnamed woman from Maradana shed a disconcerting light on the reality of Lankan development. Despite all the fancy infrastructural projects, the Lankan economy will collapse if deprived of the earnings from our migrant workers. That is why the Rajapaksa government did not ban any more Lankans from going to Saudi Arabia as unskilled workers (especially domestic workers), even after the Rizana Nafeek tragedy.

Now the ball is in the court of the Sirisena-Wickremesinghe administration. Will it do what the Rajapaksas didn’t and ban any more economic migration to Saudi Arabia? Not doing so would be irresponsible and dangerous. The next time a Sinhala-Buddhist woman is sentenced to death in the obscurantist kingdom, Sri Lanka might be in the throes of a severe economic crisis. In such a context, ordinary Sinhalese might be responsive to attempts by the likes of BBS to use the death sentence in Saudi Arabia to incite hatred against Lankan Muslims.

In his Budget speech, the Finance Minister acknowledged the existence of three interrelated problems which, if left unattended, can destroy whatever good that has been achieved since January 2015: a looming debt trap; a youth unemployment rate bordering on 20%; and 20% of populace subsisting on less than two US dollars a day (around Rs. 280).

These are politico-economic landmines which can make Sri Lanka’s future as bloody as her past.

A de jure breakup of the SLFP is unavoidable and is likely to happen before the upcoming Local Government elections. The pro-Rajapaksa breakaway group is bound to embrace racist and religious extremism as its main banner. This new Sinhala-Buddhist nationalist entity will turn to unemployed young people for foot-soldiers and people subsisting on less than two dollars for supporters/voters.

If the government keeps some of its economic promises, neither foot-soldiers nor voters will be available in sufficient numbers and the SLFP breakaway group will dwindle into politico-electoral irrelevance. But if the Sirisena-Wickremesinghe administration fails to deliver on its economic promises, if it succumbs to signature Rajapaksa evils such as massive corruption and limitless nepotism, the politico-psychological landscape of the country can change in favour of extremism. In the context of such a pendulum-swing towards insanity and intolerance, issues such as Nagadeepa or the execution of a Lankan woman in Saudi Arabia can precipitate racial-religious blood-letting.

The Rajapaksa Way vs. the Sobhita Way

In his speech to celebrate the 50th anniversary of the Selma and Montgomery marches, President Obama called the US a work-in-progress and identified the demonstrations as “a clash of wills, a contest to determine the true meaning of America.”i The nature of a country is not cast in stone; it is something which changes constantly. In this sense, every country is a work-in-progress and this is true for Sri Lanka as well.

There was a growing gap between the grandiose promises the Rajapaksas made to the Sinhala-Buddhist majority and the living reality of the Sinhala-Buddhist majority. Instead of the promised land of prosperity, ordinary Sinhalese were caught in an economic reality characterised by rising costs of living, falling quality of life, growing income gaps and absent jobs. Fear and suspicion of the ‘Other’ was the cover used by the Rajapaksas to conceal this widening chasm between rhetoric and reality. From Tiger resurgence to Muslim expansionism, the ‘threat’ varied, but there was always a threat, a danger and an enemy, something to make ordinary Sinhalese forget their real problems.

In his statement on the death of Ven. Maduluwawe Sobhita Thero, former President Mahinda Rajapaksa made pointed references to their shared past, including their presence at the Pettah rally against the Indo-Lanka Accord. Ven. Sobhita Thero was once a leading exponent of Sinhala-Buddhist extremism and a tireless campaigner against any attempt at reaching a political solution to the ethnic problem. Mahinda Rajapaksa still wallows in that same racist mire, but Ven. Sobhita Thero escaped it almost two decades ago. And in the last years of his life he stood with rock-like steadfastness against extremism of every variety and for an undivided Sri Lanka which belonged to all her people. During a time characterised by despair, he was a beacon of hope not only to the Sinhalese but also to Tamils and Muslims.

Rajapaksa in the old racist mire

Ven. Sobhita Thero changed but Mahinda Rajapaksa is still wallowing in the same racist mire, still hoping that extremist fires can help him regain everything he lost. Fortunately the Sinhala-Buddhist majority, like ordinary Tamils and ordinary Muslims, still have faith in the new government.

The performance of the Sirisena-Wickremesinghe administration leaves much to be desired, but as President Premadasa once observed, the expectations of ordinary Lankans are modest; they don’t mind others going about in cars, so long as they have at least a bicycle. It’s when governments fail to ensure that necessary minimum to the people at the bottom of the economic totem-pole, an environment conducive to extremism develops. It happened during the second term of the JR Jayewardene government. It could have happened in 2014, but didn’t. Ven. Sobhita Thero played a leading role in guiding the oppositional forces away from extremism and along the path of tolerance and sanity.

Given a choice between the Rajapaksa way and the Sobhita way, a majority of Lankans opted for the latter. And the Rajapaksas who planned on creating a brand new political dynasty found themselves out of power in just under a decade.

Almost 11 months later, that mood of tolerance and sanity remains, and a majority of Lankans continue in their rejection of the Rajapaksa way and their endorsement of the Sobhita way. But this is not an immutable condition; it is something which needs to be nurtured and protected. The struggle for the soul of Sri Lanka – like the struggle for the soul of any nation – is a continuous unending one. It is a struggle which forces of sanity and reason must keep on winning. Failure is not an option, because the past is not a place we can afford to return to.