ECONOMYNEXT – Sri Lanka’s main business lobby, the Ceylon Chamber of Commerce, has urged the government to improve tax revenues and public sector efficiency in cutting the budget deficit and not trim public investments in social infrastructure.

It said welcomed the economic policy statement made by Prime Minister Ranil Wickremesinghe delivered in Parliament on November 5, saying it “provides important direction on the government’s future plans for the Sri Lankan economy.”

Wickremesinghe’s statement provided the private sector the clarity if was seeking clarity on the government’s economic policy agenda, a statement said.

Large and persistent budget deficits have continued to be a source of macroeconomic instability in Sri Lanka for many decades, the Chamber said, welcoming moves to bring down the budget deficit to 3.5 percent by 2020.

“Tackling this must come from both revenue and expenditure sides. This will no doubt be a challenge, given that the tax to GDP ratio is currently around 10 percent,” it said.

“The Chamber also cautions against compromising on important public investments in social infrastructure in the effort to substantially cut the deficit.

“The focus should be on ensuring efficiency of public spending and raising tax revenues in a way that does not hurt growth as well as equity.”

The Ceylon Chamber of Commerce also said indication that the Super Gains Tax, and similar retrospective and business un-friendly taxes, will not continue in the future is encouraging.

“ . . . such taxes hurt entrepreneurship and provide a negative signal to investors.”

The Ceylon Chamber of Commerce also welcomed changes to the export policy and promotion regime, including the creation of a new International Trade Agency.

“This will be critical in aggressively pushing Sri Lankan exports into current and new markets abroad,” it said.

“Sri Lanka has not had a robust and comprehensive trade policy strategy for some time now, while many other competitor countries have.” 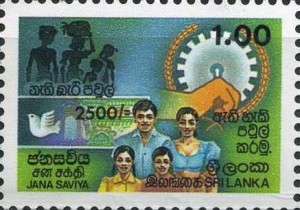 Janasaviya under Premadasa was one of the major social welfare programme

The Chamber also welcomed moves to manage the ETF and EPF state pension funds independently from the Central Bank.

“This is an important step towards better governance of people’s pensions and ensuring higher returns to their retirement savings,” it said.

Other reforms to modernize labour legislation must also be simultaneously pursued, to cater to the emerging needs of enterprises and workers, the statement said.

It also welcomed the focus on small entrepreneurs and regional economic development as there still remains significant gaps in prosperity between leading and lagging regions. (Colombo/November 09 2015) /ENS