What do you think on the progress the Government has made so far?
A: The country’s civil society was instrumental in changing the Executive on 8, January and the Parliament on 17, August. The Leader of the National Movement for Social Justice Venerable Maduluwawe Sobhitha Thera was pivotal in this. He is no more. Civil Movements along with political parties supported this issue. They backed this issue with the hope of bringing in political reforms. Some were fulfilled at a very minimum level. Some we could not fulfill. Regarding this, even the late Sobhitha Thera was in a state of disillusion. We too are to a certain extent disappointed. The 19th Amendment to the Constitution was brought in order to curtail the powers of the Executive President system. To a certain extent we were able to achieve this yet, not to the expected degree. Independent Commissions were established, but in the Constitutional Council, the Opposition worked towards reducing the numbers of those from the civil society in the composition. There is something positive in the fact that some political reforms took place.

On the other hand, there is much left for us to do. One is to pass the National Audit Act. The other is to pass the Right to Information Act. We expect a change in the electoral system. A draft Bill was put forward in this regard, yet it did not come to the fore. We need a programme in place to establish the independence of the judiciary. Such a lot of reforms are there to be achieved in the time to come.

It was in this context that following a Parliamentary Election a hybrid government was formed, and certain corrupt groups come into the government. The legislature today is composed of thieves. There are corrupt Ministers in the incumbent Government. This still prevails as a big issue. Their conduct is not suitable for the society and the nation’s future. Already these matters are being reported in the news. There is also a trend where, when one public servant engages in corruption and it is exposed by us, he is transferred to another separate entity of the State. There are many such issues. Regardless both President Maithripala Sirisena and Prime Minister Ranil Wickremesinghe have a positive outlook towards seeing through political reforms and to take the country forward. We also believe that we must all operate within this context. 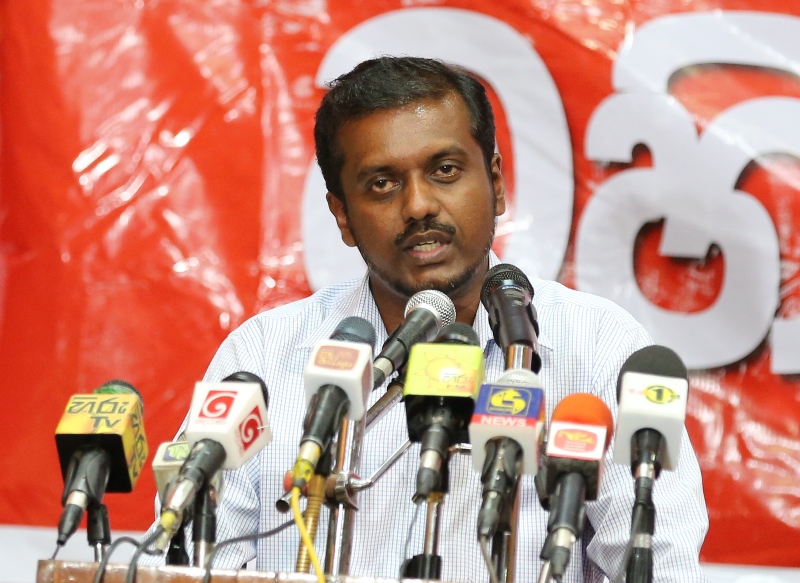 What are your thoughts on the Budget?
A: Prime Minister Ranil Wickremesinghe made an initial statement regarding this. The Budget is presently being prepared. From the Budget, we expect to know as the citizens of this country, how we intend to move forward. More allocations for the country’s development and public services like health, education and transportation are expected by the people. The business sector must be developed. Welfare facilities must be increased. For the working class, we want the allowances which were increased to be added to the basic salary. The discrepancies between the salaries must be maintained at the correct level. There is however, a crisis. Our proposals were considered for the Budget. Yet, the Ministry of Finance did not hold a discussion with the key groups from the specific sectors.

This remains as a very big crisis. Today, we hear that erroneous policies and proposals are being prepared with regards to the aforementioned addition of the allowances to the basic salaries and the salary gaps being maintained at the proper levels.

We have informed Prime Minister Ranil Wickremesinghe, President Maithripala Sirisena, Minister of Finance Ravi Karunanayake and the Minister of Public Administration about this situation. We must also state that, if a major injustice takes place, we have no other option other than to go for a massive and severe strike. No matter what policy the State adopts, it must establish a mechanism to discuss the matters in prior with the relevant stakeholders. A few in the Government cannot arbitrarily decide on such concerns at their whim and fancy. If this happens, the Government will not be able to move forward.

Are you satisfied on the investigations into fraud and corruption?
A: No. We cannot in any way be satisfied with the progress regarding fraud and corruption. However, the Government and the Executive have done certain things to reveal these corruptions. In relation to this, several of the previous heads like former MP Sajin Vass Gunawardena and former President’s Secretary Lalith Weeratunga have been remanded and investigations are being continued against them.

These investigations too have not been done lawfully. For an example, in the ‘Sil Redhi’ case, it involves a crime to which bail cannot be granted. The crime is the misappropriation of State and therefore public funds. Yet, Weeratunga and the former Director General of the Telecommunications Regulatory Commission of Sri Lanka (TRCSL) Anusha Palpita are given bail. The Attorney General’s (AG) Department is responsible for this.

This case should have come before a Magistrate’s Court. Yet it went before a High Court. Even the female High Court Judge queries as to why this was brought before the High Court and orders that the case should be taken before a Magistrate’s Court. The Magistrate summons the Police and queries why this was done. The Police Officer-in-Charge in question apologizes to the Magistrate. When such things happen, the fight to reveal fraud and corruption becomes problematic. This is not Yahapalanaya (‘Good Governance’). This is neither the rule of law. There cannot be one law for one person and another for a different person. If Weeratunga is being released there is no point in imprisoning Gunawardena. This must be changed. If this is the case, there is no need to remand anyone for six months. Might as well, allow them to roam free. If Gunawardena was remanded, so too must be Weeratunga. We expect the law to be fair for all when it comes to the question of exposing thieves and the corrupt. Certain former Ministers’ wives have been charged with crimes, yet the law is not being implemented against them. The main groups in the country have turned the rule of law into the law of the jungle. Such is the situation with the case regarding the Avant Garde case. This is the rape of the rule of law. Former Defence Secretary Gotabhaya Rajapaksa is one such person. He is directly involved in the Avant Garde case.

It was recommended that cases be directly filed against five persons. The AG unheeded this and stated that there were no provisions to file criminal cases. This is what the AG reported to the Magistrate. This constitutes the rape of the rule of law. We ask that the AG also should resign. There is no point in former Minister of Law and Order Tilak Marapana resigning. Minister of Justice Dr. Wijeyadasa Rajapakshe made undue influence to the AG and the Navy officers.

He says he intervened to prevent the arrest of Gotabhaya Rajapaksa. This is a matter involving the AG and the Police. He cannot intervene in the enforcement of the law. He can only take policy decisions and if a blunder occurs to correct it in a lawful manner within the provisions of the law. What he has done is wrong, and if such persons continue to be in the Cabinet we do not think that investigations into cases like the Avant Garde, can be performed impartially. Dr. Rajapakshe too must resign. If there are other Ministers and parties who profited from this, they too must be removed. Otherwise the government cannot move forward. This Government was brought into power after immense sacrifices on the part of the people. Some sacrificed their lives against the regime of former President Mahinda Rajapaksa.

Even President Maithripala Sirisena had said that if he lost the election he would have been six feet under. Thus, it is clear even what he is saying. This means that he would have been killed had he lost along with the other Civil Society Activists and others who helped Sirisena. Therefore, we cannot allow this government to be destroyed because of two or three individuals. The Avant Garde case investigations must continue properly and those who should be arrested should be arrested. If the Ministers’ who are involved in this case are not going to resign, they should be removed. This is our demand from President Sirisena and Prime Minister Wickremesinghe. The Government did not succeed in fulfilling the vision of late Sobhitha Thera. President Sirisena made a promise on the Thera’s cremation day. This is good. These social changes must be done quickly.

“EPF & ETF funds must be safe and they will be protected if they are under the Treasury. Ravi Karunanayake and Ranil Wickremesinghe’s whims and fancies cannot be catered to.”

What are your ideas about the Employees Provident Fund (EPF) and Employees Trust Fund (ETF) issue?
A: The Government has not clarified as to why they are putting forward this proposal. The Government says that it wants to bring about democracy. If this is the case they must discuss with all the relevant parties. If they want to make changes to these funds, they must discuss with the Trade Unions and the Trade Unions must approve and agree to them. Either way, we do not agree with the proposal to take these funds outside the purview of the Treasury and place them under some other individuals. We will never agree to this. These funds must be safe and they will be protected if they are under the Treasury. Ravi Karunanayake and Ranil Wickremesinghe’s whims and fancies cannot be catered to. We experienced a similar situation when Mahinda Rajapaksa brought the Pension scheme. We will definitely strike and we will definitely defeat this. We will stop work throughout the country.