HomeFeaturesSituation AnalysisBudget for Business: A Red Flag for the People – Ahilan Kadirgamar 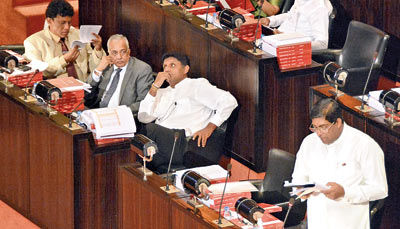 The 2016 Budget has been welcomed by the business and economic establishment. The big question is whether economic policies good for business are necessarily good for the economy and the people? To what extent are the economic policies in the 2016 Budget and the Prime Minister’s Economic Policy Statement different from the crisis-prone economic policies of the past?Economic policies in recent decades have been dominated by a neoliberal vision of transforming the economy to ensure the greater accumulation of profits by finance capital. Neoliberal capitalism does not only depend on profits through the increasing exploitation of labour in production as with intensive farming and industrial factories, but also through creating business friendly conditions for financialised speculation of people’s savings and the grabbing of their assets such as land. This budget and the economic policies it reflects are certainly business friendly and neoliberal in character. However, as with so many neoliberal economic policy packages around the world, they can also become the ground for repeated economic crises as with the Western Economic Crisis of 2008 and the Asian Economic Crisis a decade before that.

Neoliberal waves
Neoliberal economic policies are not new to Sri Lanka, one of the first countries in South Asia to liberalise its economy. The open economy policies of 1977 constituted the first wave of liberalisation in Sri Lanka. In subsequent decades, economic scholars argued that the period from 1989 to 1993 under the Premadasa Government represented the second wave of liberalisation, which was characterised by financial, trade, tax and exchange rate liberalisation. The period from 1996 to 2000 under the Kumaratunga Government carried forward the liberalisation agenda further with an emphasis on privatisation.That a major shift of economic policy occurred in 1977 is accepted across the spectrum. However, I would argue that this first wave of neoliberalism continued into subsequent decades. The conditions to embark on a second wave of neoliberalism were encountered in 2002 with the internationalised peace process and the Wickremesinghe Government in power. However, acceleration of neoliberal policies does not only depend on the regime in power, but equally, if not more, on economic conditions both nationally and globally. Between 2002 and 2004, the Wickremesinghe Government failed at a second wave of neoliberal economic transformation for the very reason that the previous regimes could not attempt it. Neither the national stability nor the conditions for the global inflow of capital existed as the country was embroiled in a protracted war.

Thus it was left to the Rajapaksa regime, in its second term after the end of the war in 2009, to launch the second wave of neoliberalism amidst authoritarian national stability and favourable global financial flows. Indeed, there are many parallels between the high growth years of the late 1970s and the period of accelerated growth starting in 2010, particularly in relation to the inflow of capital and the boom in construction. The Rajapaksa regime carried forward the ‘Regaining Sri Lanka’ policy package of the previous Wickremesinghe Government, albeit piece-meal and to suit its own political and economic priorities. Indeed, it is with this second wave of neoliberalism that we have seen tremendous financialisation as well as massive infrastructure and urban build-out. The increasing indebtedness of Sri Lanka over the last many years that has become a major topic of discussion in recent months, is not an aberration, but the very manifestation of neoliberal integration with global capital and markets.

Corruption to the fore
The question is whether there is a difference between the neoliberal push of the Rajapaksa regime and the new Government. To the extent that they both consider financialisation and urbanisation as central to economic growth, there is no difference. By the beginning of its second term in 2010, the Rajapaksa regime had consolidated an oligarchic vision with a group of actors eager to share the spoils by committing to the regime’s political and economic project. The somewhat disjointed moves lacking a forceful ideological stance on neoliberalism had to do with the Rajapaksa regime’s social base; a populist appeal to placate the rural constituencies even as the regime attempted to take financialised urbanisation full steam.

The new Wickremesinghe regime, on the other hand, is still in the process of consolidation. Whether and how, President Maithripala Sirisena and his SLFP base, will or will not be integrated with the interests of the new regime will greatly affect its consolidation. Here I use ‘regime’ with reference to those at the helm of state power with particular ideological and economic interests.

In any case, through its budget, the Wickremesinghe Government has sent a clear message to the business class, specifically finance capital. Although there is a difference in the specific actors who may benefit from the substance of the neoliberal policies favoured by the Wickremesinghe and Rajapaksa Governments, the larger class interests are essentially the same. Furthermore, the new Government is just not shy about its open embrace of business and the market.

The central theme in the contemporary phase of the second wave of neoliberalism is financialisation and urbanisation. The Rajapaksa regime ensured an IMF Standby Facility at the outset in late 2009, floated sovereign bonds, propped up the stock market, attempted a process of financial consolidation including the merging of banks and moved on the beautification of Colombo. The new Government is going to do more of the same with financialisation, including the merging of banks and the promotion of capital markets, and the massive urban transformation of the Western Province into the Megapolis. In fact, these initiatives will be augmented with labour reforms, market oriented land policies and changes to state institutions, with the assurance that these measures will be undertaken wearing cleaner shirts.

The other side to this story is the continuing abandonment of the rural sectors such as agriculture and fisheries; despite the lip service of the new Government as with the Rajapaksa regime, there is a steady decline in budgetary allocations. The Rajapaksa regime promoted pawning and leasing by banks, and thus facilitated the siphoning off of the meagre liquid assets of the rural people by finance capital. The new Government recognising the problems for banking, with increasing non-performing assets, is pushing the banks to reject pawning and leasing. However, they are creating a grander game on the speculation of land, the largest fixed assets of ordinary people, where converting their lands into marketable private lands and simultaneously promoting Real Estate Investment Trusts (REITs) that opens the door for speculation by finance capital and the eventual dispossession of people’s homes and land.

Over the last year, the public wanted to see the previous regime prosecuted for its obscene and large scale corruption, but the new Government has been slow in moving on such prosecutions. In many ways, it is the continuing attention on the excesses of the Rajapaksa Government that serve as an effective cover for the economic policies launched over the last month by the Wickremesinghe Government.

The Rajapaksa regime should have been prosecuted for corruption months ago, but the long-drawn process has been not only a relief to the previous regime but also a cover for the regime in the making. Indeed, the public was fed doses of the Avant Garde scandal even as far reaching economic policies were unveiled. It is this grand deflection through the discourse on corruption that may facilitate the dangerous neoliberal transformation with labour reforms resulting in easy hire and fire of workers, land policies that make it a resource for capital and state institutions that work for business through public private partnerships. 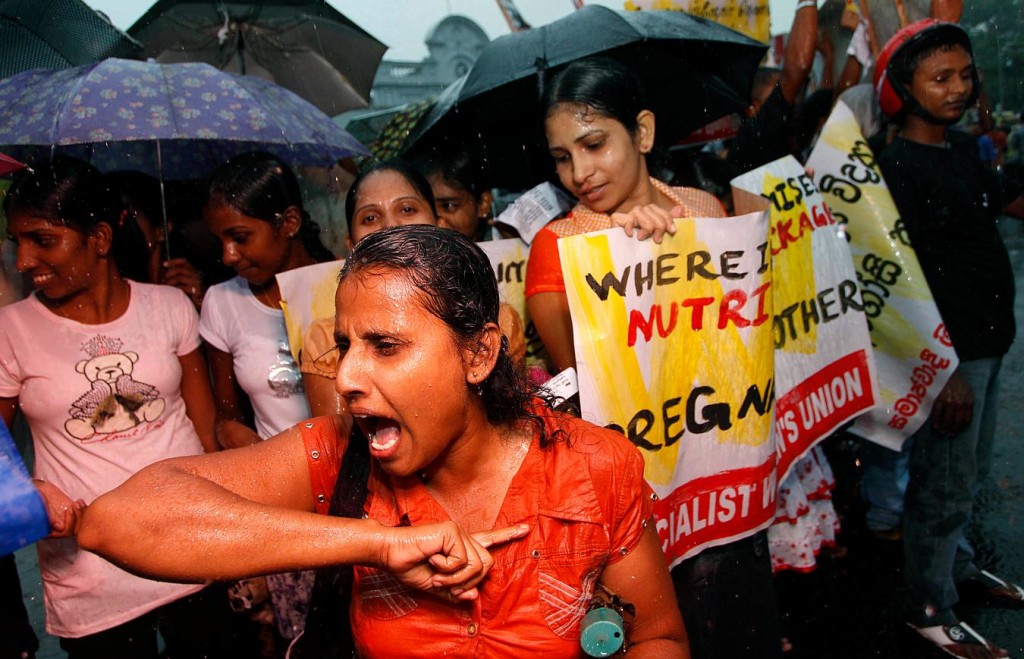 In the weeks and months ahead, not only debates on concrete issues like land, work, and social protection, but peoples’ struggles will be important to protect what they have in the face of neoliberal dispossession

Precarious future
The economic situation is not all that rosy for the Government. Five years into the second wave of neoliberalism, the conditions for crisis have matured in the country. The increasing national indebtedness, the falling foreign exchange reserves and the looming balance of payment problems are both conditions for financial crisis and also for global finance capital to abandon Sri Lanka; this is what happened with repeated financial crisis around the world including more recently in Southern Europe. In 2010, the Rajapaksa regime was fortunate to be placed in an opportune moment following the 2008 Western Economic Crisis, with a flush of capital to the “emerging markets”. Now, with the US Federal Reserve increasing interest rates, there has already been a reversal of the flow of global capital. Given the Wickremesinghe regime’s neoliberal push for national economic growth through the inflow of global finance capital absorbed in urban construction, the new Government will have to do more to make the local market inviting. This will involve dispossessing people of their assets, including land, savings and pensions, which can be channelled into the market for speculation by global finance capital.

Indeed, repeated financial crisis around the world have also opened opportunities for neoliberal transformations. These changes have been accompanied by repression and dispossession. While these dangers await the people of Sri Lanka, they are overlooked in most public commentaries on the budget and the Prime Minister’s Economic Policy Statement. Would even the provisions for greater educational investment, the only potential gain for the people in this budget, withstand the cycle of neoliberal capitalist crisis and dispossession once it is unleashed?

In the weeks and months ahead, not only debates on concrete issues like land, work, and social protection, but peoples’ struggles will be important to protect what they have in the face of neoliberal dispossession.
Sunday Times