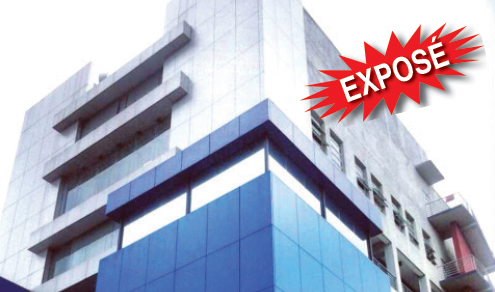 Following the expose on the two plots of lands granted for the Don Alwin Rajapaksa (D. A. Rajapaksa) Memorial Foundation by the Urban Development Authority (UDA) has been misused for personal purposes by Kurunegala District parliamentarian Mahinda Rajapaksa, his siblings and off spring, questions have been raised as to the action taken by the UDA against this foundation for violating the lease agreements.

Director Lands, UDA, H. A. Dayananda confirmed to The Sunday Leader that if the lessee (D. A. Rajapaksa Foundation) has violated the lease agreement conditions that have been imposed by the UDA, there is no other options for the UDA but to cancel the agreement forthwith and reacquire the land.

On a request made by the then Opposition Leader Mahinda Rajapaksa to the then Minister of Western Region Development M. H. Mohamed on April 5, 2003, a cabinet approval dated September 22, 2003 was granted and two plots of lands, one at No: 236/ 1, Denzil Kobbekaduwa Mawatha, Battaramulla, and the other in Gampaha for the D. A. Rajapaksa Memorial Educational, Cultural and Social Services Foundation were given on a 30 year lease agreement for an annual lease of Rs.163,125.

Although the request made by Mahinda Rajapaksa was to construct a building to house a vocational training centre and a dormitory for the inmates, neither a Vocational Training Centre, nor a dormitory had been built as promised, but instead the one piece of land was used to construct the Carlton Sports Network (CSN) office and studio and the other for a party office in Gampaha, respectively.

Rajapaksa’s letter to M. H. Mohamed states thus, ‘The D. A. Rajapaksa Foundation was founded in 1995. The primary objective of the foundation since its inception was to initiate and implement Social Development Projects for the benefit of the people.

‘The latest initiative of the foundation is to construct a suitable building structure to house a Vocational Training Centre, a Cultural Centre and a dormitory for the inmates. The D. A. Rajapaksa Foundation plans through this initiative to expand its current activities and provide training for the youth of our country.

‘In this respect I would appreciate Hon. Minister, if you would be so kind as to allocate a suitable plot of land to the D. A. Rajapaksa Foundation in the Kotte area, for the purpose of constructing a suitable building as enumerated above. Attached herewith, is a detailed report, outlining the past activities and the future plans of the Foundation for your kind perusal. Thanking you, Yours sincerely, Mahinda Rajapaksa- Leader of the Opposition’.

The Financial Crime Investigation Division (FCID) after an investigation on the controversial CSN, under the Money Laundering Act, has unearthed how the D. A. Rajapaksa Foundation has breached the agreement reached with the UDA when obtaining the state-owned land, where the CSN building is now situated.

Meanwhile, it is learnt that the FCID has initiated an investigation as to how Basil Rajapaksa had built a party office in Gampaha on the land that the UDA had given to the Rajapaksa Foundation. It is alleged that Basil Rajapaksa had spent over Rs. 200 million on the construction, but has failed to show any accounts on the project. Chief Executive Officer of the Rajapaksa Foundation, Upul Dissanayake, has said that money was given by the former Chairman, People’s Bank, W. Karunajeewa, whose daughter-in-law is one of the Directors of the CSN.

According to the UDA sources, once it is confirmed that this Foundation has violated the conditions of the agreement they entered into with the UDA, the state property would be taken back by the government.

“These state lands are not given for private businesses or for party offices but for a foundation which is an NGO. In that backdrop, what authority has the D. A. Rajapaksa Foundation to give these two pieces of land for the personal use of the Rajapaksa family?” sources said on condition of anonymity. Accusing the present UDA management, sources queried as to why the UDA is silent without cancelling the agreement if the Rajapaksa Foundation has arbitrarily violated the stipulated conditions of the lease agreement.    According to the FCID, when the D. A. Rajapaksa Foundation Chairman, MP Chamal Rajapaksa was questioned, he had stated that he is not aware of what happened to the pieces of land given to the Foundation and had stated that only his younger brother, Mahinda Rajapaksa, and Mahinda’s sons would know to give accurate details on these, as it were they who were involved in these affairs.

The FCID, meanwhile, is conducting investigations on CSN under the Money Laundering Act, and the Kaduwela Magistrate’s court had recently issued an interim order banning the sale, lease or temporary transfer of the CSN sports TV channel. The order was issued in accordance with a FCID submission under B/9823.

Meanwhile, highly reliable sources from the Sri Lanka Land Reclamation and Development Corporation (SLLRDC) on condition of anonymity, said how the then Chairman, Harshan de Silva, and General Manager, Srimathi Senadheera, approved the request made by the Deputy General Manager, Drainage and Reclamation  (DNR) S.T. Muthumala, for the Medamulana Project.

“SLFP union secretary, Samantha Lokuliyana, works under Muthumala in the DNR Division and, being strong supporters of Mahinda Rajapaksa, Muthumala, requested  the former Chairman, seeking the SLLRDC’s support for the Medamulana Project. Other than the management no one at SLLRDC knew what this Medamulana Project was. Some believed it was a land filling project in Medamulana, while some thought that it was another project. Without any hesitation the then Chairman and the General Manager who is still holding office gave their approval,” sources alleged.

Sources mentioned as to how the SLLRDC had funded the Medamulana project, under the UDA supervision. “In 2009, the SLLRDC was taken over under the Defence Ministry, in which the Defence Secretary was in charge of both the UDA, and SLLRDC. That was why the SLLRDC without any hesitation released the money for the project. This project can be considered similar to the Helping Hambantota project, where Mahinda Rajapaksa was accused to have opened a bank account, in order to build houses for the tsunami victims but the money was never utilised to construct houses, but was used for personal work,” sources further alleged. According to sources, Rs. 84.3 million had been given for the said ‘project’.

“Only a selected group, who were Rajapaksa supporters, were chosen to carry out the work of this ‘project’ leaving others in the dark. It was only later that we came to know that the SLLRDC funds, have been utilised to renovate the monuments, at the D.A. Rajapaksa and Dandina Samarasinghe Dissanayake (Mrs D.A. Rajapaksa) graveyard, which was allocated under the Weeraketiya project. These renovations had been carried out under the supervision of the UDA,” sources claimed.

According to sources, this graveyard memorial consists of ponds, an underground museum, flower railings, and a road network, to reach the grave sites.“By the time this ‘donation’ was given, the Corporation was running at a loss, and was waiting for a massive loan. Most of the officials involved in this ‘project’, are still working for the SLLRDC, and it is high time for the FCID to question them, and remove them, if they were involved in this massive scam,” sources added. When contacted, General Manager SLLRDC, Srimathi Senadheera, who is also accused of releasing funds for the ‘Weeraketiya Project’, to find out on what basis this money was released, and who made the request, Senadheera said that she cannot make any comment without the subject Minister, Patali Champika Ranawaka’s approval. “Without the Minister’s approval, I cannot  comment on this,” she said.

In 2010, I got the land and constructed this building, and paid the lease to the foundation. How can anyone say that this land was not used for the purpose it was obtained, when I have given one floor of the CSN building for the D.A. Rajapaksa Foundation, another floor to Sampath Bank, and another floor to Perera and Sons bakers?” Weliwita queried.  According to Weliwita, the CSN had obtained the land from the D.A. Rajapaksa Foundation on a lease agreement. When asked whether the Foundation informed the UDA, before going into a lease agreement with a third party, Weliwita, who is the Deputy Chairman of the Foundation, knew nothing about it.

“I am not aware of it as it was the Chief Executive Officer of the Rajapaksa Foundation, Upul Dissanayake, that signed the lease agreement on behalf of the foundation with the CSN,” he said. However, Weliwita said that although there is no fault of obtaining lands given for charity purposes for other reasons and that he can name business ventures or offices that had got their buildings constructed on lands obtained from the government, for charity purposes, he said that the new government has to stop the witch hunt against the Rajapaksas.

“I was asked to give a statement at the FCID on CSN and how we got the funds to start it. We have provided all details into these allegations but so far the FCID has failed to take any legal action against us under the money laundering Act. It was Sajin Vass Gunawardena and Nimal Perera of Pan Asia Bank, that gave us Rs.100 million and Rs.50 million respectively, for which we have documentary evidence. Instead of coming behind us, why cannot the FCID question Sajin Vass and Nimal Perera as to how they acquired such wealth for them to invest, as it is an open secret, as to how these two became billionaires during the tenure of Mahinda Rajapaksa, as the country’s President? Let the FCID take legal action first against these two under the money laundering Act,” Weliwita added.

When questioned as to who obtained the approval to construct the CSN building from the Kaduwela Urban Council- whether it was the D.A. Rajapaksa Foundation or  the CSN, Weliwita said that according to Upul Dissanayake, it was the Nawaloka Constructions that had applied for the approval. “Since the contract was given to Nawaloka Constructions, it was they who got the approval. There is no necessity for the land owner or the lessee to apply for the building approval, but the contractor can apply. Who says that the land owner or the lessee has to apply and get the approval when the local councils accept the building contractor as the owner of the property?” Weliwita said.