30 September 2015 – After years of conflict, “a new era of democracy” dawned in Sri Lanka this year, ushering in justice, freedom and equality, the country’s President told the United Nations General Assembly today, reporting that his Government supports a “fresh universal approach” that deals honestly with the past while pursuing sustainable development.

“Our new vision for the country involves achieving the twin objectives of sustainable development and reconciliation. A fundamental requirement in this context is dealing with the past honesty and building a modern Sri Lankan nation,” Maithripala Sirisena told the Assembly, explaining that, in the wake of years of conflict, his Government is now moving forward with a process of “truth seeking, justice, reparation and non-recurrence.”

Rising to 21st century challenges will require Sri Lanka to adopt a new social, economic and political approach, and, in that regard, he said that reconciliation must receive “priority attention.” Indeed, the new consensus Government he is leading has already taken several steps to introduce and operationalize the constitutional and institutional reforms required to accelerate the achievement of these goals.

Mr. Sirisena said Sri Lanka has suffered from conflict and while such turmoil could bring destruction to a society, there are also many lessons that could be learned during and after a conflict. “All forms of war and terrorism are a disgrace to humanity,” he continued, saying that the challenge of the modern era is to find ways and means to “defeat such brutality against humanity.” 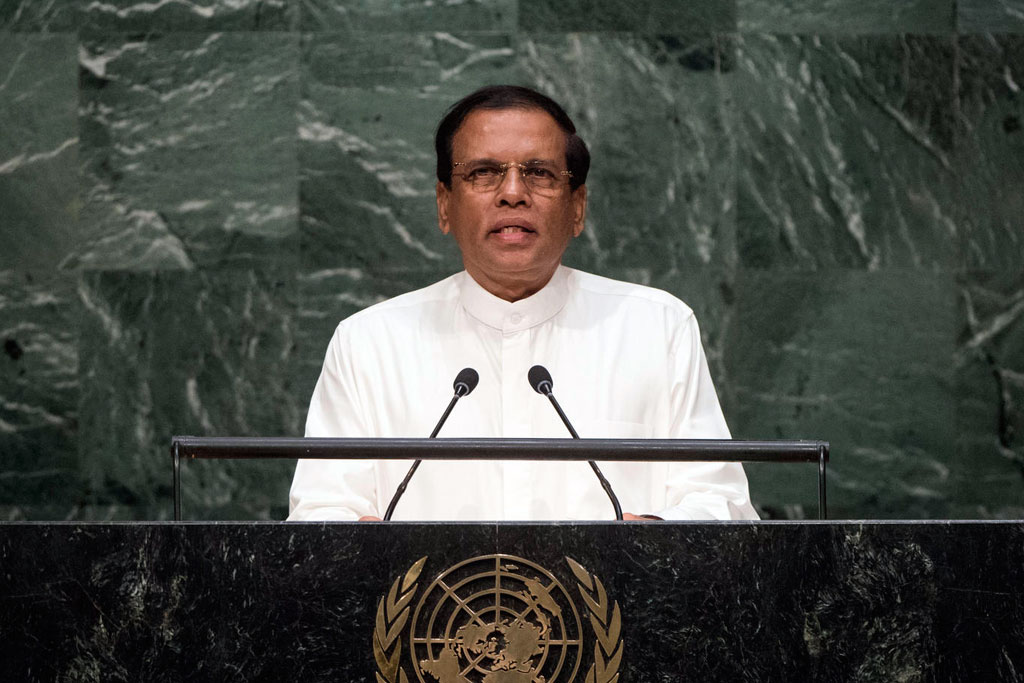 “Sri Lanka succeeded in eliminating terrorism, which continues to throttle other developing countries in many regions – from Asia and Africa to Latin America,” he said, declaring: “We defeated one of the world’s most ruthless terror outfits. Equally, our post conflict experiences also have been significant. We believe that all these experiences can be shared fruitfully with other developing countries affected by terrorism.”

Turning to the issue of sustainable development, he said to ensure broader advancement for all, it is necessary to pursue dialogue within the global South as well as between the North and South. “Development should result in the empowerment of women and youth and assure security for children. Frustration in youth usually leads to conflict,” Mr. Serisena continued, but noted that youth is the driving force for sustainable development.

“Therefore, we should transform the youth to a totally skilled workforce to succeed in the 21st century knowledge-based society. It should be a lead component of the post-2015 Sustainable Development Agenda,” underscored the President, adding that the overall aim must be to have an inclusive model of development that is capable of uplifting development standards globally.

Stressing the need for a “fresh universal approach,” he said that extremism, over-consumption, arbitrary exploitation of the environment, violation of human rights, and massive income disparities can often cause insecurity, conflict, violation of fights, and exploitation.

As such, he said that the edifice of sustainable development should be built upon the foundation of self-discipline and equity. “If this could be practiced at personal, community, national and global levels, it would mark a giant leap forward for human kind.”