The Tamil community has the least amount of faith in an exclusively domestic mechanism with only 7% in favour of one. 44.9% said it should be an exclusively international one and 35.5% said a combination of the two. 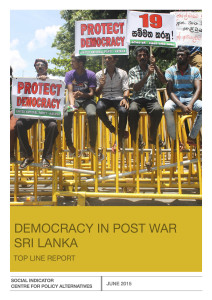 There has been an increase in the trust that Sri Lankans have for the Army, as 44.2% in 2015 stated that they have a great deal of trust in comparison to the 33.7% in 2014. The Tamil community has the least amount trust in the Army with 52% stating that they have no trust, followed by the Up Country Tamil with 47%.

When comes to the media landscape under President Sirisena’s administration, 51.7% of Sri Lankans agree (with 12.7% strongly agreeing) that the media is completely free to criticise the Government as they wish. This is a noteworthy increase when compared to the previous years – 42% in 2011, 42.5% in 2013 and 39.2% in 2014.

‘Democracy in post-war Sri Lanka’ sought to record public perspectives on democracy in Sri Lanka today and the findings are presented under four key sections – The New Government, Security and Freedom, Trust in Institutions and Media in Sri Lanka. The first wave was conducted in 2011 and the second wave in 2013 and the third in 2014.

Conducted in the 25 districts of the country, the 2015 survey captured the opinion of 1987 Sri Lankans from the four main ethnic groups. The selection of respondents was random across the country except in a few areas in the Northern Province where access was difficult. Fieldwork was conducted in March 2015.