( Jayathilaka Bandara singing at the Commemoration)

No true reconciliation without justice for victims, priest says.
As Sri Lankan Tamils mark the anniversary of the “Black July” riots, which triggered a quarter-century of civil war, activists say the lines of division still run deep through the island nation.

On July 23, 1983, fighters with the Liberation Tigers of Tamil Eelam, commonly known as the Tamil Tigers, attacked a military patrol, killing 13 soldiers. Over the next week, mobs of Sinhalese, Sri Lanka’s majority ethnic group, took revenge on Tamil civilians.

Rights groups say up to 3,000 Tamils nationwide died in the ensuing days, though previous government figures have pegged the number much lower.

Vimala Rajanayagam, a Tamil from Colombo who lost family members that week, said he witnessed mobs chasing down Tamils in the streets.

“In riots, Tamils were beaten and burned to death because of racial hatred, but still the situation has not changed much,” said Rajanayagam, who runs a clothing shop in Colombo. “Tamils still live in fear in the country.”

The violence of “Black July” effectively set off Sri Lanka’s civil war, which only ended in 2009 with the defeat of the Tamil Tigers.

Sri Lanka’s current government has pledged a new approach to reconciliation between Sinhalese and Tamils. 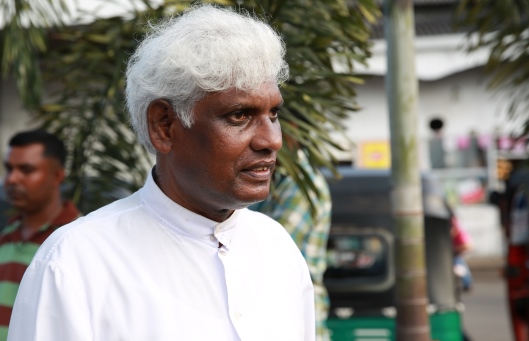 But Father M. Sakthivel, convenor of the Colombo-based Christian Solidarity Movement and a Catholic priest, believes there must be true justice before reconciliation can be achieved.

“[There is] still no justice for Tamil families. How can we believe in reconciliation for lasting peace in the country,” he told ucanews.com in an interview.

He noted that Bodu Bala Sena, an influential Sinhalese Buddhist nationalist group, plans to play a role in the upcoming August 17 parliamentary elections.

“Thirty-two years have passed but racism still continues in the country and politicians use extremist groups like Bodu Bala Sena as a tool,” the priest said.

On July 24 in Colombo, activists demonstrated to mark the anniversary of “Black July”.

Kumari Kumaragamage, a Sri Lankan writer and poet who attended the demonstration, said Sri Lankans have not learned the lessons of the past.

“Violence against Tamils and Muslims still continues,” she said. “Therefore, we should protest to say ‘no more violence’ in the country.”

“We should pressure the government not to give room to spread racism in the country,” Fernando said.