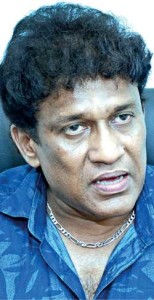 First, we are representing the Tamil people who are residing outside the Northern and Eastern Provinces. The Tamil population in the country as per the 2011 census is 3.2 million. Nearly 50% out of this population, that is about 1.5 million, live outside the Northern and Eastern Provinces, namely the Central, Western, Sabaragamuwa, Uva, North-Western and Southern Provinces; that is, in the Districts of Nuwara-Eliya, Kandy, Matale, Colombo, Kalutara, Gampaha, Ratnapura, Kegalle, Badulla, Monaragala, Galle and Puttalam. We are representing these people. What I mentioned was the geography. The demography is this. We have three segments of Tamils living in these areas. First is the Up-Country Tamils who live in the central region, second is Tamils who have migrated from the Northern Eastern Provinces and settled in the Western Province and thirdly Tamils who are neither of upcountry origin nor North Eastern origin, but born and bred in Colombo who are mostly Indian in origin, primarily speaking Tamil, a little Malayalam and Telugu and following the Hindu, Christian and Islam faiths. Our Alliance represents all three segments.

[The]local communities and the international community (IC) considered that the Tamil problem in this country centred only in the Northern Province. Therefore they consider the TNA as representing all the Tamils in Sri Lanka. Both these stances are wrong. The Tamils living outside the Northern and Eastern Provinces are technically ignored. We primarily represent them. I wanted to bring these facts to the attention of the Srilankan communities and the international community. Tamils in the South should receive national and international attention. We have not obtained reasonable attention in the nation after delivering nearly 650,000 Tamil votes in the seven provinces outside the North and East at the last presidential election.

However, I do not want Tamils in the South to get attention at the cost of Tamils in the North and East who had suffered historically.

Today is different from the LTTE Time

The other issue is when the LTTE was ruling, it was a fight for a separate Tamil state. So the total attention was on the LTTE. People who were not in an agreement with the LTTE were voiceless. Now the LTTE is not there. The separate Eelam demand has been dropped. Even the TNA has stated that they would settle within an undivided Sri Lanka. We too are part of this undivided Sri Lanka. Hence, we demand attention. As political parties, we were performing separately. Now we have come together establishing a powerful leadership. It is the TPA.

I do not see any national party with a Sri Lankan identity. Even the UNP is a Sinhala nationalist party with liberal faces, and so is the SLFP. So until these parties transform themselves as real national parties we, the minority communities, will have to establish our own ethnic platforms. Theoretically I follow the concept of Sri Lankan nationalism. But in practice I am forced to conduct my party on ethnic lines. Take India; despite all those religious and ethnic tensions, the majority of Hindu leaders are following a well-guarded policy of accommodation. A Muslim can become a President of India. A Sikh can become a Prime Minister there. The Khans can rule the Indian Cinema. You have minorities performing in many fields in India with their merits. This is the general situation in India. But it does not happen here. We are living in ethnically charged conditions.

Veluppillai Prabakaran did not create these conditions. But he contributed to this situation and it has become worse. But this situation was there since independence, well before Prabakaran came into the equation.

I can not be the President Because I am a Tamil

Founders of both the UNP and SLFP should be blamed. Let these parties as elder brothers, change, and we as younger brothers will follow. Those who demand me to dissolve my party and join a major party should address this dark reality. If these issues are addressed I will dissolve my party and join a major party or transform my party into a multi-ethnic one. I want to be the President of this country. I believe I am qualified to be so, but because I am a Tamil I cannot be so.

The whole country faces the national issue. The central point of this is power devolution. The power sharing is demanded by the TNA and also the Muslim parties. But when it comes to the South, primarily to the up-country, the Tamil community is sidelined. The policy makers mix up the trade union demands with political demands. Out of the 1.5 million Tamils who live outside the North and East, only 250,000 are plantations workers. The rest do not belong to the working class. They are professionals, industrialists, farmhands, traders, state and private sector employees. It is wrong to identify the whole community as plantation people and consider the issues only as plantation trade union issues. We will meet the trade union issues at the trade union forum. But now we have a political forum too. It is TPA. The backward-looking up-country leadership was keeping our people isolated for their own self-centred reasons. But we are looking ahead and are progressive. Our demands are going to bring our people into the national mainstream and limelight. The progressive demands would help us to live with equality and respect among the Sinhala community in peace.

I can give you one example. The lowest layer of power sharing in this country is Pradeshiya Sabha (PS). The nation has some criteria for the PS. There are Pradeshiya Sabhas for nearly 15,000 people in the eastern and northern provinces. For example Vavuniya south bordering Anuradhapura has a Sinhala population of about 10,000-15,000. There is a PS. We welcome this. But in Nuwara-Eliya district, the Ambagamuwa PS and Nuwara-Eliya PS have a population of 200,000 each. It means we have just two Pradeshiya Sabhas for a population of 400,000. This is serious discrimination. We demand these two Sabhas to be fragmented and made into at least 15 Sabhas with a population of nearly 26,000 each. This demand has never been considered by this government or previous governments.

TNA officially demands the merger of the northern and eastern provinces. SLMC demands to merge Muslim areas towards a coastal Muslim district in the east. We can also demand to the merger of the Ambagamuwa PS and Nuwara-Eliya PS to be made into a separate district. But we are not asking for such a merger. We require just the opposite. It is for the governmental arm, the administrative power, democratic legislative power, to reach the most deprived people in the upcountry.

Also equality of the Tamil language is a serious issue in our areas. Tamil is a national language but it is restricted to paper. A bi-lingual policy should be implemented in all the provinces with strict state monitoring. Also we demand one Tamil Minister each in the cabinets of Central, Uva, Western, Sabaragamuwa and North Western PCs of the said provinces through an arrangement in the PC law. We have this in the Central and Uva for the time being, but without legality. The law restricts cabinets of the PCs to five, with the CM. Make it three Sinhala Ministers, one Tamil and one Muslim Minister. That would be fair and would support the reconciliation in this country.

– Excerpts  from an interview published in the Daily Mirror