Before more women enter booming, male-dominated sectors, what about harassment and violence? And who does the housework? “Unless men enter the kitchen, women cannot enter politics,” a leading activist told a recent U.N. forum. 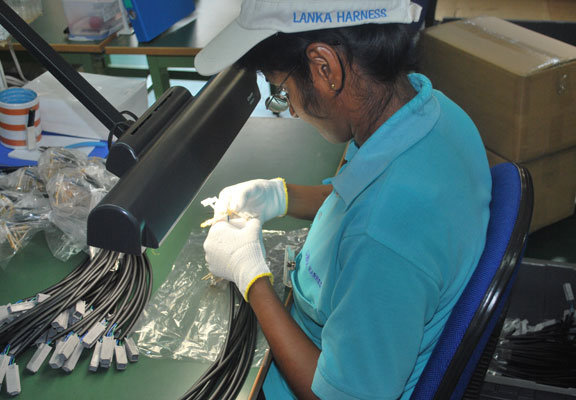 (WOMENSENEWS) –The nimble fingers that pluck the leaves to make Ceylon tea, the island’s best known brand and top agricultural export, belong to women. So do those that sew garments, the main industrial export, shipped to the likes of Victoria’s Secret.

And female housemaids employed in the Middle East form almost half of the island’s migrant workforce, whose remittances are now its biggest source of foreign exchange.

But a post-war construction and export boom are turning the spotlight on female workers in a new way.

Now the government wants them to join such male-dominated sectors as construction and Internet technology, which have propelled annual economic expansion to 7 percent, the highest in South Asia.

“With unemployment falling, most new jobs will be created for women,” Harsha De Silva, deputy minister of policy planning and economic affairs, told a Colombo forum in March to launch a United Nations report. “Seventy percent of the workforce is now made up of men.”

Male joblessness is below 3 percent, about half the rate for women. And as worker shortages prevail throughout the economy–from agriculture to industry–the need to get more women to work is urgent.

But women’s rights activists also see this as a moment to ask their own urgent questions. What will happen to women, in the form of violence and harassment, if women take jobs far from home? What is the plan to help women contend with domestic work and responsibilities? Who will handle this so-called second shift?

“Whether you’re an agricultural or office worker you need child care,” Shanthi Sachithanandam, chief executive of Viluthu, a civil society organization, told the U.N. gathering in March. “That would revolutionize women’s entry into the job market.”

Like other women’s rights activists, Sachithanandam is reluctant to encourage women into male-dominated sectors until there is some assurance about who will be handling “the second shift,” as unpaid household work is widely known.

Wimal Nanayakkara, senior visiting fellow with Colombo’s Institute of Policy Studies, agrees, saying new policies are needed to encourage women to join the formal workforce. “We must make it easier for them (women) to balance child care responsibilities with work. So we need to create jobs closer to home and have flexible working hours for women.”

Viluthu, Sachithanandam’s group, has been making use of opportunities opened up in post-war Sri Lanka to raise funds and encourage more women to contest local government elections.

She is pleased that the government is considering a women’s quota system for local races. But the two types of politics–sexual and electoral–don’t work without each other, she says. Her group has a motto: From stove to politics it should be 50-50.

And part of that 50-50 deal is improving women’s safety and freedom from harassment.

“Families are actually scared of sending women to work,” Sachithanandam told the U.N. forum. “So ending violence is important in encouraging women to seek non-traditional jobs in the private sector.”

Women hold less than 7 percent of the seats in Sri Lanka’s parliament. Female politicians face the risk not only of character assassination and verbal abuse but physical attacks as well, since election violence is routine.

The January presidential polling that toppled the autocratic Mahinda Rajapaksa regime was a peaceful exception. Though during it, a male ruling party politician did threaten to strip naked Chandrika Bandaranaike Kumaratunga, a former female president, and parade her in public, for supporting the then-opposition party.

The threat may have been rhetorical, but the graphic language drew strong protests from women and shows why women might hang back from politics.

“Politics is seen as a man’s world. It happens in a violent environment,” Visakha Tillekeratne, an independent activist, said in a recent phone interview. “Also, women are not schooled in politics and political behavior.”

There are no statistics kept on the incidence of sexualized violence in Sri Lanka, but Tillekeratne worries that long hours of travel to work could expose women to sexual harassment, robbery and rape.

“We have to assure safe transport for women and safe child care and day care for mothers,” Tillekeratne, a food and technology consult by profession, said. “Since there are no safeguards, even educated women focus more on motherhood and abandon their future careers. One of the common issues faced by women at work and on their way to work is sexual harassment; these include inappropriate touch, asking for sexual favors and seductive jokes.”

But she added that more workplaces are adopting policies against sexual harassment.

Nimalka Fernando, a lawyer and president of the International Movement Against All Forms of Discrimination and Racism, based in Tokyo, said entrenched attitudes play down the contribution of women.

“We are talking about change in Sri Lanka. But media and the mindset of men and women in our society refuse to accept that there were women who worked for change,” she said in a recent email interview.

Grassroots level work done by Sachithanandam’s group Viluthu shows why women are better represented in certain jobs or sectors. Seventy-five percent of teachers are women, for instance, because schools close at 2 p.m. and they can go home early to see their children and cook for the night.

“We found women had to face not only demands of being employed, but also must conform to social norms,” Sachithanandam said. “There’s a lot of policing of their behaviors. So they chose employment that suited that behavior.”

She sums it up this way: “Unless men enter the kitchen, women cannot enter politics.”

Chandani Jayatilleke is a Colombo-based journalist, who contributes to several international publications.
http://womensenews.org/story/labor/150505/sri-lanka-bid-female-workers-raises-questions