HomeFeaturesReport: Suppression of Dissent During the 100 Days of New Govt. – INFORM

Compared to 2014 and the Rajapakse rule, the intensity and number of attacks, threats and intimidations against dissent has decreased during the first 100 days of Sirisena’s Presidency. However, very little action appears to have been taken to deal with the impunity of past incidents, and alarmingly, there were several incidents of suppression of dissent. 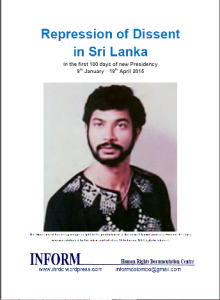 In Colombo, civil and political activists distributing leaflets on 19th February were attacked by members of the pro-Rajapaksa National Freedom Front (NFF) at Nugegoda. The leaflets contained the text, “Ten Questions for Wimal Weerawansa and Vasudeva prior to the Yakshagamanaya” and were distributed by members of the Democratic People’s Forum. The Inter-University Students’ Federation (IUSF)’s protest march was attacked on 31st March by the Police and the Special Task Force, with some students injured and hospitalized. The Defense Ministry informed the director of a film about the slain journalist Richard de Zoysa that the subject matter would be inappropriate, as it recalls an unpleasant past, and informed the director that he will not be given permission to shoot the film.

In the North, Sri Lankan military dressed in civilian warned the displaced people in a military run high security zone against discussing their living conditions with the British Foreign and Commonwealth Office Minister, Hugo Swire. A distributor of the Tamil weekly, Ithu Nam Theasam, a pro Tamil National People’s Front (TNPF) paper, was threatened by military intelligence. In another incident in the North, drunk police officers in jerseys stopped three journalists, threatened them with knives and chased after them. Perhaps for the first time in history, a journalist (specifically, a Tamil journalist from North) was arrested and detained by Police for “providing false information for the publication of a news item.” The Terrorist Investigation Division (TID) also summoned the Chairman of the Vavuniya Citizens Committee, while the activist Buddhist monk Ven. Wataruka Vijitha Thero was harassed by police officers.

Journalists of two private TV stations accused each other of illegal entry and assault respectively. Several persons were arrested and equipment was confiscated in Colombo, based on the accusation that they were cooperating with UK-based Channel 4 TV station, which has earlier produced documentaries accusing the Sri Lankan military of war crimes. One of the accused had an overseas travel restriction placed upon them.

It was reported that a journalist was assaulted in Puttlam, in relation to reports of individuals attempting to sell government lands.
While the detention without charge of the Woman human rights defender Balendran Jeyakumari ended on the 10th March, an overseas travel restriction was imposed on her and she was required to report monthly to a police station. Investigations in her case continue. Restrictions on freedom of expression and movement of INFORM’s human rights adviser Ruki Fernando continue, and the investigation against him is also still ongoing.