It has been a calm week in Colombo after the 19A storm of the previous week. It is a different story in Britain, where the Tories have won a stunning majority after all the predictions about a hung parliament and Scottish king makers going to London. The Liberal Democrats who were David Cameron’s coalition partners have been decimated. The Labour has been gutted with the Scottish Nationalist Party (SNP) sweeping 56 out of the 59 seats from Scotland, which have traditionally gone to the Labour Party. But the SNP must also feel robbed of its glory by the Tory majority, which will cut them to size in London despite their swelling in size in the Highlands. The notorious UKIP (the new Independent Party of the United Kingdom that wants the UK out of Europe and immigrants out of the UK) has fared disastrously, and deservedly so, retaining just the solitary seat it won in a by-election after 2010. Stars are smiling on David Cameron, even without astrological help, as he now gets to stay put at 10 Downing without any coalition prop. The Labour unions are left to rue for picking the wrong Miliband brother (Ed instead of David) to lead their party. There will be much to write about Britain for next week. 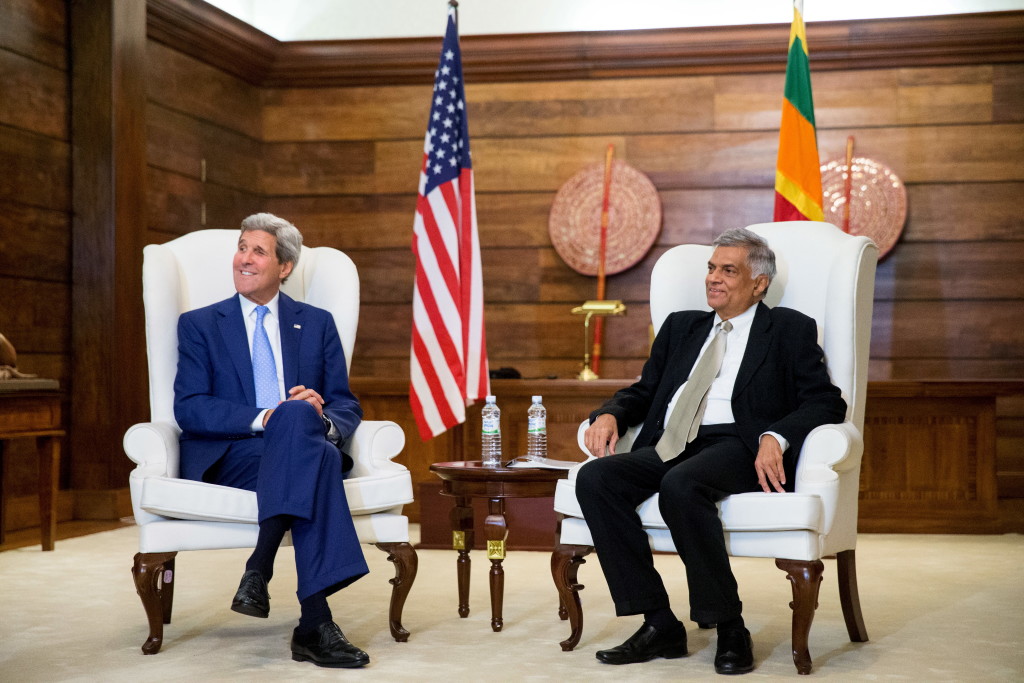 The week in Colombo saw the US Secretary of State John Kerry come and go, as did the meeting between MS and MR, the current and former Presidents of Sri Lanka and the Sri Lanka Freedom Party. Nothing came out of the meeting for all the ballyhoo that preceded it. MR is becoming a phenomenon in seemingly futile search of lost power, while MS has become a different phenomenon – exercising power by shedding it. The difference between the two set the backdrop to the visit of Secretary Kerry. Colombo is not a regular port of call for top drawer American politicians and officials. And Sri Lankan politics has traditionally been disproportionately more exercised about the US than the extent of the American government’s interest in Sri Lanka. Americans, enjoying absolute advantage more than any other people on the planet, know very little even about Canada, their geographically vast neighbour to the north; so they can be excused for not getting excited about far way islands like Sri Lanka. But are things changing?

Mr. Kerry perhaps alluded to these changes in his prepared statement of diplomatic significance at the end of his visit. Talking about changes, John Kerry is not John Foster Dulles, the 1950s Cold War Secretary of State under President Eisenhower. And today’s connected world is very different from the Cold War world. There are conflicts in spite of, and may also be because of, connections, but today’s conflicts are different from the conflicts of the Dulles era and the decades that came after. Post World War II American imperialism, which became the ritual burden of the annual ‘external resolutions’ of Sri Lanka’s Old Left, is now for all intents and purposes a collectors’ item in the world. One cannot use the old yardstick to measure or understand anything today. This is not to suggest that the US has suddenly become the white knight in world affairs. Far from it. But in the dynamic between Sri Lanka and the US, it is fair to say that Sri Lanka can gain much from the power of the American example as a constitutional democracy without ever becoming a victim of American power.

Secretary Kerry spoke of today’s world where “everyone and everything is connected”, and in this connected world, he offered help for Sri Lanka to succeed in its own plan for the future without trying to “usurp that or evade that or dismiss that.” And “as friends”, he went on to “offer four possible areas for co-operation”: reconciliation; justice and accountability; advancement of human rights; and the strengthening of democratic institutions. Sri Lankans may not be unanimous about the topicality of the four areas for the island’s future, but few will disagree that the results of the January 8 election have brought these areas into emphatic political relief from what they were before the election, and under the previous government.

Before January 8, these areas were not of concern to the Rajapaksa government. The then government dismissed them as external interference and unpatriotic collusions. That led to the Sri Lankan government’s isolation in the world and its indictment in Geneva. What is also becoming evident is that the mantle of patriotism was abused by the previous regime as a cover for the spread of systemic corruption and nepotism in government. It is this evidence and the experience of it that is preventing the further abuse of patriotism to protect the wrongdoers of the previous government. Not for the lack of trying, patriotism is not finding the critical traction beyond the orchestrated rallies to bring back Mahinda Rajapaksa to power. There were no rallies or protests against the visiting Secretary of State, because there is no Rajapaksa government around to organize them. Under the Rajapaksas, it was a case of “rocking the cradle and pinching the baby at the same time”, in regard to the government’s relationship with the US (and the West). They sent their storm troopers to raise hell in front of the US Embassy in Colombo, while spending huge amounts of money to retain American lobby firms to influence US policy in Washington. For all the allegations of western conspiracy to defeat Mahinda Rajapaksa in the January election, there was not a hum on the road against the visiting Secretary of State. Only an odd placard, “John Kerry, go home. Don’t turn Sri Lanka into Libya”, was seen at the pro-MR May Day rally, the same rally where a university academic was attacked.

Traditionally, political attitudes towards the US in Sri Lanka have followed the class and status contours of our society. The elites and the upper classes, and their political party, the UNP, were identified as pro-American, while the politics of anti-American imperialism was a key plank in the platform of the Old Left and its coalitions with the SLFP. These differences, while they may have not totally disappeared, have lost not only their political representation but also their relevance. Sri Lankans of all social strata are now ‘interacting’ with America in increasingly large numbers as individuals, without any political baggage, in education, in professional practice, trade, and through extended families. The Rajapaksas can only blame themselves for triggering a politically successful alliance between the UNP and a section of the SLFP. And the new UNP-(half) SLFP alliance seems to be more representative of the changing Sri Lankan society than diehard patriots and old school anti-imperialists.

The comprador class that sustained the UNP is long gone. It has been replaced by waves of new arrivals in business, and the newer than new among them nurtured the Rajapaksas and were in turn nurtured by the Rajapaksa government. The symbiosis of corruption between the two that was established in government before January 8 is now the provider for the pro-Rajapaksa opposition to the new government that came after January 8. In a twist of irony, the new Sri Lankan government is going to rely on American expertise, among others, to track and expose the financial corruption of the previous government and its business cronies.

That is all well and good, except for the claim of the Minister of Foreign Affairs that he has ‘spreadsheet’ evidence of past swindling to the tune of $18 billion. The people might be excused if they are taking the Minister’s word with a pinch of salt after his sensational allegations about a Rajapaksa coup on that long election night, that seem to have gone nowhere.

The main purpose of Secretary Kerry’s visit is not about the area of Rajapaksa corruption, but the four areas of co-operation which the Rajapaksas spurned and which the Sirisena-Wickremasinghe government is determined to deliver on. The fact of the matter is that the four areas where Mr. Kerry is offering American co-operation are not a Western imagination or imposition. They became an issue because the Rajapaksa government irresponsibly and intransigently refused to do anything about them. With a new government in place and given its willingness to positively act in regard to reconciliation, justice and accountability, human rights, and democratic institutions, the US government has to change direction from UNHRC confrontation to inter-governmental co-operation.

John Kerry’s visit and his offer of co-operation are an indication of the US changing directions in response to political changes in Sri Lanka. That is my reading of the visit from a bird’s eye view. Others more at home taking worm’s eye views might read differently, but such negative readings, I contend, would be at odds with current realities and emerging trends. Needless to say, taking a worm’s eye view is not a prerogative of Sinhalese extremists only. They will find good, or bad, company among their Tamil counterparts. President Sirisena’s challenge is to democratically marginalize the extremists and reinforce the moderates in all communities. To that end, he should take the US Secretary of State on his offer of co-operation in the four areas.
IS