The International Federation of Journalists (IFJ) and its affiliates the Free Media Movement (FMM) and the Sri Lankan Working Journalists Association (SLWJA) have called for more dialogue and discussion on improving working conditions for journalists in Sri Lanka if the country is to rebuild a strong, robust and professional media industry in the country. 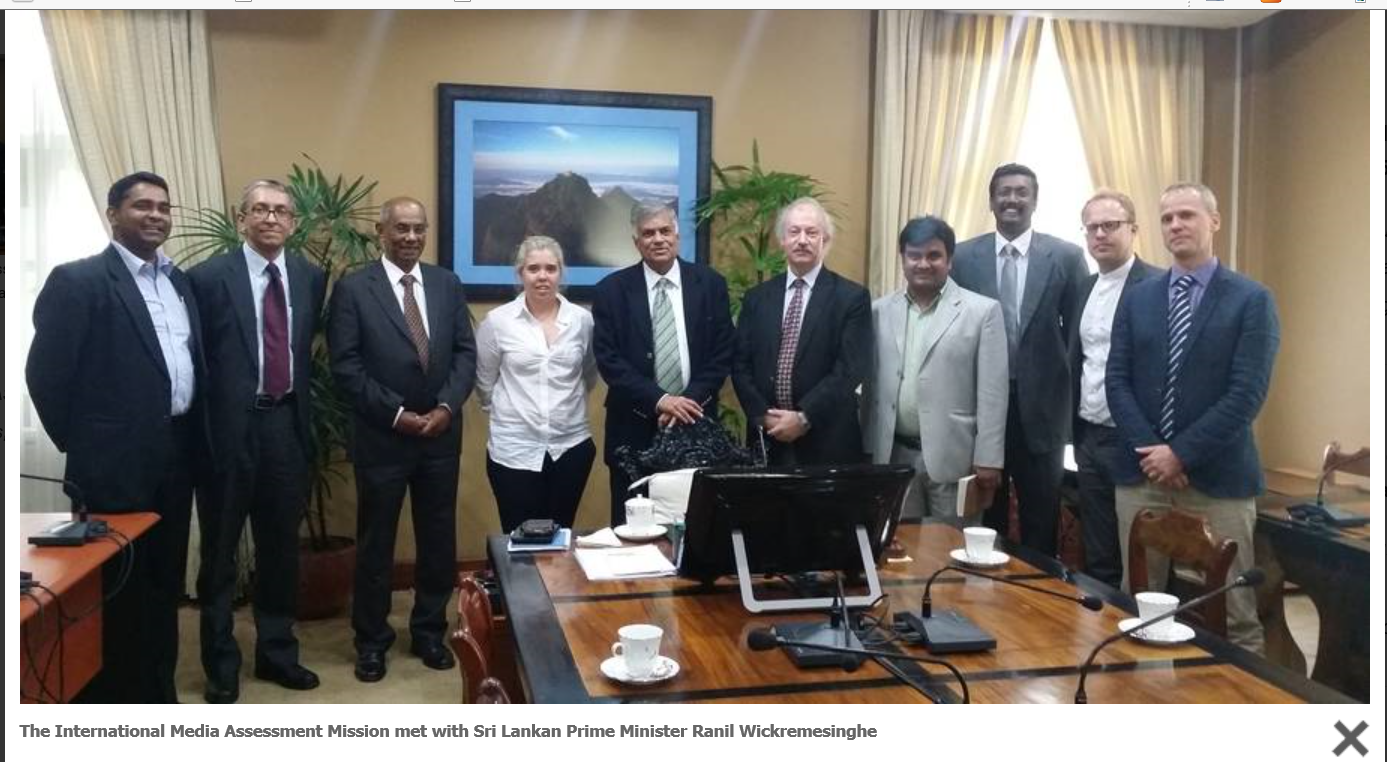 Mission members with the Prime Minster

The IFJ joined the International Media Assessment Mission to Sri Lanka from May 8 to 14 to follow-up on its recent assessments of media freedom situation since the January 8 presidential election. During discussions with government officials, the Right to Information Act (RTI) was also vigorously discussed.

While both FMM and SLWJA said the government has made a number of important positive steps in its media reform agenda; further work was still urgently needed to ensure the media industry in Sri Lanka is to grow and thrive. The IFJ affiliates particularly highlighted some of the obstacles preventing journalists from joining and being active in unions and said further support was needed for journalists in exile trying to return.

The IFJ said: “There is an urgent and present need to build the capacity of journalists and their right to advocate as an industry on working conditions as well as on press freedom issues in the North and East provinces. Importantly, efforts need to be made to bring journalists and their employers together to discuss and engage on the future of the industry.”

Increased training opportunities to support professional and ethical journalism and improved understanding and dialogue with media employers on journalists’ right to form were two of the key strategies highlighted by FMM and SLWJA as well as the long-awaited RTI Act.

The government overwhelmingly supported the RTI Act and provided the draft law to the mission. Prime Minister Ranil Wickremesinghe said the Act would be presented following the general elections, which legally must be held in Sri Lanka before April 2016.

The IFJ endorsed the issues raised by its affiliates and in its meetings with government. In the mission statement, a number of recommendations were presented, including:

· An independent Commission of Inquiry should be created with a mandate and adequate powers to investigate past killings of, threats to, disappearances of and other attacks on journalists, media workers and media outlets, with a view to ensuring that those responsible are prosecuted and that appropriate compensation is paid to the victims and their families.

· Media owners should recognise and support journalists’ and media workers’ right to form unions to negotiate and advocate on behalf of their members.

· A broad, multi-stakeholder consultation should be held to identify needs in the area of professionalization of journalists and media workers, and this should be followed up by a series of concrete actions to deliver on those needs.

The IFJ said: “We join the International Media Assessment Mission in welcoming the changes made by the government to ensure that media freedom has opened up across Sri Lanka. But throughout this latest mission we again heard of challenges for journalists including poor working conditions and pay scales and barriers being put in front of journalists when it comes to advocating on their rights.”

“The IFJ joins FMM and SLWJA in highlighting these issues and finding solutions for a stronger, more vibrant media industry in the country as the government takes on its media reform agenda.”

Last week’s mission follows an earlier International Media Solidarity Delegation to the country in March organised by FMM in cooperation with the IFJ, the International Press Institute and IFEX. Read the full statements of that mission here.

This month, the IFJ report The Freedom Frontier: Press Freedom in South Asia 2014-15 documented the press freedom in Sri Lanka over the past 12 months with a focus on the country’s impunity record and capsule reports on the North and East provinces.