If there is ever a time for political leadership to act in disregard of consensus, it is now. There was a time in Sri Lankan politics when that master rhetorician Colvin R. de Silva presaged the governing style of the SLFP-LSSP-CP United Front as one that would be “characterized not by consensus but by leadership.” Dr. Colvin’s foretelling was in anticipation of the massive United Front election victory in 1970. It turned out to be ill-advised at that time. But it is thoroughly appropriate at the present time. In politics, consensus is the preferred means to a desired end, but it is not an end itself. President Sirisena has the power to act and dissolve parliament and let the people elect a new parliament to end the current political uncertainty in parliament and in the country. Will he do it? That is the 100-Day question. And there will not be much else to talk about the 100 Days if parliament does not pass the 19th Amendment on Tuesday, the day after tomorrow.

President Sirisena and Prime Minister Ranil Wickremesinghe obtained a mandate from the people on January 8 to change the constitution in a substantial manner. The 19th Amendment is the instrument to fulfill that mandate. It is an embodiment of the people’s will, of political compromise and judicial endorsement. There has never been anything so consensual like 19A, before in Sri Lanka’s constitutional politics. If the current parliament cannot muster the requisite two-thirds majority to pass the amendment, it deserves to be sent packing to the people. The President will have no alternative but to dissolve the truant parliament and call for a general election. Anything less will be an affront to the sovereignty of the people and a mockery of the constitutional provision affirming its inalienability. 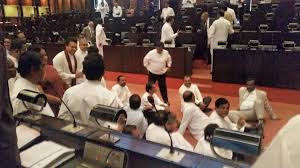 The remnants of the Rajapaksa regime in parliament and outside are bluffing. Bluffing, bullying, disrupting parliament and disobeying court orders are the last resort of politicians who have abused power, run afoul of the law, and who do not want to face the people in a free and fair election. In parliament, Nimal Siripala de Silva is trying to be too clever by half for his own endowments. GL Peiris, the long lost seed fallen on hard Rajapaksa rock, is trying hard for a moral rebirth, but in a crooked way. Between them, they are trying to pretend that they are saving the Jayewardene constitution from the machinations of his Party, the UNP! The 19th Amendment is not a UNP (or Ranil’s) off-spring. It is the outcome of the abolition (of the executive presidency) movement launched by Sobitha Thero and his band of constitutional reformers led by Jayampathy Wickremaratne. They drafted the basic outline of the 19th Amendment long before Maithripala Senanayake defected from the Rajapaksa government to become the common opposition candidate.

If at all, as the common opposition candidate, Maithripala Sirisena diluted the abolitionist position in order to accommodate the JHU who did not want to abolish the presidential system, but retain it with reduced powers. Much of the confusion over the 19th Amendment Bill is the result of trying to reach a compromise between abolishing the executive presidential system, and attenuating it. The final outcome, vetted by the Supreme Court, is not the perfect product but a significant correction to the current constitutional contraption – the unholy cross between the original Jayewardene framework and the recent Rajapaksa deformations. 19A represents the choice between: EITHER staying mired in the current contraption and its accompaniments, viz. abuse of power, corruption and embezzlement; OR, moving forward with a positively modified constitution providing reasonable checks and balances, to end corruption and achieve good governance. The (Kierkegaardian) choice (between unethical and ethical) cannot be clearer.

What will happen on Tuesday?

President Sirisena, in the course of his address to the nation on Thursday evening to mark the end of his first 100 days in office, called upon all parliamentarians to unanimously vote for the 19th Amendment, which finally is scheduled to be debated tomorrow and voted on Tuesday. Earlier in the day, addressing a UNP meeting, the Prime Minister is reported to have gone into an aggressive mode and warned that MPs who do not vote for the 19th Amendment will be swept away at the polls by the people. Brave words are still better coming late than never. The same day, the SLFP Central Committee (CC) issued a statement announcing its decision to vote for 19A in parliament.

The SLFP statement caught me by surprise because only a day before Nimal Siripala de Silva, the majority leader of the opposition, was insisting that a new (19th) amendment bill incorporating the determinations of the Supreme Court should be presented in parliament and referred to the Supreme Court for verification before it could be debated and voted on. Before that GL Peiris was making a nuisance of himself by carping against changes being introduced at the Committee stage. Even after the Central Committee decision, GL Peiris has been reported as saying that although the SLFP accepts 19A in principle, the Party will be moving amendments to the Bill in Parliament before the final vote. Go figure! And this comes after yet another Party Leaders’ meeting last week, when the government reportedly agreed to delete the provisions in the Bill that the SLFP was objecting to.

It would be great if the 19th Amendment bill is carried unanimously, but no one will count on it. Achieving a two-thirds majority that is required for the bill’s passage would itself be a singular achievement, but nothing can be taken for granted given the bluffing opposition and, so far, pussyfooting government. The question is what will the government do, if the amendment does not secure a two-thirds majority, or the opposition once again thwarts the bill from being debated and voted on April 27 and 28? There is only one answer: Dissolve parliament and call for a general election.

While it is imperative that the President must show leadership and dissolve parliament immediately if the 19th Amendment is not passed with the requisite majority, it will also be ideal for him to dissolve parliament even if the Amendment is duly passed by Parliament. However, there appears to some consensus about achieving electoral reforms after the passage of 19A, but before dissolving parliament. If that is so, it might be worthwhile to delay dissolution until the electoral reforms are in place. But it would be a grave mistake to let the SLFP opposition delay the passage of 19A until the electoral reform bill is also ready for the vote. Nor should the operationalization of 19A be made conditional upon the enactment of electoral reforms. In either case, the opposition should not be allowed to get away with its bluff.

There are about half a dozen different proposals for electoral reforms floating around, including a draft 20th Amendment on Electoral Reforms currently prepared by the SLFP. The President is reported to have presented his own proposals for electoral reform to the Cabinet of Ministers. The Tamil and Muslim political parties and the Left Parties have also had discussions and produced another set of proposals for electoral reform. Going by the experience of the 19th Amendment, can we expect the parliamentarians to act rationally and agree upon electoral reforms? Or, is it more likely that the opposition MPs will go on abusing parliamentary privilege to stage protests inside parliament against the legitimate and lawful investigations of corruption allegations of the high flyers of the old regime? Again, the President must show leadership and dissolve parliament immediately to prevent the Rajapaksa cronies from degrading parliament in defence of the Rajapaksas.

In fairness, no one should be considered guilty unless charges are laid and proven in court in accordance with the law. But the burden of proof is not, and should not be, on the government as has been mistakenly suggested. That burden must rest solely on the law enforcement agencies – the police, the investigating commission and the prosecutors. These agencies should, and should be allowed, to act independent of the government and even the parliament, as well as the President. Even the Rajapaksas deserve a truly fair process, even though they broke every rule and bent every norm to get rid of their opponents, including a Chief Justice and an Army Commander among others. But the process must go on, without being sabotaged by those within the government and disrupted by those in the opposition. That would be good government, for starters.
IS