HomeNewsSC Examines Provisions of 19A: Lawyers Battle Out On Pros And Cons 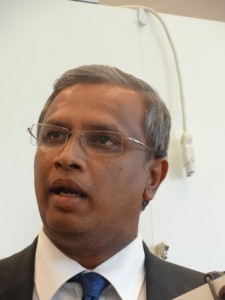 Provisions of 19A not inconsistent with Constitution – Sumanthiran

Making submissions before the Supreme Court, he said that the proposed Amendment need not be subjected to a referendum. He also pointed out the prime objective of the proposed amendment to the Constitution is to transfer the powers vested in one person to the Cabinet of Ministers and to Parliament. Sumanthiran made these observations as an intervening petitioner when the petition filed by Attorney-at-Law

The petitions were called before three judge bench of the Supreme Court comprising Chief Justice K. Sri Pavan, Justice Chandra Ekanayake and Justice Priyasath Dep. Several petitions and one intervening petition have prayed to Court to make a pronouncement declaring that the proposed amendments to the Constitution be passed by two a thirds majority in Parliament and also by the people at a referendum as some of the clauses in the proposed Amendment are contrary to the Sri Lankan Constitution. The other intervening petitions have stated that holding a referendum is unnecessary.

Meanwhile, Attorney General Yuwanjan Wijeyathilaka informed the Supreme Court that “contentious” clauses of the 19A have already been amended. He said Parliament, is expecting to pass an amended version of the 19th Amendment. He also presented copies of the 19A to the Supreme Court as well as to the lawyers appearing on behalf of petitioners.

Attorney-at-Law Gomin Dayasri who filed the petition against the 19th Amendment to the Constitution made a lengthy submission in support of his petition stating a referendum should be held over provisions of the 19A.

Gomin Dayasri submitted that the section 14(a)1 of the proposed Amendment is inconsistent with the Constitution and affects the fundamental rights of the people. He added that this proposed Amendment guarantees the fundamental rights to the non-residents of this country in violation of the Constitution which guarantees those rights only to the residents of Sri Lanka. He submitted that this would be a threat to the national security.

He also said this could damage the image of the country and various parties can use such information with a malicious intention. He also pointed out that as the fundamental rights law is applicable only to the executive and administrative processes, the right to information should be confined to the officers under executive and the administration but to all.

He also pointed out that although the English and Tamil Language translation of the 19th Amendment Bill refers to two third majority. It is questionable that the Sinhala Language Bill refers to a simple majority.

At this stage Chief Justice K. Sri Pavan observed that this proposed Amendment is for the existing Amendment to the Constitution. He also observed that the responsibility of the Judiciary is only to decide if a referendum is required to pass this Bill in addition to two thirds majority.

Attorney-at-Law Dayasri further stated that making the minimum term of Parliament before dissolving affects the right to vote of the voters.

Attorney-at-Law Suren Fernando appearing for the intervening petitioner M. Musthadeen submitted that the sections in the proposed amendment with regard to the right to information is not adequate.

President’s Counsel Manohara de Silva appearing for Udaya Gammanpila who filed the petition against the proposed 19th Amendment submitted that with this Amendment the President who is elected by the people’s vote will be confined to a rubber seal. He added that this Amendment would change the basic frame of the Constitution and it would affect the executive powers and the people’s sovereignty.

He added that the President can take only two ministries under him according to the proposed Amendment.