Fundamentalism knows no boundaries. In India, it was Perumal Murugan who announced the death of the writer in him. In Sri Lanka, writer Sharmila Seyyid was ‘raped’ and ‘murdered’ online on March 28, marking a new low in the history of intolerance. If casteist and Hindutva forces drove the writer in Mr. Murugan to death, it was fundamentalist Muslim groups who ‘killed’ Ms. Seyyid online. A seemingly real news report of the event, accompanied by a gory photoshopped picture of Ms. Seyyid’s body, went viral. Its impact was so real that her family and friends rushed to her home in shock and sorrow.

Her father Seyyid Ahmed wrote in his complaint in Eravur police station in Batticaloa in eastern Sri Lanka that there has been a concerted effort to incite hatred in the Muslim community against his daughter. Threats of kidnapping were also sent to Ms. Seyyid’s younger sister. It has become hard for the family to live in the community amidst all the rumours and suspicion, Mr. Ahmed said. He greatly fears for the lives of his daughters and their children. 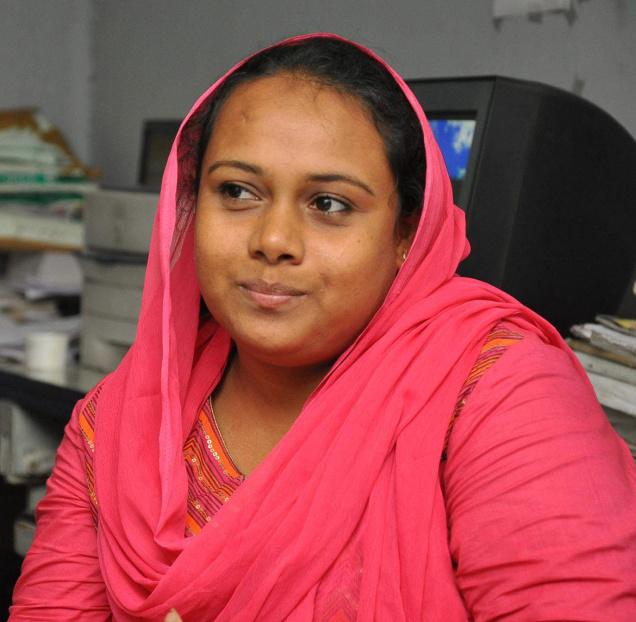 Speaking Up: “Sharmila continues to be in partial hiding, fearful of her child’s safety, but still bold and confident.”

Ms. Seyyid, a single mother, journalist, activist and writer, was barely 30 when she was in the eye of the controversy that forced her into self-exile from eastern Sri Lanka. She has a graduate degree in journalism, and is the founder-president of the Organisation for Social Development, established in 2009, a community-based organisation in Eravur. On November 18, 2012, she was interviewed on BBC TamilOsai after her first collection of poems Siragu Mulaitha Penn (The women who grew wings) was released in Sri Lanka. Justice Minister Rauff Hakeem, speaking at the event, highlighted a few of her poems, one of which one was about sex workers.

In response to a question from the BBC reporter, Ms. Seyyid said that legalising sex work would help protect sex workers. This was interpreted as endorsing prostitution, considered haram in Islam. The threatening calls began soon after. By the next morning, Ms. Seyyid had received hundreds of missed calls on her mobile phone. There were news reports that condemned her for supporting sex work and the social media joined in.

Ms. Seyyid issued a clarification explaining that she was only highlighting a social reality and did not intend to defy Islamic tenets. She expressed regret for unwittingly hurting people’s sentiments. But when clergy compelled her to retract the statement, she refused. An English academy she ran along with her sister was damaged in an attack and an attempt was made to burn it down. She fled Sri Lanka soon after, but the online world continued to watch her every move and hound her. She has been warned repeatedly for posting photographs on Facebook of herself without a purdah. When she posted a photo album of selfies with her son, she was warned for posing playfully like a ‘mendicant in penance’.

Ms. Seyyid has published two poetry collections so far. Her novel Ummath not only exposes the injustices meted out by Tamil nationalists to Tamil-speaking Muslims in Sri Lanka, but also critiques the Talibanisation of the Muslim community in eastern Sri Lanka. Both her poetry collections and her novel have received awards from the Tamil Nadu Progressive Writers and Artists Association.

Some sections from her novel that question the practice of purdah have been widely circulated online. Ms. Seyyid writes, “Questions about covering a woman’s face… are crying out for clarity and resolution. It is not just a question of covering a woman’s face, (but) her whole body and the clothes and accessories that embellish it are shrouded over by force. Islamic society continues to not only force its womenfolk to stay in an environment that makes no concession to contemporary realities and the liberalising trends of the times but is in fact regressing into increasing rigidity. The stand taken by Islamic fundamentalists on issues such as women’s rights is often most condemnable and quite contrary to common sense and reason. The fundamentalists, appropriating for themselves the role of guardians of the society, have set up their own illegal panchayats, making it impossible to give reality to the dignity and the rights of women that the holy book, the Koran, has taught us…. The practice of wearing a head-dress and facial veil is an Arab custom and was brought to other countries as part of commercial ventures. Our dominating men have been successful in convincing women that these commercial products are a part of Islamic culture and tradition. Islamic women have, therefore, started wearing them as symbols of their identity and also because they fear that refusing to do so would stigmatise them as unchaste, anti-Islamic and even brand them as prostitutes!”

In mid-March, an audio recording made news and was widely shared and heard online. It was of a high-ranking Tamil Nadu police officer in a lustful telephonic conversation with a woman subordinate. But the photograph that accompanied it in online reports was Ms. Seyyid’s. It is not clear if this was deliberate or merely an act of negligence. Shocked, but never one to take anything lying down, she condemned it on Facebook and, with several friends, strongly protested against the websites and social media pages that published her photograph. She succeeded in temporarily taking it off the web.

It was at this point that some Muslim fundamentalist groups from Tamil Nadu, Sri Lanka and West Asia began an organised attack on Ms. Seyyid. Her photograph is now being deliberately circulated along with the audio recording; and her name defamatorily linked with the scandal. But before this the groups sent her a warning: she was to remove all of her photographs without purdah from Facebook within 24 hours. The attacks began when the warning went unheeded and ended with her ‘rape’ and ‘killing’.

Liberal Muslims are protesting loudly online. Women writers and liberal Muslim writers joined to organise a protest meeting. Under the umbrella ‘Pen Veli’, a discussion forum was launched in Chennai on March 5, to protest the continuing attacks on women by Islamic fundamentalists. The speakers categorically condemned the attempts to defame women and Islam by fundamentalist groups. The acts of such groups were condemned as anti-Islam.

Ms. Seyyid continues to be in partial hiding, fearful of her child’s safety but still bold and confident. Sri Lanka’s Criminal Investigation Department has now registered charges of cyber crime against unknown persons. Of course, the culpable persons are not confined to Sri Lanka but are spread out across India and West Asia.

In Kerala, fundamentalists of all kinds joined hands to protest the ‘Kiss of Love’ movement. In the global Tamil sphere, they appear to be acting in concert to threaten the free expression of writers and artists.

There is no clash of fundamentalists in India, but a symphony that is now reaching a crescendo, against freedom of expression and existence, which is reaching across borders.

(Kannan Sundaram is editor of Kalachuvadu, a Tamil monthly, and is the publisher of Perumal Murugan’s Mathorubhagan. E-mail: kannan31@gmail.com)