HomeFeaturesNewsToursim and Human Rights in Sri Lanka:Dark Clouds over the Sunshine Paradise

Sri Lanka is a booming tourist destination. In 2014, 1.5 million people visited this holiday island in the Indian Ocean. With 102,922 visitors, Germany represented the second largest Western European tourism group and Switzerland, with 0,097 visitors, the fifth largest. But Sri Lanka is not simply an idyllic holiday destination for sun-seekers. It is also a country with many dark sides that include a 26-year civil war with crimes that remain unaccounted for, and an alarming human rights record. The oppression of ethnic and religious minorities has prevailed beyond the end of the war. During her visit in late August 2013, the then United Nations High Commissioner for Human Rights, Navi Pillay, accused the country of becoming increasingly authoritarian.

In January 2015, the incumbent president, Mahinda Rajapaksa, was unexpectedly defeated in the presidential election by his former ally, Maithripala Sirisena, by 47.58% to 51.28% of the votes. In his manifesto, Siriesena promised to tackle corruption, ensure protection of human rights, and restore the rule of law and democratic principles. Moreover, he has pledged that the power of the president will be reduced by abolishing the executive presidential system.

Sirisena has promised to implement a concrete programme, based on his election manifesto, in his first 100 days.

Although this may appear to be a positive starting point, an international, independent investigation into the war crimes committed by all sides and the concrete improvement of minority rights are not given priority in Sirisena’s programme. These two themes were missing entirely from his manifesto, which is unsurprising considering that he was given an important ministerial post in the government of his predecessor, Mahinda Rajapaksa. Furthermore, he took on the position of defence minister on an interim basis several times during the civil war. 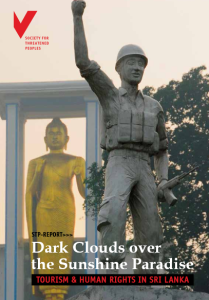 In spite of this poor human rights record, the Sri Lankan government promotes a country that has returned to normality. This image of a peaceful and prosperous holiday destination is marketed aggressively in Western Europe. However, this report clearly shows the sobering reality behind the  glossy brochures.

The previous Sri Lankan government defined the tourism sector as the key industry to boost its economy in the wake of the civil war. The profits from tourism are primarily intended to benefit the population. In order to make the development of new areas as socially and environmentally compatible as possible, the government’s “Sri Lanka Tourism Development Authority” (SLTDA) introduced minimal development standards, which must be respected by all parties involved. Thus, before realising any major tourism project, environmental and social impact assessments have to be conducted. In a similar vein, the permanent overdevelopment of coastal areas was also prohibited. Yet in reality, these minimal standards have rarely been sufficiently taken into consideration
neither by the government, the investors nor the military. The same applies to the human rights that were incorporated into the constitution.

MILITARY INFLUENCE ON THE TOURISM SECTOR

Despite the end of the civil war, military expenditure has increased continuously during recent years. In 2009, the final year of war, EUR 1.1 billion was reserved for military expenditure. In 2015 the budget allegedly amounts to is EUR 1.9 billion, which equates to 16.6 % of the projected national expenditure. The military is focusing this increased budget more and more on tourism with the army, navy and air force opening hotels all over the country and increasingly offering tourist activities. The provision of tourism opportunites by the military is problematic not least because it deprives the local population of an important source of income. Members of the military working in tourism receive their salaries directly from the military department. In return, the military sector secures a lucrative additional income through the tourism sector and is thus able to provide packages at lower prices than the private sector. The employees present themselves quite openly as members of the military, with some even wearing uniforms. The profits made from these tourist deals present a further issue because of the lack of transparency regarding their use.

THE LOCAL POPULATION HARDLY PROFITS AT ALL

To advance a reasonably controlled development of the island, the government has chosen four areas where tourism should be particularly promoted:
Kuchchaveli, Passikudah, Kalpitiya and Dedduwa. Our research focuses on the three regions of Kuchchaveli, Passikudah and Kalpitiya. These areas are very ethnically diverse and were rarely frequented by tourists during the civil war. In the meantime, numerous hotel complexes have been built there, which are offered by travel agencies in Germany and Switzerland. Our primary research interest is whether human rights have been violated in connection with tourism projects and to discern the degree to which the local population actually benefits from the tourism boom: How is it involved in local developments? What impact has tourism had on everyday life? Have local land rights been respected? What are the labour conditions like in the hotels and resorts?

The results are sobering: in all three regions the government’s minimal development standards have scarcely been observed. Environmental and social
impact assessments take place only sporadically and little is known about the findings. The local population is not consulted on the planning of tourism projects. Hotels and resorts block access to the sea, thus massively encroaching on the livelihood of local fishermen. Land grabbing is taking place and only a small part of the local population is able to make a living from tourism. The majority of hotel employees come from other Sri Lankan regions. There are no educational opportunities for the local population to cater to the needs of the hotels. Public facilities have had to make way for tourism projects.

Despite the alarming human rights record, at least 49 German and 21 Swiss travel agencies offer hotels in the above-mentioned tourist areas. We call
on all travel agencies to contribute to ensuring that tourism developers working in post-conflict areas act according to human rights principles. It is the corporate (social) responsibility and due diligence of the travel agencies to demand these principles consistently from their local partners and to verify their adherence on a regular basis. The United Nations Guiding Principles on Business and Human Rights (UNGPs) provide an important standard for the tourism industry. According to these Guiding Principles, businesses should prevent their activities from having negative effects on human rights and remedy any possible human rights violations.

This responsibility not only concerns their own activities, but also human rights impacts that are directly linked to operations, commodities and services involved in their business relations. Respecting human rights is not a passive esponsibility; it should be systematically integrated into all corporate processes. The Society for Threatened Peoples (STP) acknowledges the current and voluntary efforts of individual tour operators to incorporate human rights issues into their work.

However, the results at hand leave no doubt that, in Sri Lanka, such efforts do not suffice to effectively prevent issues such as the lack of consultation processes, expropriation of land, forced resettlement and restriction of access to the sea, as well as the lack of economic and social inclusion of the local populations in tourism development.

The complete report can be downloaded here:http://assets.gfbv.ch/downloads/pdf_e_langversion.pdf

– The Society of Threatened Peoples