Introduction-
In the West, International Women’s Day was first observed as a popular event after 1977 when the United Nations General Assembly invited member states to proclaim March 8 as the UN Day for women’s rights and world peace. Its theme for 2015 is ‘Make It Happen’ with a dedicated hashtag for social media. “Empowering Women, Empowering Humanity: Picture it!” is the Day’s UN theme for this year. Women’s Day is a day of international solidarity. In the recent past, women’s equality to men and women’s participation in government and politics were highly debated issues. There had been many struggles against ruling elites in many countries, who did not want to accept the rights of working women.

International Women’s Day is also a day for revisiting the strengths and challenges working women currently face. It is a day to honour women’s advancement and to remind the need for continued vigilance and action in the march towards equality in all aspects of women’s life. This is important because society’s thoughts about women’s equality and emancipation have significantly shifted. Undoubtedly, women’s’ status quo has improved significantly ensuring the availability of genuine choices for women. Hence, the focus of the International Women’s Day has shifted from being a reminder about the negatives to a celebration of the positives.

Women’s current status
Many of the Generations Y and Z believe that there are no more battles that they have to fight for. In many advanced capitalist countries, women’s social position and their rights have improved. With greater equality being legislated for women, increased management and leadership roles occupied by women, and with an increased visibility of women as impressive role models in all aspects of life, it is not surprising that they believe so.

Unfortunately, in some parts of the world the situation of women has got worse. More than one billion people live in poverty worldwide. According to Oxfam, 70 percent of those living in poverty are women. According to a World Bank report, in 2011, women accounted for forty percent of the world’s paid labour force, but only held one percent of its wealth. The World Bank also notes that in places where women’s paid work has increased significant contributions to overall poverty reduction have been achieved. Ruling elites in many countries do not have solutions to crises in their economies. Structural reforms to disadvantage working care including cuts to welfare benefits, education and healthcare, privatisation of state assets and services, have produced a depressive atmosphere against the rights of the working people, particularly of women.

In many areas of employment, women have not achieved equality. They are still paid less than their male counterparts in the same field , the number of women in business or politics is still small, and women’s education and health and violence against them are still worse. In many countries women face increased poverty, violence and sexual exploitation as economies collapsed. Their regimes have slashed childcare and public services, jobs have disappeared and societies have become fragmented. In many fundamentalist religious scenarios, girls and women face oppressive laws controlling their sexuality and behaviour.

To carry on the tradition of the International Women’s Day many parades, demonstrations, conventions and festivals are held worldwide, apparently to celebrate women’s achievements. The focus of these events vary from general celebration of respect, appreciation and love towards women to a celebration for women’s economic, political, and social achievements. In some countries, especially those of the former Soviet Union and Eastern Europe, International Women’s Day is still an official holiday. In other countries, it is not a public holiday, but is widely observed nonetheless. Several countries including former republics of the Soviet Union and Eastern Europe have gone back on women’s rights. International Women’s Day in these countries has lost its political character. Now it is celebrated like something in between Valentine’s Day and Mothers’ Day. Yet, the political and human rights theme the United Nations has designated to International Women’s Day remains influential in creating political and social awareness of the struggles women have carried out globally.
Despite the original intention to mark the inspirational struggle of women against gender based oppression at the workplace, today that key radical message and the political character appear forgotten in a commercially driven society. Gender based oppression at the workplace continues. Hence, this occasion provides an excellent opportunity to look at the origins of the movement, and assess the historical progress so far made and possible future directions of the international women’s’ movement for salvaging its real significance.

Historical legacy
International Women’s Day is a continuation of a tradition that began over a hundred years ago. It is a celebration and a recognition of achievements and accomplishments by women worldwide irrespective of their national, ethnic, linguistic, cultural, economic or political differences. It is important to remember the fact that this international occasion emerged as a result of the activities of the early twentieth century North American and European labour movements. Its origin was socialist and feminist, specifically calling for the celebration of working women and the mobilization of all workers to fight for women’s social, economic, and political equality. In 1908, female garment workers protested against their working conditions . It became a focal point of struggles for better working conditions and pay, and a political voice for working-class women internationally. It focussed on the oppression faced by working women as subjects of sexual, industrial and political exploitation .

In 1909, the Socialist Party of America established a National Women’s Committee, whose first action was to declare the Woman’s Day. Among its first tasks was to honour the movement for women’s rights and to build support for women to achieve universal suffrage. Despite this positive contribution by the left, it needs to be noted that the left and the socialist movement has had its own share of sexism. Later on this movement demanded rights to work, to vocational training and to an end to discrimination on employment and was extended to include the right to vote and to hold public office. The Charter of the United Nations (UN) signed in 1945 was the first international agreement to affirm the principle of equality between women and men. A central feature of the UN’s efforts to address social, economic and political challenges across the globe is to empower women. The UN agencies promote women’s participation as equal partners with men in achieving sustainable development, peace, security, and full respect for human rights.
Right to life 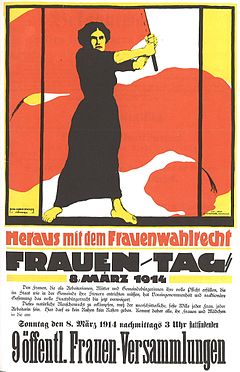 German poster for International Women’s Day, March 8th, 1914; English translation: “Give Us Women’s Suffrage. Women’s Day, March 8, 1914. Until now, prejudice and reactionary attitudes have denied full civic rights to women, who as workers, mothers, and citizens wholly fulfill their duty, who must pay their taxes to the state as well as the municipality. Fighting for this natural human right must be the firm, unwavering intention of every woman, every female worker. In this, no pause for rest, no respite is allowed. Come all, you women and girls, to the 9th public women’s assembly on Sunday, March 8, 1914, at 3pm

Even today in election campaigns, abortion is used as a political football to gain power, while women still suffer the consequences of illegal and botched abortions, and rape and domestic violence. Every year about tens of thousands of women die due to after effects of unsafe and illegal abortion. About half of abortions are carried out in unsafe conditions by unskilled personnel. High mortality rate appears to be due to laws prohibiting abortion and women’s right to choose. In many instances these prohibitions are religious based. Also limited access to contraception has led to unwanted pregnancies, and difficulties in accessing affordable medical care.

Many struggles and mass movements worldwide have pressurised regimes to adopt progressive changes in legislation. Some countries have changed their legislation to legalise abortion, while some of these have gone back or restricted their laws. Women’s right to choose not only means the right of abortion on demand but also the right to reproductive rights in general. It also includes their right to choose every aspect of their lives including free access to education, medical care, employment with equal pay and childcare. However, barriers such as money, dependence on family or husband, stipulations by the state and/or religion restrict their options. Women face the uncertainty of losing their jobs, houses, children and even their own lives.
Conclusion

Women’s movements have now acquired a global dimension and become a rallying point to build support for their rights and participation in political and economic spheres of life. More importantly, it is a forward-looking opportunity for continuing the journey towards ending discrimination against women and their full and equal participation in socio-economic and cultural development. In this video entitled The Journey of Women’s Rights: 1911-2015: UN captures the key moments of the women’s movements globally. Global economic inequality is growing with a lack of economic predictability or security. Issues of gender equity still remain a serious issue. Women have gained certain rights, though still they face grave disparities in income, occupation, and civil rights. In this environment, the founding spirit and objectives of the International Women’s Day remain relevant. The documentary reminds that March 8 is not a day only to appreciate what women have achieved, but also to appreciate the necessity to continue to demand and struggle for social, economic, and political equality.