Yesterday’s rally in Nugegoda organised by the hard-core Sinhala nationalists, i.e. Weerawansa, Dinesh, Gammanpila and Vasudeva with the blessings of former President Mahinda Rajapakse and their pseudo intellectual appendage Dayan Jayatilleke reminds us that the politicians who made a life out of Sinhala communalism/nationalism at the expense of a pluralist, liberal democratic Sri Lanka are well and alive. The defeat of the former government by a coalition of parties and civil society groups on January 8th 2015 has not dampened the spirit of these die-hard Sinhala nationalists. From the speeches delivered, it seems that these die-hard communalists are ever ready to beat the racial card citing a potential resurgence of the LTTE and division of the country by granting too much power to the Northern provincial Council by the new government. Unfortunately, there are millions of unsuspecting people in the Sinhalese heartland who still buy into such propaganda –though the veracity of this has reduced somewhat without ready access to state controlled media and those subdued media in the private sector for these nationalists/communalists. 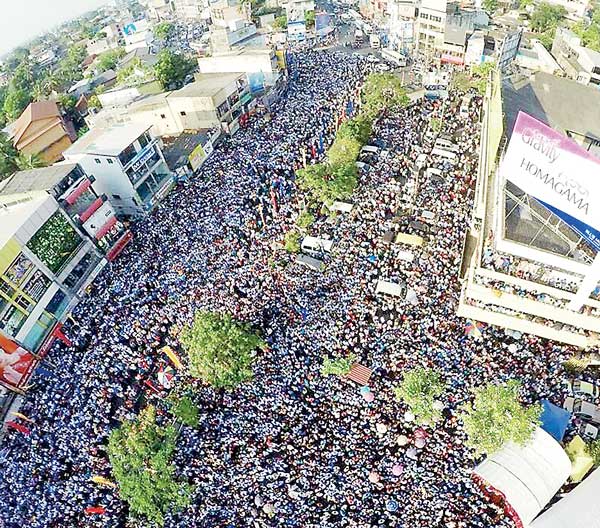 These die-hard Sinhala nationalists do not share the view that under Rajapakse rule, there were many violations of the rule of law and misuse of power and state resources for political and personal gain. The Rajapakse regime had three faces/projects: Firstly it had a patriotic face/project and corresponding messages where the rights and privileges of the majority Sinhalese were emphasised in comparison to those in minority ethnic and linguistic groups. Secondly, it had an economic project whereby those in the Rajapakse family and those close to them enriched themselves by virtue of the powers enjoyed by the all-powerful President. Thirdly, there was a security project centred on the control of armed forces and the police but also with the expansion into shadowy groups of armed and masked men. The latter included the underworld on one hand and outfits such as Rakna Lanka on the other hand. The die hard Sinhala nationalists who gathered at Nugegoda are emphasising only the first of these faces/projects in order to create fear among the unsuspecting people yet again, particularly from the lower strata of society, and encourage them to vote for them in the parliamentary elections. In other words, they are using the racial card yet again to gain power quite unashamedly.

Popularity of the previous President Rajapakse was, as some have reported, not a spontaneous phenomenon. The Rajapakse family manufactured it and the party operatives plus various government departments promoted the same at their expense as a well-designed project for long-term results. In this project, not only the Satakaya but also massively built cut outs, posters, propaganda through various media outlets reminiscent of Kim Ill Sung and his clan in North Korea, flooded the public spaces in the country. Various speeches given by the President in diverse venues reinforced his image as a guardian of the people and country who should remain in power for eternity. Furthermore, when he is no more, the sublime message delivered was that his son Namal should be the next in line for the Presidency. Gotabaya was providing necessary cover for this project from a security point of view.

To illustrate that the President is above everyone else and also very special, a luxurious life was built for him including hundreds of security personnel-if not thousands- whenever he travelled to locations within the country. His foreign travels were expensive affairs too. Power was concentrated formally and informally around the President and state resources concentrated in the hands of two brothers who managed important ministries in the defence and economic field. Thus the manufactured image of the former President as a war winning hero (while there were other heroes who went unrecognised) and someone who will bring prosperity to the country economically was transmitted very powerfully by using subtle and not so subtle means. A high degree of indoctrinating the minds of average people went on while curtailing the spaces available for free media and dissenting voices. Thus the millions of votes that he received in the last Presidential election is highly influenced by this manufactured image via state sponsored propaganda which reached rural Sinhalese heartland more so than the urban centres where there were alternative media spaces. Yet the die-hard Sinhala nationalists who gathered at Nugegoda and will gather in other towns in the weeks to come for sure are claiming legitimacy for the former President as if nothing of the sort occurred during his rule. In short, they are trying to ride on the manufactured image of the former President and the manufactured fear about an enemy,ie. Tamils and the West.

The voters wanted a change from the corrupt and wasteful system that was given sustenance by the Rajapakse family and mega dealers plus these die-hard Sinhala nationalists who are not able to command much credibility on their own in electoral contests but can survive under the Rajapakse project which is close to their own. A large turn out itself at a meeting cannot be a barometer of support as there are onlookers also who come to listen to political speeches at a time like this. Yet people have to be concerned about the messages delivered in such venues and the real,behind the scene economic and security projects of the politicians calling for the return of Rajapakse. Well-entrenched elements of the former regime are still operating within the system of governance as well as in the economy and polity and they are looking for ways to re-emerge in order to obtain state control in a hurry. If they succeed, it will be a great tragedy for Sri Lanka and those millions of people who wanted a change. The new government needs to establish itself firmly and keep a close eye on these developments while taking necessary steps to counter the Sinhala nationalist/communalist propaganda being delivered by failed politicians like Weerawansa, Gammanpila, Dinesh, Vasudeva and their intellectual yes men such as Dayan Jayatilleke.